The greatest power and the main negotiating advantage of workers who managed to win the gains that today’s workers hold as rights was their unity. 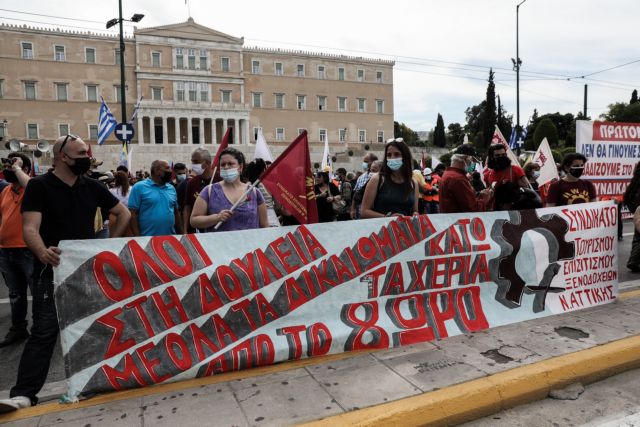 The spectacle was not unprecedented. It has become customary in Greece for the May Day strike to be marked by separate demonstrations by different trade unions, federations, and political parties.

This bizarre phenomenon of separate protest marches was more pronounced this year as participants could not even agree on a meeting time and place.

Half of the unions and labour groups held the strike marches on Tuesday and the other half yesterday.

If on this year’s Labour Day march – to which marchers had attached particular importance due to the imminent tabling of the government’s labour bill in parliament – trade unionists and party cadres proved unable to transcend the dysfunctions of the past, then obviously it behoves them to change their modus operandi.

If in the dress rehearsal for what Syriza called “the mother of all battles” – the fight against the labour bill - participants overlooked the need to forge a united front, then we are dealing with a glaringly obvious bid to exploit the commemoration for partisan gain.

Whoever truly wants to honour those whose rallying cry on 1 May, 1886, in Chicago was “eight hours for work, eight hours for rest, and eight hours for what you will”, and not just to garner votes from an orthodox-left-wing audience, should realise that trade unionist or party-based narcissism must be put aside.

May Day should be honoured with a single march each year.

The greatest power and the main negotiating advantage of workers who managed to win the gains that today’s workers hold as rights was their unity.

TANEA Team 7 Μαΐου 2021 | 22:24
Share
Δείτε επίσης
Περισσότερα άρθρα για Αγγλική έκδοση
Foreign media have even compared the government with Greece’s seven-year military junta Editorial: A necessary cleanup
Citizens have demonstrated they need of state support Editorial: The need for a steady social benefits policy
In the first phase of the pandemic the correct decisions were taken Editorial: Vigilance needed in dealing with Covid-19
Greek side is obliged to be, as it is, in a constant state of readiness Editorial: Composure
In the long term, liberal democracy is “condemned” to win Editorial: A serious mistake
The PM stressed that the tapping was legal Mitsotakis denies prior knowledge of phone tapping of Androulakis, pledges reform, tight oversight of EYP
Resignations are not enough, nor would a cabinet reshuffle or snap election suffice Editorial: Transparency now!
Citizens seek persuasive solutions to the problems of daily life Editorial: Restoring trust in political parties
Last year in Greece there were 17 femicides Editorial: An urgent wake-up call
Stavros Psycharis never allowed himself to become subjugated. He never censored. Editorial: The death of a journalist
Psycharis He began his long career at the Lambrakis Press in 1972 Renowned journalist, publisher, entrepreneur Stavros Psycharis has died age 77
It is inconceivable for the average citizen to be defenceless amidst major economic trials Editorial: A model programme
Greece now has experience and an enhanced plan of deterrence Editorial Ta Nea: Maintaining composure
'I truly feel that the future of humanity is dark' God at Ground Zero: How a Mount Athos monk fit 9/11 into Byzantine iconography
Hatzidimitriou shattered the stereotype that women are not good at maths Editorial: Worthy role Models