SYRIZA will “take into account the message of citizens by turning our attention to the future of Greek society while at the same time waging the battle of ideas in order to achieve the goal of victory in the general election”. 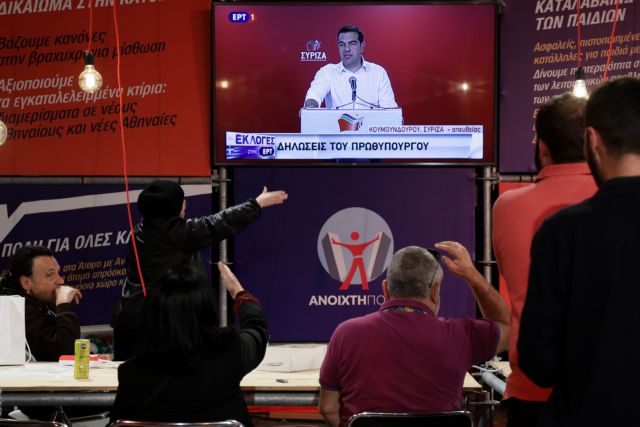 Ruling SYRIZA took the first uncertain steps at a marathon, four-hour meeting of its Political Secretariat yesterday in an effort to recover from its devastating 26 May electoral defeats and run an effective five-week campaign with all the cards stacked against it.

The party that from a base of support of five percent in the 2008 general election was swept to power in 2015 with 36 percent of the vote on a tsunami of rage against both a political system that led the country to bankruptcy and creditors who addressed the crisis with extremely punitive policies is for the first time in over four years pinned to the ground.

Prime Minister Alexis Tsipras’ remarks on the night of the election were strongly criticised by both the opposition and the press, both of which concluded that he did not give the slightest indication that he had understood and acknowledged the errors of his government and instead implied that voters had simply failed to recognise the utility and benefits of the stimulus package that he announced slightly over two weeks ahead of the European Parliament election, which he lost by a margin of nearly ten percentage points.

Following the imposition of a gag order forbidding party cadres to comment on the meeting in public, the party handed a sanitised version of what was said and decided to the state-run Athens News Agency.

The statement said that SYRIZA will “take into account the message of citizens by turning our attention to the future of Greek society while at the same time waging the battle of ideas in order to achieve the goal of victory in the general election”.

Top cadres reiterated Tsipras’ pre-election declarations that two discrete political plans for the future of the country will be pitted against each other in the campaign and that SYRIZA will run on the government’s accomplishments and will present its programme for the next four years.

It will again depict main opposition New Democracy as a neo-liberal party that is determined to dismantle the social state and benefits in order to create a Hobbesian nightmare for the vast majority of the working population.

In short, there will be no substantial change in the basic campaign strategy that was resoundingly rejected by an angry electorate.

The elements of that programme leaked after the 29 May party meeting were little more than platitudinous pious wishes – stimulating growth by stressing production and innovation, job creation, bolstering salaries and labour relations,  strengthening the social state, and fortifying democratic institutions.

Back to the grass roots, mobilising cadres

Amidst a prevailing sense even within its ranks that SYRIZA has lost touch with society, SYRIZA reportedly plans to hold a series of open assemblies around country.

With some in the party attributing its defeat in some measure to the fact that Tsipras ran the campaign single-handedly, it was decided that top cadres will attempt to mobilise voters all around Greece “to decisively enter the battle for the country’s future”.

That may well be designed to in some measure temper the anger against Tsipras and diffuse responsibility in the event that SYRIZA takes an even harsher beating in the July 7 parliamentary election.

Denial, running on the record

Though New Democracy’s nearly ten percentage point lead in the 26 May European Parliament election makes a SYRIZA victory in the general election well nigh impossible – some project that the spread may even grow – the PM and party brass in an apparent effort to rally the troops are arguing that it is possible to turn the tide.

The government’s narrative in the campaign will be based on the argument that SYRIZA managed to lead the country out of the bailout memorandum era and that the benefits of that development have not yet sunk in.

That is linked to the contention that SYRIZA’s programme will benefit the many whereas New Democracy will follow unpopular neo-liberal policies that will offer tax breaks for the businesses while keeping personal income taxes high and ignoring the plight of the poor.

The problem with that line of reasoning is that a majority of voters appears to be convinced that the ruling party overtaxed and decimated the middle class in favour of the lowest economic strata.

While middle class voters who backed SYRIZA in 2015 may have thought that they would benefit from the party’s promises of distributive justice as it would (as it said) make the wealthy pay their share of the burden of the crisis, they quickly found that instead it overtaxed the middle class and small-to-medium sized businesses to support those near or under the poverty line, without sustainable relief even for them.

While party officials have speculated that the magnitude of the defeat was due to the fact that a substantial chunk of SYRIZA’s 2015 voters failed to come out and vote, it will be extremely difficult to rally together in one month a fractured base comprised largely of undecided voters whose trust in the party has been shaken by the electoral knock-out it suffered in the recent European Parliament election.

For many, however, the effort to create a new narrative and disseminate it within a month - so as to stem a mass defection from a party widely expected to be annihilated in a New Democracy landslide - is simply unfeasible.

Naturally, the overarching concern within SYRIZA is that even the best communication strategy will be dismissed by voters as too little too late.

TANEA Team 30 Μαΐου 2019 | 19:14
Share
Δείτε επίσης
Περισσότερα άρθρα για Αγγλική έκδοση
Greece’s role as an energy hub must be emphasised Editorial: Opportunities
Mitsotakis-Biden talks: Greek-Turkish relations, the war in Ukraine, wayward Turkey’s new role in NATO
It is not in Greece’s interest for Turkey to be isolated or humiliated Editorial: Opportunity
The Marshall Plan prioritised rebuilding export capacity How should a Marshall Plan for Ukraine work?
Drop in COVID-19 deaths - number of infections, intubated patients stable, hospital admissions rise
Policing of universities is an unpleasant but necessary measure Editorial: No excuse
A strict price inspections policy is needed to curb untrammelled price hikes Editorial: Dealing with inflation
Editorial: Axes
Ta Nea has repeatedly called for decisive action Editorial: University police force plan on the back burner
Everything depends on how the social media are used Editorial: Words
SYRIZA’s gains in 2012 were a Pyrrhic victory. Editorial: Populism
There will be a 600 euro cap on the rebate Amidst uproar over skyrocketing energy costs, Mitsotakis announces rebates for households
This is the 12th anniversary of the deadly arson attack Editorial: Radio silence
Many cases involving extremely serious crimes have not been tried Editorial: A bitter political legacy
EODY has recorded a total of 3.34mn COVID-19 infections EODY: 32 COVID-related deaths, over 8,000 infections, 660 reinfections, 231 intubated patients