The new environment will leave no room for revolutionary exercises fueled by blind coercion but instead will create a new relationship between the citizenry and the state, based on an agreed upon security framework. 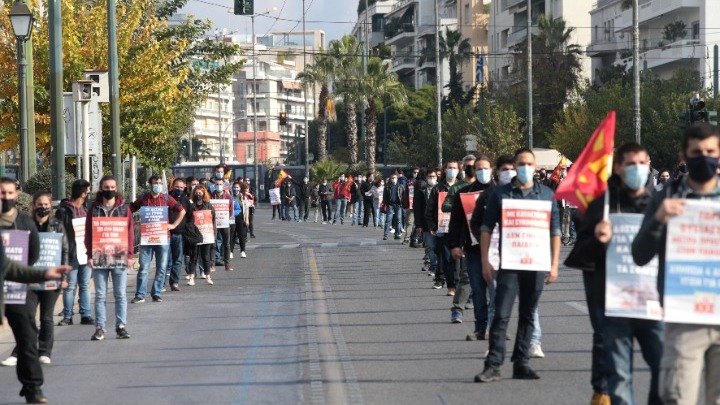 A report in Ta Nea today details the government's plan for regulating protest demonstrations during the COVID-19 epidemic.

It involves a flexible new framework based on abiding by and guarding the rules of public health.

The law is the law and no violation can be legitimised in a time of pandemic.

The plan was preceded by the establishment of a modern nexus of laws that adhere to the demands of new conditions and needs.

The new game plan for security forces as regards public assembly takes into account two new realities. The aim is to combine maximum effectiveness in policing resulting in a minimum number of clashes.

The core objevctive of the plan is to deepen the enforcement of the law while limiting deviant acting out.

The new environment will leave no room for revolutionary exercises fueled by blind coercion but instead will create a new relationship between the citizenry and the state, based on an agreed upon security framework of law enforcement in a difficult period

Ideally this new relastionship will provide fertile ground for regaining people's trust and expanding and deepening faith in institutions and the well-defined rules of our democracy.

In this new decade states will achieve progress when they are fortified, contemporary, and citizen-friendly and operate under a guaranteed framework.

TANEA Team 7 Ιανουαρίου 2021 | 21:05
Share
Δείτε επίσης
Περισσότερα άρθρα για Αγγλική έκδοση
Mario Draghi has a prominent position in the EU architecture Editorial: Alliance
After a certain point, the necessary caution is a matter of personal responsibility Editorial: COVID-19 and personal responsibility
Extremists still constitute a threat Editorial: Threat
A consciously responsible stance is needed Editorial: Maintaining COVID-19 alertness
The late PM Constantine Karamanlis famously said, 'We belong to the West' Editorial: Contradictions
The end of EU enhanced fiscal supervision signals the exit from the tunnel Editorial: Breakthroughs
Head of Greek Pomaks’ Association rips into Erdogan’s revisionist expansionism
All Greek governments since Andreas Papandreou's demanded the return of the Marbles Osborne: ‘Deal to be done’ on sharing Parthenon Marbles
All efforts toward a radical resolution of the refugee problem have failed Editorial: The end does not justify the means
France's centrist forces are rallying behind President Emmanuel Macron Editorial: The political centre
The Germans are returning, this time not to impose their will but to cooperate Editorial: Greece as a bridge between Western Balkans, EU
The demographic crisis must be managed swiftly Editorial: Demographic crisis
There was a Jewish presence in Thessaloniki even in antiquity, and the Apostle Paul preached in its synagogue Leon Saltiel: Glimmers of hope in battling Greek antisemitism
Investment will also play a pivotal role Editorial: The dynamic of the Greek economy
Universities will be given more control over their affairs Editorial: Reforms must be implemented swiftly