At a time when Europe is being racked by a pandemic and multi-nationals are announcing the suspension of part of their activity it cannot afford to leave millions of workers to their own devices. 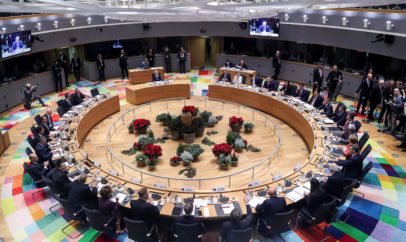 The government has announced a stimulus package that ranges from support for labour and business to measures affecting the real estate market - including a 40 percent rent cut for businesses that were ordered to suspend activity.

It called on Greek banks to take similar action because if an economy is brought to its knees it is difficult to recover, especially after a decade-long crisis and with the deep wounds of bankruptcy still fresh.

This time of course the problem is not exclusively Greek or a matter concerning the weak links of the European south.

It is a problem that concerns all of Europe which has been forced to close its borders and freeze a wide spectrum of economic activity.

At a time when Europe is being racked by a pandemic and multi-nationals are announcing the suspension of part of their activity it cannot afford to leave millions of workers to their own devices.

Just as any other crisis this pandemic is multi-faceted and may produce collateral damage at a variety of levels.

The virus does not threaten only public health and the governments of EU member-states are well aware of that.

Yet they appear timid and reluctant to transcend their national borders in order to take collective action to benefit all European citizens.

One hopes that at least this time the collateral damage caused by this pandemic will not include European solidarity and cohesion.

Περισσότερα άρθρα για Αγγλική έκδοση
The worst-case scenario of a complete cut-off of Russian gas should be put on the table Editorial: Vigilance in handling energy crisis
If the Church does not intervene immediately, the state must Editorial: Cracking down on a priest’s quackery
Erdogan attempted to depict Greece as a rogue state Editorial: Composure in dealing with Turkey
Turkey is conducting a hybrid war that has a distinct communications component Op-ed: A turning point in Turkey’s strategy
Meloni cannot afford to pick a fight with the EU Editorial: Vigilance in safeguarding liberal democracy
In the World Economic Forum Global Gender Gap Index, Iran ranks 140th out of 144 Editorial: Turning point for Iranian women
Athens must mobilise immediately, utilising its alliances, partners Editorial: Greece’s diplomatic marathon
All the figures indicate that Greece had an exceptional tourist season Editorial: A serious approach to the tourism sector
The future of the British monarchy is not considered as certain as before Editorial: Changes
Graduates of Greek medical schools do not choose to specialise in anaesthesiology Editorial: Health ministry persuasion campaign needed
Tsipras has long been cautiously courting Androulakis Tsipras says he wants to avoid second election with coalition based on ‘progressive’ programme
Vladimir Putin would very much like to secure China’s support Editorial: Geopolitical fronts and poles
The government has devised a plan and has taken certain initiatives Editorial: A mature response to the demographic problem
If elections were to be held sooner, the harm may perhaps have been tempered Editorial: Everything must come to light
Once again, Ankara is playing precarious games Editorial: A coordinated, EU-wide response to Turkey