Irresponsible leaders and the timidity and reluctance of other major economies such as China's to cooperate in order to reverse climate change leave little room for optimism. 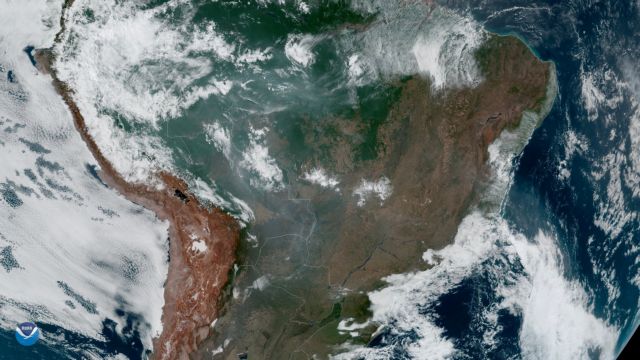 The fire that is destroying the Amazon rainforest, the greatest forest on earth, does not remind us only of how small our planet is.

It also reminds us of the decisive role that the political choices of a single person can play.The president of Brazil emasculated the environment ministry by removing its authority.

As a result, wilfires increased by 83% as compared to last year in the Amazon.

The repercussions of this disaster will soon be apparent across the planet.

The presidents of Brazil and the US, the most powerful country in the world, deny the existence of climate change, despite the fact that 95% of scientists underline that there is no doubt that humans have brought about climate change.

These irresponsible leaders and the timidity and reluctance of other major economies such as China's to cooperate in order to reverse climate change leave little room for optimism.

Those who are responsible for our fate turn a blind eye and even display contempt for the ever greater, dramatic warnings of the scientific community.

They turn away from the catatrophe in the Amazon, or perhaps simply see opportunities for economic profit.

One thing is clear by now.

The planet can survive without humans, but humans cannot live without their planet.

TANEA Team 23 Αυγούστου 2019 | 16:10
Share
Δείτε επίσης
Περισσότερα άρθρα για Αγγλική έκδοση
Mario Draghi has a prominent position in the EU architecture Editorial: Alliance
After a certain point, the necessary caution is a matter of personal responsibility Editorial: COVID-19 and personal responsibility
Extremists still constitute a threat Editorial: Threat
A consciously responsible stance is needed Editorial: Maintaining COVID-19 alertness
The late PM Constantine Karamanlis famously said, 'We belong to the West' Editorial: Contradictions
The end of EU enhanced fiscal supervision signals the exit from the tunnel Editorial: Breakthroughs
Head of Greek Pomaks’ Association rips into Erdogan’s revisionist expansionism
All Greek governments since Andreas Papandreou's demanded the return of the Marbles Osborne: ‘Deal to be done’ on sharing Parthenon Marbles
All efforts toward a radical resolution of the refugee problem have failed Editorial: The end does not justify the means
France's centrist forces are rallying behind President Emmanuel Macron Editorial: The political centre
The Germans are returning, this time not to impose their will but to cooperate Editorial: Greece as a bridge between Western Balkans, EU
The demographic crisis must be managed swiftly Editorial: Demographic crisis
There was a Jewish presence in Thessaloniki even in antiquity, and the Apostle Paul preached in its synagogue Leon Saltiel: Glimmers of hope in battling Greek antisemitism
Investment will also play a pivotal role Editorial: The dynamic of the Greek economy
Universities will be given more control over their affairs Editorial: Reforms must be implemented swiftly