The PM engaged in petty partisan bargaining with his former coalition partner in the hope of ensuring his own interests. 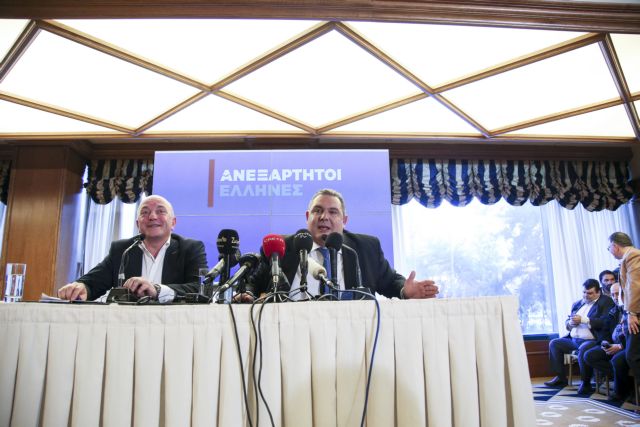 The outgoing defence minister, Panos Kammenos, reminded us of how unfit he was for the office that the prime minister had entrusted to him.

He burdened the Greek people with a cost of thousands of euros so that he could take a miltary helicopter to fly over the Aegean in a final attempt to exploi their sense of patriotism, to throw a wreath into the sea to honour the three officers who died during the 1996 Imia crisis when their helicopter crashed in the Aegean.

Fortunately, the Greek people no longer have to pay for the ex-minister’s show trips. However, they will continue to be ruled by a government that sacrifices the political stability that the country sorely needs in order to stay in power. at all costs.

One will have an unstable government that will rely on scattered MPs to maintain its parliamentary majority.

Can a country truly be governed in such a manner? The obvious answer is no. If the prime minister is so interested in ratifying the Greece-FYROM Prespa Agreement, the honourable stance would be to seek the support of the parties that are in favour of the accord and to call elections immediately.

Instead, he decided to stay in power a bit longer by relying on a motley majority.

The prime minister did not place the interests of the country first. He engaged in petty partisan bargaining with his former coalition partner in the hope of ensuring his own interests.

Things cannot go onlike this for very long. The countdown for the government has already begun.
Even belatedly, the prime minister should place the interests of the country first.

Αγωνία για το φθινόπωρο και το «ντέρμπι» με την οικονομία
TANEA Team 14 Ιανουαρίου 2019 | 14:01
Share
Δείτε επίσης
Περισσότερα άρθρα για Αγγλική έκδοση
Olympiacos FC statement
Greece’s success in securing its interests at the EU summit shows the way Editorial: Opportunity
Ever since Syriza lost the July, 2019, elections it has appeared unable to adjust to its new role as main opposition party Editorial: Shoestrings
Why Russia? The answer is quite simple for those in the know  Hagia Sophia, Turkey, Russia and the West
Lights of hope: From Olympiacos Piraeus to the World
To continue to confront the coronavirus successfully one needs a combination of state care and individual responsibility Editorial: Time
Britain’s Ocado sees retail sales soar 27% in lockdown half
Blinded by power the Syriza-Independent Greeks thought they could rule without constitutional checks Editorial: Paying the piper