Editorial: Throwing in the towel

Yesterday it became clear that the prime minister has definitively lost the ability to call the shots with inititiatives on the political stage. 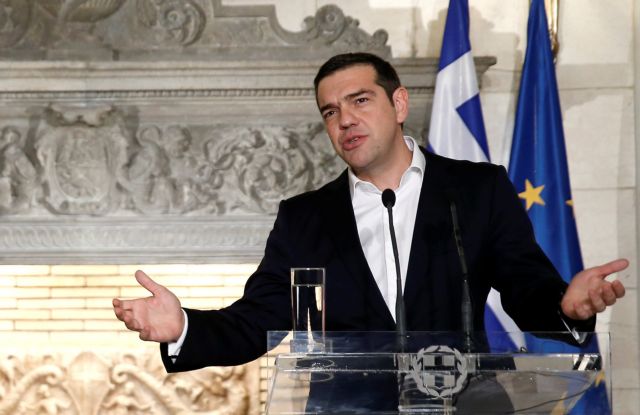 In his interview with Open television yesterday, Prime Minister Alexis Tsipras admitted for the first time what everyone else has been saying – that the government’s problem is political and not only a matter of numbers.

Of course, the PM expressed the conviction that his junior coalition partner, Defence Minister Panos Kammenos, will continue to support the government in parliament.

What is important, however, is not that supposed certainty, but rather what the PM said he would do if his partner withdraws his support, which is to call elections if he loses his pariamentary majority.

Yesterday it became clear that the prime minister has definitively lost the ability to call the shots with inititiatives on the political stage.

Essentially, he admitted that he is in an exceptionally difficult position, and yesterday it became clear that the prime minister has definitively lost the ability to call the shots with inititiatives on the political stage.

It would be a grave error if he were to attempt to extend his stay in power by bending to the dictates of his partner or by seeking the scatterred votes of MPs in order to maintain his parliamentary majority. By doing so, the PM would transform the arithmetic and political problem into an institutional one.

The leader of the SYRIZA-Independent Greeks government yesterday threw in the towel.

Having for the first time acknowledged the political nature of the problem with which the government is confronted, he now has a duty to put in motion the procedures that will transcend the apparent impasse.

In democracies, after all, the citizens have the last word.

Επίθεση με βιτριόλι: Μία «ανάσα» πριν τη μαυροφορεμένη οι αρχές – Νέες αποκαλύψεις
TANEA Team 10 Ιανουαρίου 2019 | 21:06
Share
Δείτε επίσης
Περισσότερα άρθρα για Αγγλική έκδοση
Editorial: Roles
Editorial: Opposition
French crisis measures have cost 450 bln euros, finance minister says
Euro zone bond yields steady; focus remains on recovery fund
Until when does Mr. Melissanidis think that he can set the ‘rules of the game’?
Greek A-team in the coronavirus battle: Mount Sinai's Antonis Charokopos
Editorial: Challenges
Ta Nea today presents the Athens Municipality plan which is daring but must also be functional Editorial: The Greek capital
Editorial: Recognition
Editorial: A lesson of life
An economic restart is inconceivable with a drop in the employment rate Editorial: Tools
Over 250,000 jobs are expected to be lost Editorial: Standing
It means mutual respect and trust between state, citizens Editorial: A new social contract
The NHS was and in many way remains the sick man of the Greek state Editorial: Pride and joy
Ambassador Op-Ed for Ta Nea The U.S. and Greece: Partners in the Pandemic and the Day After