The problem is the PM's untrammeled pledges of handouts, the en masse civil service hiring, and the salary hikes for those affiliated with the ruling party. 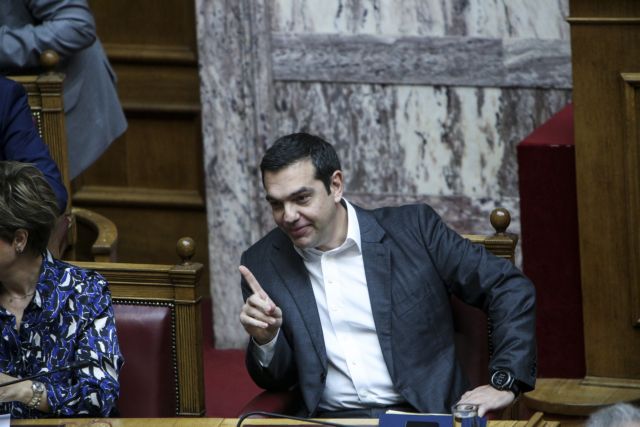 With his statement in parliament yesterday – “For us, the first hundred days are ending tomorrow, with the passing of 100 days since the country exited the bailout memorandum.” – the prime minister attempted to restart from scratch.

He attempted to write off his almost four-year record as prime minister, as if he were not personally responsible for the heavy austerity that he enforced, resulting in the “super-primary surplus” (the portion that exceeds targets) of which he boasts.

The prime minister’s efforts to find a narrative that will sway voters are understandable. The problem with the narrative of the leader of the SYRIZA-Independent Greeks coalition government is not that it appears false. It is the untrammeled pledges of handouts, the en masse civil service hiring, and the salary hikes for those affiliated with the ruling party. These actions bear witness to the fact that with an irresponsible leadership the country can return to the canards that led to bankruptcy.

This policy is anything but pro-working class.  As was recently proven in a harsh manner, although the prime minister wants to forget it, the first victims of a crisis are the have nots.

Moreover, the PM forgets that the country still has a serious debt problem.

TANEA Team 29 Νοεμβρίου 2018 | 19:11
Share
Δείτε επίσης
Περισσότερα άρθρα για Αγγλική έκδοση
Greece’s role as an energy hub must be emphasised Editorial: Opportunities
Mitsotakis-Biden talks: Greek-Turkish relations, the war in Ukraine, wayward Turkey’s new role in NATO
It is not in Greece’s interest for Turkey to be isolated or humiliated Editorial: Opportunity
The Marshall Plan prioritised rebuilding export capacity How should a Marshall Plan for Ukraine work?
Drop in COVID-19 deaths - number of infections, intubated patients stable, hospital admissions rise
Policing of universities is an unpleasant but necessary measure Editorial: No excuse
A strict price inspections policy is needed to curb untrammelled price hikes Editorial: Dealing with inflation
Editorial: Axes
Ta Nea has repeatedly called for decisive action Editorial: University police force plan on the back burner
Everything depends on how the social media are used Editorial: Words
SYRIZA’s gains in 2012 were a Pyrrhic victory. Editorial: Populism
There will be a 600 euro cap on the rebate Amidst uproar over skyrocketing energy costs, Mitsotakis announces rebates for households
This is the 12th anniversary of the deadly arson attack Editorial: Radio silence
Many cases involving extremely serious crimes have not been tried Editorial: A bitter political legacy
EODY has recorded a total of 3.34mn COVID-19 infections EODY: 32 COVID-related deaths, over 8,000 infections, 660 reinfections, 231 intubated patients