The Greek people do not deserve a state that is at the mercy of violence, and that allows a sense of insecurity to prevail on the street, fear at universities, and abandonment in the health system. 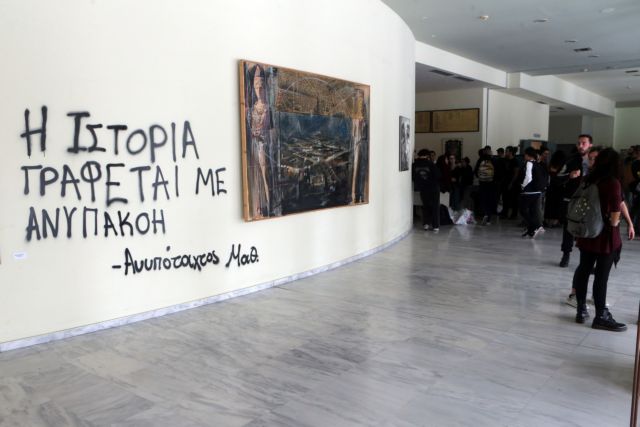 The forays into public buildings as isolated incidents may not shock, but it is useful to look at the overall picture in ministers’ offices – first the labour minister’s and then repeatedly the education minister’s – which have been violently occupied.

At universities, academic asylum is viewed as a hiding place and not as a guarantee of the free exchange of ideas. At hospitals, cots and shortages of supplies test the endurance of patients and their families. Policemen, when they are not forced to present their IDs to various anarchists, are beaten mercilessly.

It is as if this government, due to its ideological fixations, disregards the fact that universities exist to transmit knowledge, hospitals to offer health services, and the police to protect society from violence and lawlessness, and not to fall victims to violence itself.

The government tolerates violence even in the offices of ministers and courtrooms, because it believes it is thus ensuring tolerance toward itself. Of course, it is labouring under an illusion, but society cannot continually pay for the illusions of a government.

TANEA Team 13 Νοεμβρίου 2018 | 13:47
Share
Δείτε επίσης
Περισσότερα άρθρα για Αγγλική έκδοση
Editorial: Audits of politicians' wealth
Mario Draghi has a prominent position in the EU architecture Editorial: Alliance
After a certain point, the necessary caution is a matter of personal responsibility Editorial: COVID-19 and personal responsibility
Extremists still constitute a threat Editorial: Threat
A consciously responsible stance is needed Editorial: Maintaining COVID-19 alertness
The late PM Constantine Karamanlis famously said, 'We belong to the West' Editorial: Contradictions
The end of EU enhanced fiscal supervision signals the exit from the tunnel Editorial: Breakthroughs
Head of Greek Pomaks’ Association rips into Erdogan’s revisionist expansionism
All Greek governments since Andreas Papandreou's demanded the return of the Marbles Osborne: ‘Deal to be done’ on sharing Parthenon Marbles
All efforts toward a radical resolution of the refugee problem have failed Editorial: The end does not justify the means
France's centrist forces are rallying behind President Emmanuel Macron Editorial: The political centre
The Germans are returning, this time not to impose their will but to cooperate Editorial: Greece as a bridge between Western Balkans, EU
The demographic crisis must be managed swiftly Editorial: Demographic crisis
There was a Jewish presence in Thessaloniki even in antiquity, and the Apostle Paul preached in its synagogue Leon Saltiel: Glimmers of hope in battling Greek antisemitism
Investment will also play a pivotal role Editorial: The dynamic of the Greek economy