FYROM naming accord referendum too close to call

In response to the question “Do you favour the agreement with Greece on changing the name of the Republic of Macedonia, 52.6 percent of respondents said no, and 47.4 percent said yes. 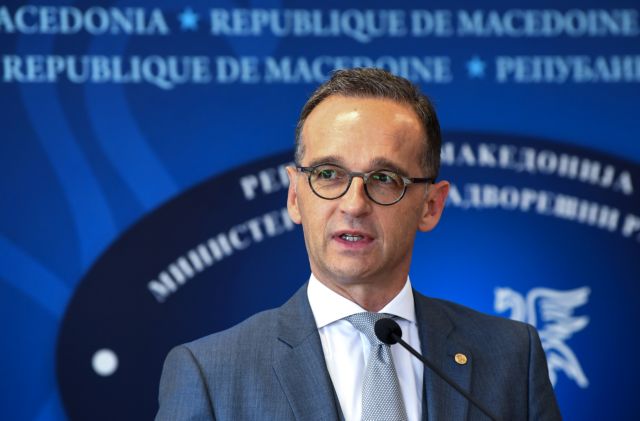 Just two weeks ahead of FYROM’s crucial referendum on the naming agreement with Greece, campaigning for a ‘Yes’ vote by the government and top-level Western officials who are visiting Skopje has reached a fevered pitch.

Even US Defense Secretary Jim Mattis visited Skopje to provide impetus for a positive result, underlining the advantages of the agreement for FYROM and the broader Balkan region.

Both the US and the EU are fervently supporting the agreement, and have adopted the line of PM Zoran Zaev, that it is now or never.

Even so, the referendum will hardly be a cakewalk for Zaev.

German Foreign Minister Heiko Maas (photo above) today began a tour of Southeastern Europe in Skopje, and will end it in Athens. Such visits underline the enormous importance that the West attaches to the outcome of the referendum, most immediately because it is the precondition for FYROM to be admitted to Nato and to begin accession talks with the EU.

Mattis went as far as to openly accuse Russia of attempting to intervene in the referendum with a disinformation campaign. Moscow staunchly opposes FYROM’s Nato membership.

Zaev distanced himself from Mattis’ allegations in an effort to defuse the domestic and geopolitical tensions. “I have no proof off Russian intervention. The Russian Federation is a friend of Macedonia, and has nothing against its EU accession, but it is against our participation in Nato, and it says so clearly. We are trying to explain that for us, there is no alternative to full membership in the EU and Nato. We want to build friendly relations with all countries, including the Russian Federation, and I think our Russian friends will understand that our citizens will remain dedicated to that orientation,” Zaev said.

‘Yes’ vote on a razor edge

FYROM’s citizens still appear to be skeptical regarding approval of the agreement, and that is turning the outcome of the referendum into a thriller.

According to an opinion survey published by the website mkd.mk, when asked “Are you in favour of admission to Nato and the EU, by accepting the Greece-FYROM agreement?” 51.1 percent responded yes and 48.9 percent said no.
As regards the ethnic breakdown of the vote, 33.5 percent of Slavo-Macedonians said yes to the agreement, and 66.5 percent said no.

On the other hand, 95 percent of ethnic Albanians responded that they favour admission to Nato and the EU through acceptance of the accord, and only five percent said no.

In response to the question “Do you favour the agreement with Greece on changing the name of the Republic of Macedonia, 52.6 percent of respondents said no, and 47.4 percent said yes.

In a report on the referendum, Politico’s opined that a complex and largely unknown geopolitical setting is emerging in the Balkans, and that China’s ambition to create a Silk Road toward Europe will play a dominant role.

The article underlines that it is not only Russia that is opposed to the West on the issue, as there is a new player at the table.

Noting Russia’s role in the Balkans, Politico said that Brussels wants to transform FYROM into a regular country, and that for its part Russia has a substantial interest in the referendum, as the result will determine Skopje’s path toward the EU and Nato.

TANEA Team 18 Σεπτεμβρίου 2018 | 18:25
Share
Δείτε επίσης
Περισσότερα άρθρα για Αγγλική έκδοση
Editorial: Audits of politicians' wealth
Mario Draghi has a prominent position in the EU architecture Editorial: Alliance
After a certain point, the necessary caution is a matter of personal responsibility Editorial: COVID-19 and personal responsibility
Extremists still constitute a threat Editorial: Threat
A consciously responsible stance is needed Editorial: Maintaining COVID-19 alertness
The late PM Constantine Karamanlis famously said, 'We belong to the West' Editorial: Contradictions
The end of EU enhanced fiscal supervision signals the exit from the tunnel Editorial: Breakthroughs
Head of Greek Pomaks’ Association rips into Erdogan’s revisionist expansionism
All Greek governments since Andreas Papandreou's demanded the return of the Marbles Osborne: ‘Deal to be done’ on sharing Parthenon Marbles
All efforts toward a radical resolution of the refugee problem have failed Editorial: The end does not justify the means
France's centrist forces are rallying behind President Emmanuel Macron Editorial: The political centre
The Germans are returning, this time not to impose their will but to cooperate Editorial: Greece as a bridge between Western Balkans, EU
The demographic crisis must be managed swiftly Editorial: Demographic crisis
There was a Jewish presence in Thessaloniki even in antiquity, and the Apostle Paul preached in its synagogue Leon Saltiel: Glimmers of hope in battling Greek antisemitism
Investment will also play a pivotal role Editorial: The dynamic of the Greek economy