The keynote speaker, renowned composer Mikis Theodorakis, 92, delivered a fiery speech to declare that Macedonia was and remains Greek, and to deliver withering criticism of the left-wing government, which he denounced as national nihilists. 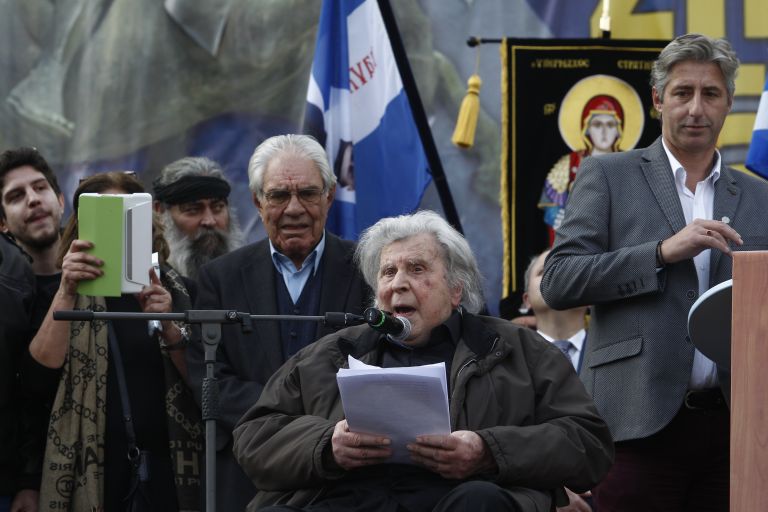 People of all ages from all corners of the country flooded Athens’ central Syntagma Square in a huge rally to protest the prospect of Greece accepting the use of the name Macedonia by Skopje.

Greek police put the number of protesters at 140,000, while organisers spoke of 1.5 million people, almost all with small Greek flags in hand.

The keynote speaker, renowned composer Mikis Theodorakis, 92, delivered a fiery speech to declare that Macedonia was and remains Greek, and to deliver withering criticism of the left-wing government, which he denounced as national nihilists.

“My friends, I dedicate my speech to the Greeks who freed us from the Ottoman yoke and which brought Theodoros Kolokotronis (the War of Independence hero) on 4 February, 1843. I am not ashamed, like the national nihilists who are governing us, to remain faithful to the sacred shadows of our ancestors, who taught us to love the fatherland and the nation. A nation that respects and loves all nations of the world,” Theodorakis declared.

“I am an internationalist patriot, and I fight at the same time all manner of fascism, and above all the left-leaning variety, which is the most dangerous,” said the composer, who is also revered for his resistance during the Nazi occupation and during the Greek colonels’ junta, between 1967-1974.

“With Macedonia as the ramrod, the Skopjans are skewing in a ridiculous manner the historical facts, in order to create the so-called Macedonia of the Aegean,” said Theodorakis, referring to traditional irredentist claims of Skopje to Greek Macedonia, which is about 50 percent of the territory of the geographic region that bears that name, a part of which is in Bulgaria.

“We will not allow them to take Macedonia away from us. I am from Larissa. So let us give them Thessaly and the rest of the country too,” said one protester named Dimitris.

“We set out at dawn from Thessaloniki to attend the rally, to shout out loud that our Macedonia is Greek, the entire family together, with our grandchildren, so they too may learn that Macedonia is not up for sale,” said a woman named Litsa, with her four-year-old grandchild.

The massive demonstration, the second such after the huge rally in Thessaloniki, comes amidst feverish talks between Athens and Skopje on the naming issue and on eradicating irredentist elements from FYROM’s Constitution, school books and maps.

The Greek government has said clearly that if all other issues are resolved in a mutually acceptable manner, it will approve a compound name, including the name Macedonia with a geographic or temporal marker.

“They must understand that we, the Greek people, have the power in our hands. There is one Macedonia and it is Greek. Enough of letting them all these years expropriate our history,” said a protester named Thanasis from Patras.
The Orthodox Church of Greece also expressed objections to the use of the name Macedonia by FYROM, in a message from the Holy Synod read by Metropolitan bishop Dorotheos of Syros.

“The Church of Greece, which diachronically stands by the nation, supports every effort to defend to defend Macedonia, as long as it is genuine, not self-interested, and far from partisan motives. It respects the separation of Church and State, but also the anxiety of laity and clergy. For this reason it cannot accept use of the name Macedonia or any derivative thereof, as a constitutive element of the name of another state,” Dorotheos said, asserting that the use of the name by Skopje has irredentist motives.

TANEA Team 4 Φεβρουαρίου 2018 | 20:09
Share
Περισσότερα άρθρα για Αγγλική έκδοση
Both SYRIZA and PASOK are in a transitional phase Editorial: Changes
Tsipras posts on the social media and frequently as possible Editorial: Obligations
Universities have become a sort of state within the state Editorial: Enough is enough!
Nobody for whatever reason has the right to beat a professor Editorial: Zero tolerance
The shift in America’s priorities should come as no surprise Editorial: Fluidity
We have the weapons, the experience, and obviously the collective will Editorial: Transcending the pandemic
How do you negotiate with Vladimir Putin? Editorial: Dilemma
Editorial: Phenomenon
Maintaining tensions does not contribute to dialogue or good neighbourly relations Editorial: Pragmatism in Greek-Turkish relations
The alarm bell of daily life is urgently ringing Editorial: Alarm bell
We believe that the projections of scientists are exaggerated. They are not. Editorial: Living dangerously
It is up to us to exit the pandemic on our feet Editorial: Caution
The cost of a total lockdown would be very high for the economy Editorial: The need for personal responsibility, again
Banks – They secure short-term loans to provide new ones
Price increases in energy threaten the viability of businesses