The two leaders presented the agreements as a substantial step toward the much touted EU defence autonomy and ended a joint press conference at Elysee Palace with beaming smiles and raised clasped hands. 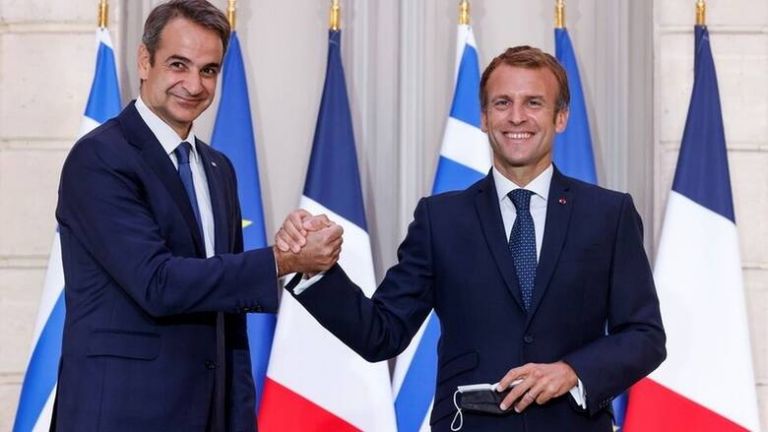 French President Emmanuel Macron and Prime Minister Kyriakos Mitsotakis this morning announced an historic mutual assistance defence pact and the signing of a deal for Greece to buy Belharra frigates, which will substantially upgrade the force of the Hellenic Navy.

The two leaders presented the agreements as a substantial step toward the much-touted EU defence autonomy and ended a joint press conference at Elysee Palace with beaming smiles and raised clasped hands, signaling the importance of the deals for both sides.

“This is a very important moment. We are at the apex of our cooperation," Macron declared, noting that France played a strategic role in averting a military clash in the Eastern Mediterranean in the summer of 2020.

“This cooperation expresses our will to bolster our defence cooperation and the security of our countries and our common regions,” he said.

“We intensified these discussions over the last week. We want to protect the territorial integrity of both of our countries, promoting security, stability, and prosperity in our regions.”

Macron said that the agreements signal and confirm the deepening of Greece-France cooperation, the strategic stakes on the level of foreign policy, and the military part specifically, as well the area of the arms industry. This is underlined by Greece’s procurement of three Belharra frigates that were constructed in France.
‘

'Vote of confidence in Greece-France relations’

Macron described the bilateral agreements as a vote of confidence in Greece-France relations and said that cooperation on the industrial level will intensify.

He said that both sides will have a maximum benefit and that new jobs will be created. “This agreement is part of a mutual plan for (meeting) our commitments at the level of the EU and NATO.”

Security, peace in the Mediterranean

“We will benefit from security, peace in the Mediterranean, the Middle East, and Africa, but also in the Balkans,” he said, noting that the agreements contribute to cooperation on the EU level.
“We have a common vision for the entire region that entails our interests and stability and acting and working in tandem.”

“Greece had a civilisation before it became a nation. It inspired us and allowed us to be the world that we are…Greece is a country that in the span of two centuries managed to follow an unspeakable path, that of independence and of being a state in the heart of Europe.”

“This cooperation is in line with our history,” he said.

The new bilateral strategic cooperation is based on two pillars, a defence cooperation and the purchase of French Belharra frigates.

The mutual assistance defence pact satisfies an objective that Greece has pursued for over four decades, solidarity from its fellow EU member states in the event of an attack by Turkey. The agreement reportedly entails assistance even if the threat comes from a third party (such as Turkey) that participates in international organisations, such as NATO, of which the two countries are members.

“As Europeans, it is our duty to show solidarity with members states. It is legitimate that we commit to equipping it so it can ensure its territorial integrity is respected and that we commit to cooperating to protect it in case of intrusions, attacks or aggressions,” said Macron.

The second pillar is a deal for Greece’s purchase of French Belharra frigates that will greatly bolster the Hellenic Navy, which was signed by Greek Defence Minister Nikos Panagiotopoulos and his French counterpart, Florence Parly.

TANEA Team 28 Σεπτεμβρίου 2021 | 12:51
Share
Δείτε επίσης
Περισσότερα άρθρα για Αγγλική έκδοση
Editorial: Opportunity
Angela Merkel – In Athens on October 28 and 29
If the pandemic is checked, we can hope for much better days Editorial: Turning point for Europe
Record-breaking over-subscription for CPLP bond issue
We have a duty to ensure for families a network of protection in our schools. Editorial: Maintaining balances
We have the power to leave behind this unprecedented crisis. Editorial: Exiting the pandemic
Mitsotakis – Sisi meeting – Emphasis on energy and defense
What Seismologist Lekkas says Strong earthquake 6.1 Richter off Karpathos
Editorial: Attention must be paid
The European Union’s internal market had completely eliminated internal borders Op-ed: Fortress Europe?
The letter stresses US support for Athens’ dialogue with its neighbours Blinken underlines US ‘respect for sovereignty and territorial integrity’ in letter to Mitsotakis
The strategic dialogue was launched in Washington in December, 2018 US-Greece strategic dialogue covers all levels of bilateral, regional, international cooperation
The main duty of the state is to protect the lives and property of citizens Editorial: Prevention
Cyprus to brief permanent members of UN Security Council on Turkey's moves to re-open Varosha
She is a bright example of a politician who fearlessly and boldly is confronting her new challenge Editorial: Fofi, stand strong!