'I returned it [Hagia Sophia] to those who are its owners since the time of Mehmed the Conqueror...Either I will take Byzantium or Byzantium will take me,' Erdogan declared. 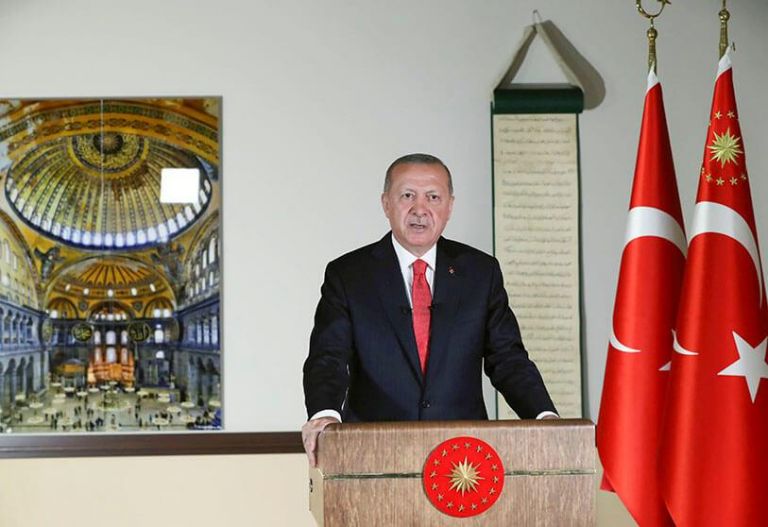 When in July, 2020 Turkish President Recep Tayyip Erdogan turned the Hagia Sofia Museum into to a mosque, he sparked an international outcry.

Over a year later, addressing members of his AKP party in Rize, Erdogan accused the opposition of trying to keep Hagia Sophia closed.

“I returned it (Hagia Sophia) to those who are its owners since the time of Mehmed the Conqueror,” he declared. “We determined our path well. Our path is not the same as theirs (the opposition). Either I will take Byzantium or Byzantium will take me. This pact is our and not theirs.”

‘Solomon, I have defeated (outdone) you’

Completed in 537 during the reign of the Emperor Justinian I, Hagia Sophia was the Royal Basilica and the Cathedral of the Archbishop of Constantinople and Ecumenical Patriarch for nearly 1,000 years.

“Solomon, I have defeated (outdone) you” the emperor is said to have cried out after its completion, referring to King Solomon’s Temple.

Hagia Sophia’s splendid mosaics are considered to be among the greatest works of Byzantine art. Turkish authorities covered with long strips of cloth the large mosaic of the Virgin Mary with Christ (called the Platytera) that towers above the apse of the cathedral, after it was turned into a mosque.

In 1935, the founder of the Republic of Turkey, Kemal Ataturk, who had undertaken the gargantuan task of creating a secular Turkey, ordered that the then mosque become a museum.

The largest and most splendid church in Christendom for over 1,000 years, the cathedral – known to the Eastern Orthodox as the Great Church of Christ - is universally acknowledged as an architectural marvel, in large because of its enormous dome, an amazing architectural feat at the time, and has for decades been a UNESCO World Heritage site.

Pope Francis on 12 July, 2020, had expressed his deep dismay over Erdogan’s decision.

"My thoughts go to Istanbul. I think of Santa Sophia and I am very pained," he declared, speaking at a service in the Vatican.

When the transformation of Hagia Sophia into a mosque went forward in July, 2020, UNESCO released a detailed statement and condemned the move.

“The Director-General of UNESCO deeply regrets the decision of the Turkish authorities, made without prior discussion, to change the status of Hagia Sophia. This evening, she shared her serious concerns with the Ambassador of Turkey to UNESCO.

Hagia Sophia is part of the Historic Areas of Istanbul, a property inscribed on UNESCO’s World Heritage List. “Hagia Sophia is an architectural masterpiece and a unique testimony to interactions between Europe and Asia over the centuries. Its status as a museum reflects the universal nature of its heritage, and makes it a powerful symbol for dialogue,” said Director-General Audrey Azoulay.

This decision announced today raises the issue of the impact of this change of status on the property’s universal value. States have an obligation to ensure that modifications do not affect the Outstanding Universal Value of inscribed sites on their territories. UNESCO must be given prior notice of any such modifications, which, if necessary, are then examined by the World Heritage Committee.

UNESCO also recalls that the effective, inclusive and equitable participation of communities and other stakeholders concerned by the property is necessary to preserve this heritage and highlight its uniqueness and significance. The purpose of this requirement is to protect and transmit the Outstanding Universal Value of heritage, and it is inherent to the spirit of the World Heritage Convention.

These concerns were shared with the Republic of Turkey in several letters, and again yesterday evening with the representative of the Turkish Delegation to UNESCO. It is regrettable that the Turkish decision was made without any form of dialogue or prior notice. UNESCO calls upon the Turkish authorities to initiate dialogue without delay, in order to prevent any detrimental effect on the universal value of this exceptional heritage, the state of conservation of which will be examined by the World Heritage Committee at its next session.

It is important to avoid any implementing measure, without prior discussion with UNESCO, that would affect physical access to the site, the structure of the buildings, the site’s moveable property, or the site’s management,” stressed Ernesto Ottone, UNESCO’s Assistant Director-General for Culture. Such measures could constitute breaches of the rules derived from the 1972 World Heritage Convention.”

Shortly before Hagia Sophia’s inauguration as a mosque, then Secretary of State Mike Pompeo had admonished Ankara not to go ahead with the move.

The then Secretary of State’s full statement:

“The Government of Turkey has administered the Hagia Sophia as a museum – officially recognized by UNESCO as part of the Historic Areas of Istanbul World Heritage Site – in an outstanding manner for nearly a century. We urge the Government of Turkey to continue to maintain the Hagia Sophia as a museum, as an exemplar of its commitment to respect the faith traditions and diverse history that contributed to the Republic of Turkey, and to ensure it remains accessible to all.

This extraordinary site is a testament to religious expression and to artistic and technical genius, reflected in its rich and complex 1,500-year history. Moreover, the site’s status as a museum has allowed people from all over the world to access and reflect upon this magnificent achievement.

The United States views a change in the status of the Hagia Sophia as diminishing the legacy of this remarkable building and its unsurpassed ability—so rare in the modern world—to serve humanity as a much-needed bridge between those of differing faith traditions and cultures. We seek to continue to work with the Government of Turkey on a broad range of issues of mutual interest, including the preservation of religious and cultural sites.”

Condemnation from the EU

EU foreign policy chief Josep Borrell at the time had lamented Erdogan’s decision and stated that the Union’s 27-member Council of Foreign Ministers "condemned the decision to convert such an emblematic monument as the Hagia Sophia."

"This decision will inevitably fuel mistrust, promote renewed division between religious communities and undermine our efforts at dialogue and cooperation," Borrell said after the 13 July, 2020, foreign minister’s meeting, noting that there was "broad support to call on the Turkish authorities to urgently consider and reverse this decision."

TANEA Team 6 Σεπτεμβρίου 2021 | 18:47
Share
Δείτε επίσης
Περισσότερα άρθρα για Αγγλική έκδοση
The country is in great need of stability., not electoral surprises Editorial: Normalcy
The EU’s adjustment of financial rules has facilitated the situation Editorial: Lessons
Editorial: The conundrum of early elections
It is common knowledge that all political parties seek the vote of Greece’s youth Editorial: Greece’s youth
In a democracy, elections cannot serve as a weapon for prime ministers Editorial: The need for electoral stability
Mitsotakis rules out any prospect of political consensus with SYRIZA
Merkel’s statement should lead us collectively to a rethinking of what happened and not reflexive indignation Editorial: The price of imprudent politics
Self-tests, contact tracing key to safe re-opening of schools Spike in COVID-19 cases expected after schools open next week
The repercussions of these illegal actions are not limited to public health Editorial: A threat to society
September has arrived, but the University Protection Groups did not keep the rendezvous Editorial: Rendezvous
Theodorakis exemplified the sacred and mystical marriage of music and poetry The Greek nation bids farewell to beloved composer Mikis Theodorakis
One must be very careful in making choices that will influence the education of future generations Editorial: The time has come for a bold ‘yes’
Hellenic Statistical Service Staikouras for GDP – Strong recovery confirmed
Destroying a minority: Turkey's September 6-7, 1955 pogrom against the Greeks of Istanbul
The issue of food price hikes is decisive for maintaining social cohesion and social peace Editorial: Antidotes