The Cycladic island, which has become famous for its seas, is always an ideal destination for a few days of vacation. 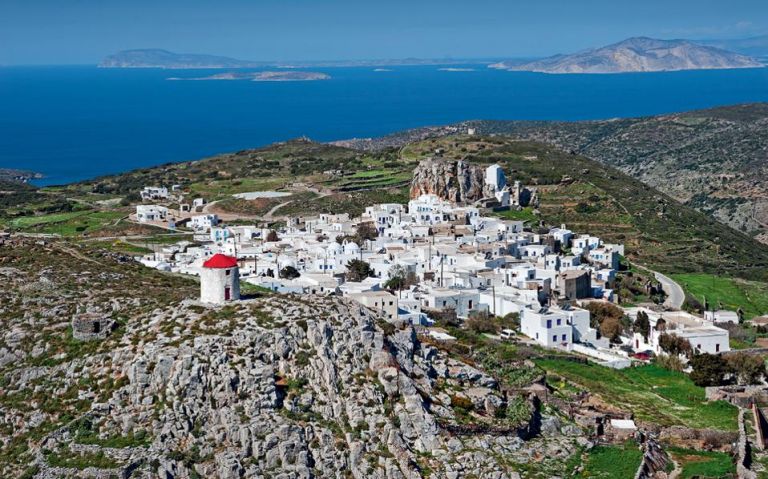 “I only know how much I loved you” writes Nikos Gatsos in “Amorgos”. And the unique (but great) collection of poetry of the important lyricist may not refer exclusively to the island, whose name is used almost accidentally, symbolically, but abundantly embraces Greece. It encloses a place full of memories, beauty, and transcendental images. After all, isn’t the real Amorgos, which was loved so much by those who visited it, something like that? Amorgos, that became the set for famous movies? How did it gain international fame for the deep blue color of its sea? Which is projected in the Aegean, among the other islands, as “a kiss of the sea of ​​aphrodisiac”, to refer again to the lyrics of Gatsos.

Seventh in size among the Cyclades, Amorgos of 121,464 square kilometers and 1,973 inhabitants (according to the 2011 census) is a narrow strip of land with a mountainous morphology, lying on the sea. It has been inhabited since antiquity, in fact it was an important center of Cycladic culture. Its name is said to have come from the endemic plant amorgis or linocam (a type of flax), from which the ancient inhabitants made yarn and then made their own clothes. The island has two natural ports, Katapola and Aegiali. And above Katapola, at an altitude of about 350 meters, is Chora, a picturesque, whitish settlement with a special charm.

Built around the 13th century by the Venetians, at a high point to avoid raids by Saracen pirates roaming the Aegean, Amorgos Town (Chora) is a set of whitewashed houses and narrow alleys with geraniums and bougainvilleas, which create a small labyrinth. It has two squares, Kato Loza (where the metropolis of Amorgos is located) and Apano Loza. It has many small churches (like almost all the settlements of the Aegean) and has its castle, fortified by the Venetian brothers Jeremiah and Andrea Gizi. The castle offers a wonderful view from up there. An important attraction of Chora is of course the remaining old windmills, which also offer a wonderful panorama. You will see exhibits on the rich history of the place in the Archaeological Museum, which is housed in the Gavras Tower, a historic building of the 18th century. Lagada, Tholaria, and Arkesini (where there are the ruins of ancient Arkesini) are three picturesque villages worth visiting.

The journey of an icon

We do not think that the monastery of Panagia Hozoviotissa needs special recommendations, as it is the most photographed and the most famous attraction of the island: Built on the steep, south coast in 813 AD, on the vertical rock, it was renovated in 1088 AD by the Byzantine emperor Alexios I Komnenos. It is multi-storey and its architecture is extremely interesting. According to tradition, its name owes it to the origin of the icon of the Virgin kept there from Hozovo or Hoziva or Koziva of the Holy Land. Which image was transferred to the island during the years of the Iconoclasm to be saved – according to tradition, it was thrown into the sea so that it would not fall into the hands of unbelievers and it “traveled” to the beach of Agia Anna. The monastery celebrates on November 21, the day of the Assumption of the Virgin. The visitor can get there following a path from Chora (the journey takes about half an hour) or he can go by car and then go up the 300 cobbled steps that will lead him to the entrance. And from Panagia Hozoviotissa the view is spectacular!

One of the most unexpected attractions of Amorgos is the wreck of the ship “Olympia”. Its rusty hull, stranded since February 1980 in a bay in the west of the island, poses for visitors, adding something melancholy to the landscape. Although such maudlin, feelings, specially during the summer months, have no place on an island as open-hearted as Amorgos. Why does the sun shine, why does nature musk beautifully and why does the sea, crystal clear and transparent, invite you to dive and wash off every fatigue, every unpleasant thought. It is this unique sea that inspired Luc Besson’s 1988 “Infinite Blue”, the film that was shot (and) on the island and that made Amorgos known to the whole world. So if you want to enjoy this endless and so detoxifying blue, all you have to do is drive to Agia Anna, which is the most famous beach on the island. You will reach Mouros following a path. Aegiali (next to the homonymous settlement), Agios Pavlos, Maltezi (access on foot and by boat), Paradisia, Kalotaritissa, Mikri Vlychada are also beautiful beaches. The neighboring islands of Gramvousa and Nikouria are two more ideal options for swimming. Amorgos is, among other things, a favorite destination for hikers, as it has marked and well-maintained trails. As for your stay there, you can find rooms for all tastes and all budgets, from the simplest to the most elegant rooms and suites of the five-star “Aegialis” with a wonderful view to the beach of Aegiali. The hotel also provides spa services, as there is a thalassotherapy and beauty center on site. “Vigla Hotel”, “Yperia Hotel” and “Skopelitis Village” are some other worthwhile options. You will reach the island by boat from Piraeus. The journey takes from six and a half (by speedboat) to eight and a half – nine hours (by conventional ferry).

TANEA Team 28 Ιουνίου 2021 | 12:14
Share
Περισσότερα άρθρα για Αγγλική έκδοση
Editorial: The 'most complex' Games
Editorial: Proud
The first Mercure in Greece, opens its doors in Rhodes
Greek-Italian “tourism conflict”
In Turkish-occupied Cyprus, Erdogan unleashed an attack against Prime Minister Kyriakos Mitsotakis Editorial: Erdogan's provocations
'Kosova wants to build on the historic ties between our peoples ' Kosovo PM Albin Kurti: 'We would welcome a decision by Greece to recognise Kosovo’s independence'
Demonstrating the conspiracy against Stavros Papastavrou
Citizens will be encouraged to buy new, climate-friendly cars Editorial: Green
Mitsotakis: Vaccinations are increasing in recent weeks – What Breton told him
One must take into account that we have strong allies on the other side of the Atlantic Editorial: Fronts
The shooting of the international television production “My Greek Odyssey” on Ios
Alexandroupolis as ‘new Souda’: US, Greece near agreement on bases – what the US wants, what Athens seeks
A political understanding and consensus are needed in order to speed up the vaccine rollout Editorial: The urgent need for political consensus on vaccines, managing pandemic
Turkey's provocations concern not only Cyprus but the entire EU Editorial: Drawing boundaries
If we have one ally to come out of the tunnel and into the light, it is vaccination Editorial: Light