The veracity of the allegations against the erstwhile strong man of the first left-wing government, Nikos Pappas, and against the then ruling party, must be investigated. 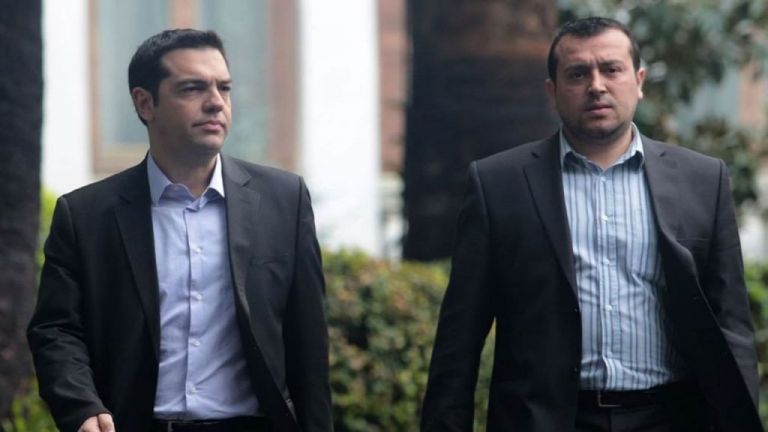 The preliminary parliamentary probe of former state minister Nikos Pappas’ (Syriza, photo with ex-PM Alexis Tsipras) role in a tender for broadcast television licenses has already been delayed given the initial timetable.

The committee has not yet managed to question the basic witness in depth.

A series of postponements has already harmed the exceedingly important process of parliamentary review and have given the impression that the can is being kicked down the road as regards the probe of weighty accusations.

One got the same sense from yesterday’s hearing of the parliamentary special committee. Yet, most all observers agree that its members are obliged to fully and thoroughly shed light on the case and to get to the bottom of it as soon as possible because that is what the national interest mandates.

The veracity of the allegations against the erstwhile strong man of the first left-wing government and, by extension, against the then ruling party, must be investigated because they concern issues related to the core of the democratic form of government.

If a Greek government indeed ruled with the objective of acquiring something like absolute power by controlling the state at all levels - instead of with the aim of serving all citizens regardless of what party they voted for - then MPs on the committee have a duty to inform the public and offer evidence.

The purpose and significance of the committee greatly transcends the clashes of the country’s two largest parties.

It concerns how institutions were exploited during Syriza’s rule, between 2015 and 2019.

It is crucial that one not forget this.

TANEA Team 18 Μαΐου 2021 | 16:20
Share
Δείτε επίσης
Περισσότερα άρθρα για Αγγλική έκδοση
There is a danger of the war being viewed as something normal Editorial: Taking measures
Athens' objective was to avert concessions that might affect Greek interests Greece, Turkey declare their satisfaction with results of NATO summit
What is at stake is the strategic depth of the Alliance Editorial: A crucial NATO summit
European supervised drug consumption sites have been an inextricable part of drug treatment Editorial: The first step
The overturning of Roe v. Wade turns the clock back 50 years for American women. Editorial: Back and forth
Thymios' statement - “I no longer trust people.” – is a punch in the gut. Editorial: A punch in the gut
Editorial: Audits of politicians' wealth
Mario Draghi has a prominent position in the EU architecture Editorial: Alliance
After a certain point, the necessary caution is a matter of personal responsibility Editorial: COVID-19 and personal responsibility
Extremists still constitute a threat Editorial: Threat
A consciously responsible stance is needed Editorial: Maintaining COVID-19 alertness
The late PM Constantine Karamanlis famously said, 'We belong to the West' Editorial: Contradictions
The end of EU enhanced fiscal supervision signals the exit from the tunnel Editorial: Breakthroughs
Head of Greek Pomaks’ Association rips into Erdogan’s revisionist expansionism
All Greek governments since Andreas Papandreou's demanded the return of the Marbles Osborne: ‘Deal to be done’ on sharing Parthenon Marbles