As he explained, the signs of recovery appear first in the economy and then get reflected in shipping rebounding 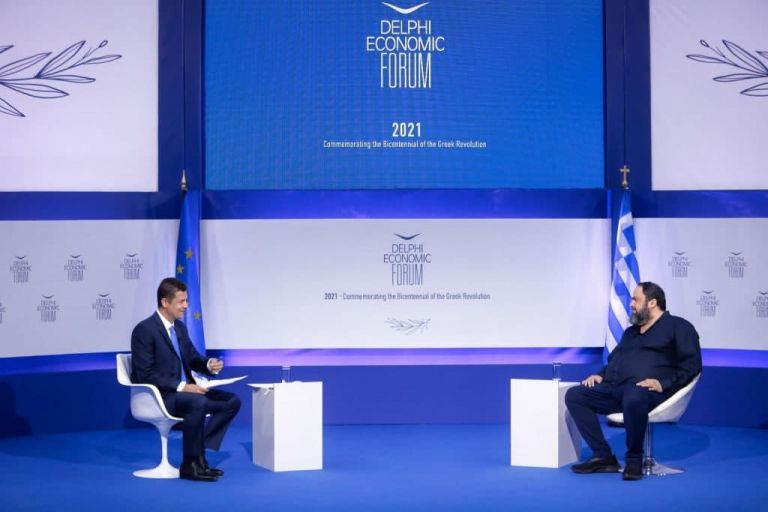 During the 6th Delphi Economic Forum, Greek shipowner Evangelos Marinakis, Founder and Chairman of Capital Maritime & Trading Corp., discussed major issues affecting shipping today, such as the repercussions from the ongoing pandemic, “eco-ship” investments and “green energy” as well as the social contribution of shipping.

During an interview with Greek journalist Antonis Sroiter, Mr. Marinakis commented on the impact of the pandemic: “it was something unprecedented, something which affected many shipping sectors, such as tankers and LNG carriers, even dry bulk carriers. “We observed many ups and downs in the market, especially the tanker market remains still at very low levels, because transportation and travel have been significantly reduced and fuel consumption isn’t what it used to be before Covid-19” he said.

Conversely, Mr. Marinakis pointed out that the freight rates for container vessels have been on the rise for the past six months, reaching record levels, something he attributed to a change in consumers’ habits. “People aren’t going on vacations, they’re not going out to entertain themselves, therefore, they’re consuming various goods from their homes, which they hadn’t thought about consuming in the past. As a result, there is great demand for these goods, which is reflected in their increased transportation,” he said, adding:

As he explained, the signs of recovery appear first in the economy and then get reflected in shipping rebounding. Conversely, when there is a crisis in the economy, it affects shipping adversely after some time, be it six months or a year and more.

Mr. Marinakis also discussed the current crew crisis and stressed that “the first thing that we tried to safeguard was the repatriation of seafarers. Something very difficult, as, in spite of the existing agreements, a lot of our crews remained onboard for much longer than agreed. What “should be done, he said, is that all seafarers get vaccinated, either at their country before boarding a vessel or at subsequent port of call”. Our country also, he said, should proceed to vaccinate Greek seafarers in May with the opening of the cruise ship season and with ferryboats carrying travelers and holiday-makers to the Greek islands.

He also remarked that Capital has been active in remote vessel inspections and remote learning since a long time ago, after taking delivery of a large number of newbuilding vessels, of the highest technical specifications. Speeding up these processes was a good repercussion of the pandemic, as it improves vessel safety and the safe transportation of goods. He also stressed “the importance of these new vessels fulfilling the necessary requirements for higher efficiency and the lowest CO2 footprint in the atmosphere”.

Capital’s Chairman, talking about the environment said that while shipping carries up to 90% of global trade, it is “responsible for only 2.5% of emissions worldwide”.   However, the International Maritime Organisation (IMO) guidelines to reduce shipping industry emissions until 2050 mean that shipowners must “pay the bill” for new vessels and engines”. I believe, he continued, that this legislation should extend also to the industries that produce the machines needed to meet these guidelines and should not apply to ships only. “They should take on the part that corresponds to them”, as he said characteristically. Also, they should be told that “from now on, they can produce only this type of machines”. He called for subsidies towards the industries that will build state-of-the-art and low-emission engines for vessels in order to keep prices at reasonable levels, “just the way it is being done with cars.”

Along those lines, he repeated his forecast that major changes are in store in the shipping industry from the development of more eco-friendly fuels, pointing to an “environmental shift” in the sector that is also related to the new Biden administration’s much more favorable approach towards “green” energy and the environment — compared to the previous U.S. administration. Mr. Marinakis expects the shift in favor of the environment to be larger and to come earlier, which is good for the environment”.

To the question whether the development of other forms of energy e.g. solar energy, hydrogen, etc. means the end of the transportation of crude oil, the president of Capital estimated that, since in the future, the main fuel will not be oil but other forms of energy, there will definitely be other types of ships transporting other goods, but not oil. “So the future is not in tankers. “We are not only positioned in tankers and LNG but also in dry cargo ships and containerships where we invest even more” he mentioned.

Asked about his recent high-profile investment in Athens-based Terna Energy, a domestic leader in alternative forms of energy production, Marinakis said profit was not the only factor in the decision, as a need for greater environmental protection was also factored in.

“We made a very big investment in Terna Energy, because we see from our business and from charterers that there is this big shift in green investments and it is right to invest not only for profit but also for the environment” he said.

Moreover, he didn’t rule out more “green” investments. “When you’re in the shipping business you’re obliged to record not only a reduction in your carbon emissions ‘footprint’ but to take other action for the environment. So, our decision to make a major investment in Terna Energy was based on this good combination.”

He also stressed the importance of such “green investments” for investors of US-listed shipping companies, in which he holds interests, as environmental criteria apply in all areas of financing. From 2007 they maintain a very good relationship with investors. As he states “it is remarkable that in these years we faced very big crises and that is where you can see the difference: how you can navigate, as we say in shipping, how you can master the ship, when there are big storms. We make the difference during difficult times and it is something that gives us not only strength but also courage to continue in the years to come”.

Finally, he referred to the significant support for Greek society of the Greek shipping community, noting that “Greek shipowners have provided support, but do not want their names to be heard. I think this is right. “To make as little noise as possible.” Through the Union of Greek Shipowners and its social responsibility branch, SYN-ENOSIS, many Greek shipowners have helped Greece. The president of the Union, Mr. Veniamis, has done a lot to help whenever there was need, collecting large sums from Greek shipowners. “Through the Union and SYN-ENOSIS but also here in Piraeus, where we are located, we have offered a lot to the whole country, but I am not happy to say that. “People know it and we will continue to give as long as we have our health and ability.”

TANEA Team 11 Μαΐου 2021 | 16:40
Share
Δείτε επίσης
Περισσότερα άρθρα για Αγγλική έκδοση
A businessman has the right to bar entry to his or her establishment of unvaccinated people Editorial: Reaching an understanding
Editorial: Privileges
The NATO Summit is bound to be newsworthy as it is Biden’s first Editorial: Lines
The government must ensure that the path toward modernisation will begin. Editorial: Changes
Covid free Kythnos island – 100% of the population vaccinated
Tourism minister in the Netherlands
There are strikes, like the one at the port, held just for the sake of declaring them Editorial: Conceptions
Ideally, we should fashion a new social and economic model for Greece Editorial: Model
The government must urgently undertake necessary initiatives to root out organised crime Editorial: Root out organised crime
COVID-19 vaccines and immunity: We are not among the lucky ones
Our era requires balances, seriousness, planning, and of course to defend one’s red lines Editorial: A coordinated foreign policy
The Turkish Foreign Minister confirms that the big goal is to convene a Mitsotakis – Erdogan meeting Exclusive Interview TO VIMA – Mevlut Cavusoglu: The “keys” for a solution
Fear could lead to slowing down the pace of appointments in the vaccine rollout Editorial: Choices
In our age, references to international law seem cliché or even something of a joke Editorial: Red lines of democracy
The UGS’s position on the recent statements made by Mr. Panos Laskaridis