Trump and Biden engage in first of three debates 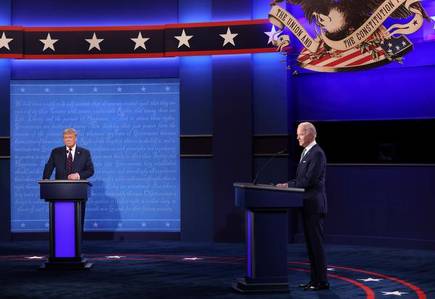 In a chaotic first debate marked by repeated interruptions by Trump, Biden said the president was more concerned with the economy and stock market than he was with blunting the spread of the coronavirus.

«He panicked or he looked at the stock market,» Biden said of Trump, who has pushed for states to reopen their economies and played down the threat of the pandemic.

«You’re the worst president America has ever had,» Biden said, urging him to get off the golf course and get to work.

Trump defended his approach on the pandemic, which has killed more than 200,000 people in the United States and put millions of Americans out of work.

«We’ve done a great job,» Trump said. «But I tell you, Joe, you could never have done the job we’ve done. You don’t have it in your blood.»

With more than a million Americans already casting early ballots and time running out to change minds or influence the small sliver of undecided voters, the stakes were enormous as the two White House candidates took the stage five weeks before the Nov. 3 Election Day.

The two contenders did not shake hands as they entered the debate, adhering to protocols on social distancing because of the coronavirus.

Biden, 77, has held a consistent lead over Trump, 74, in national opinion polls, although surveys in the battleground states that will decide the election show a closer contest.

The 90-minute debate, with a limited and socially distanced in-person audience because of the pandemic, was held at Case Western Reserve University in Cleveland, with Chris Wallace of Fox News serving as the moderator. It was the first of three scheduled presidential debates and one vice presidential debate.

Trump defended his effort to swiftly fill a U.S. Supreme Court seat, saying «elections have consequences» and he had the right despite Democratic objections.

«I will tell you very simply we won the election, elections have consequences. We have the Senate and we have the White House and we have a phenomenal nominee respected by all,» Trump said in defense of his nominee, conservative Judge Amy Coney Barrett.

Biden, talking over frequent interruptions from Trump, said the seat of the late Ruth Bader Ginsburg should be filled after the Nov. 3 election, when it was clear who the president would be.

«We should wait, we should wait and see what the outcome of this election is,» Biden said, adding a more conservative Supreme Court would endanger the Affordable Care Act known as Obamacare.

Trump is moving quickly to fill Ginsburg’s seat in hopes of cementing a 6-3 conservative majority on the court, a key priority for social conservatives.

Democrats have argued Republicans are being hypocritical for moving quickly to fill the seat given they had blocked then-President Barack Obama’s nomination to the Supreme Court in 2016, arguing it should wait until after that November election.

Trump repeatedly interrupted Biden as he attempted to answer questions, prompting Biden at one point to interject: «Will you shut up, man?»

The combustible Trump and more low-key Biden were debating an array of urgent political challenges, including the pandemic that has killed more than 200,000 people in the United States and thrown millions out of work, protests for racial justice, as well as the battle over the Supreme Court.

Hours before the debate, Biden released his 2019 tax returns and his campaign called on Trump, who has come under fire for not releasing his returns, to do the same.

Biden took the step two days after the New York Times reported Trump paid just $750 in federal income taxes in 2016 and 2017 – and none in 10 of the previous 15 years – following years of reporting steep losses from business enterprises.

Biden’s taxes showed that he and his wife Jill paid more than $346,000 in federal taxes and other payments for 2019 on an income of nearly $985,000 before seeking a refund of nearly $47,000 they said they had overpaid the government.

TANEA Team 30 Σεπτεμβρίου 2020 | 10:09
Share
Περισσότερα άρθρα για Αγγλική έκδοση
At Greek universities progress is battling regression. Editorial: Two worlds
Editorial: Opportunity
Angela Merkel – In Athens on October 28 and 29
If the pandemic is checked, we can hope for much better days Editorial: Turning point for Europe
Record-breaking over-subscription for CPLP bond issue
We have a duty to ensure for families a network of protection in our schools. Editorial: Maintaining balances
We have the power to leave behind this unprecedented crisis. Editorial: Exiting the pandemic
Mitsotakis – Sisi meeting – Emphasis on energy and defense
What Seismologist Lekkas says Strong earthquake 6.1 Richter off Karpathos
Editorial: Attention must be paid
The European Union’s internal market had completely eliminated internal borders Op-ed: Fortress Europe?
The letter stresses US support for Athens’ dialogue with its neighbours Blinken underlines US ‘respect for sovereignty and territorial integrity’ in letter to Mitsotakis
The strategic dialogue was launched in Washington in December, 2018 US-Greece strategic dialogue covers all levels of bilateral, regional, international cooperation
The main duty of the state is to protect the lives and property of citizens Editorial: Prevention
Cyprus to brief permanent members of UN Security Council on Turkey's moves to re-open Varosha