One can safely assume that the climate in the days before, during, and after the commemoration of the 8 December killing of teenager Alexandros will be extremely tense. 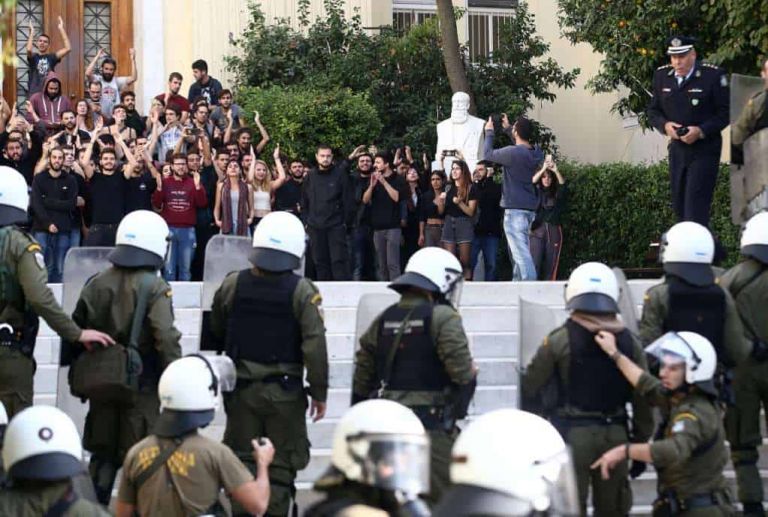 One need not have been a soothsayer to predict that the decision of the government for law and order to prevail in the centre of Athens in general and more specifically at universities would result in a reaction from those who swear by disorder and lawlessness.

The incidents of violence and threats demonstrates that these groups are in a state of turmoil and one of them went as far to utter the words casus belli (cause for war).

What triggered these threats was a 15-day deadline announced by the Ministry of Citizen’s Protection for those who are illegally occupying buildings in the Exarcheia neighbourhood of Athens to get out.

Clearly, with this decision the government placed the bar very high. The deadline coincides with the shooting death of teenager of Alexander Grigoropoulos by a policeman named Korkoneas.

One can safely assume that the climate in the days before, during, and after the commemoration of the killing will be extremely tense.

Consequently, the government must have a specific plan to confront those who seek to disrupt the peaceful life of the capital hoping for yet another explosion of violence.

The effectiveness with which those entrusted with maintaining order operated on the 17 November anniversary of the Athens Polytechnic uprising offers no guarantees for the future and there is no room for complacency, which is impermissible.

From that perspective the government bears a dual responsibility. On the one hand it must prove that the state cannot be threatened or blackmailed. On the other hand, it must demonstrate that police are the first to serve as a model of legality.

That means that when state organs are confronted with bellicose groups and individuals, the response cannot be arbitrary police action.

Εντείνεται η ανησυχία για τον κοροναϊό : Αυξάνονται συνεχώς οι νεκροί στην Κίνα – Νέο κρούσμα στην Αυστραλία
TANEA Team 24 Νοεμβρίου 2019 | 20:41
Δείτε επίσης
Περισσότερα άρθρα για Αγγλική έκδοση
The president-elect of Greece has won people over even before assuming office Editorial: Modesty
Marinakis just dealt the final blow to the so-called ‘clean-up’ of Greek Football in front of UEFA/FIFA
The dialogue Marinakis to Grammenos: «You have been doing anything that Savvidis was telling you for such a long time and now you’ve become sensitive?»
President-elect Ekaterini Sakellaropoulou symbolises Greece’s passage to a new era with greater consensus and less toxicity Editorial: A victory for democracy
'Our country is governed by the rule of law and is a force of stability, growth, and culture' President-elect Sakellaropoulou to focus on defending rights, sovereignty
Turkey’s provocations are non-stop Editorial: Audacity
Hospitals should not be excluded from public-private partnerships Editorial: Partnerships
The government in Tripoli has said that Greece 'has nothing substantial to offer'. Haftar in Athens, Greece to veto EU approval of Libya peace deal if MOU with Turkey not canceled
The nominee has the prestige and wherewithal to serve the office in a worthy manner Editorial: Consensus
The last president who was not a politician was Christos Sartzetakis who served between 1985-1990 In historic move, Mitsotakis taps Council of State chief to serve as first woman president
Realism at all levels and in every way must be the only guide Editorial: Realism
Greece cannot be punished ad infinitum for the errors of the past Lower primary surplus targets key to Greek economic growth
Indian slaves swap life of bondage for seat in boardroom at tea plantation
Editorial NEA: Puzzle
EU resumes probe into Boeing-Embraer deal, sets new April 30 deadline