Andreas Papandreou is not remembered for crafting post-dictatorship politics, but rather because of the democratic achievements that it entailed, which were hardly a given at that time. 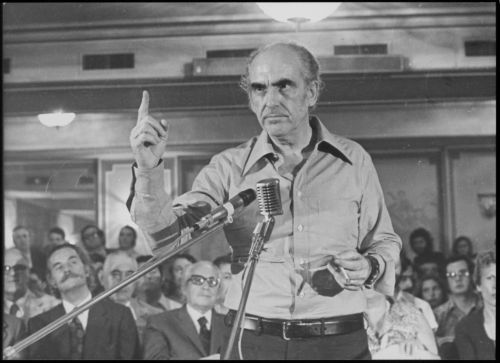 Andreas Papandreou, the 100th anniversary of whose birth is today, was a personality that left an indelible imprint on the history of Greece.

He did this in many ways. He did it as a prime minister who governed the country for over a decade. He did it as a visionary politician who attempted to secure for the country a distinctive place on the global map. He also did it as a democrat who with his personal passion gave another dimension to the clash between conservatism and progressivism.

Undoubtedly, Andreas Papandreou made mistakes. Yet, no one can deny that his overall record was positive. Andreas Papandreou is not remembered for crafting post-dictatorship politics, but rather because of the democratic achievements that it entailed, which were hardly a given at that time. He is also credited with definitively healing the wounds of the Civil War by recognising the National Resistance and ending the division of the people into first-class and second-class citizens.

Social mobility, the reduction of inequalities, the lifting of exclusions, and the end of the police state are all achievements for which one must credit Andreas Papandreou.

One must also recognise that he united Greece’s progressive forces at a time when they were seeking a common political shelter.

All of this constitutes a legacy that his contemporary successors should not cede to anyone.

TANEA Team 5 Φεβρουαρίου 2019 | 13:53
Share
Δείτε επίσης
Περισσότερα άρθρα για Αγγλική έκδοση
Santander Consumer Finance begins activities in Greece
Evangelos Marinakis: Post-Covid Shipping and the Environment – Green Energy Investments
The US ambassador says Biden has “opened up a new vocabulary of cooperation” with Greece Pyatt see deeper US-Greece strategic ties under Biden administration
The case will be re-tried in the framework now set by the Council of State Bombshell Council of State ruling accepts state’s vaccine side-effect liability
May Day should be honoured with a single march each year Editorial: Unity
Transcending the collective crisis will require leadership and not troublemakers Editorial: Messages
After a six-month shutdown, workers in the restaurant business laid the tables Editorial: The first step
The government has repeatedly said that the existing framework is outdated Battle royal looms over government bill overhauling labour relations, limiting strike action
The labour trade union movement is an invaluable and irreplaceable weapon of workers An urgent need for the rebirth of the trade union movement
Editorial: The pendulum of American politics
The thirty-somethings rushed to be vaccinated for the sake of their families and their friends Editorial: Front-and-centre
The parliamentary vote on approval of the plan’s implementation is expected before Easter Editorial: Liquidity
Turkey is keenly aware of the fact that there is a new player on the geopolitical chessboard Editorial: A just act
Biden takes historic step to recognise Armenian Genocide
National COVID-19 Committee spokesman explain public health decisions, planning for future