This chasm between the country’s name on the one hand and its ethnicity and language on the other leaves a bitter taste for almost all Greek citizens, as was evidenced in the recent rallies and opinion polls. 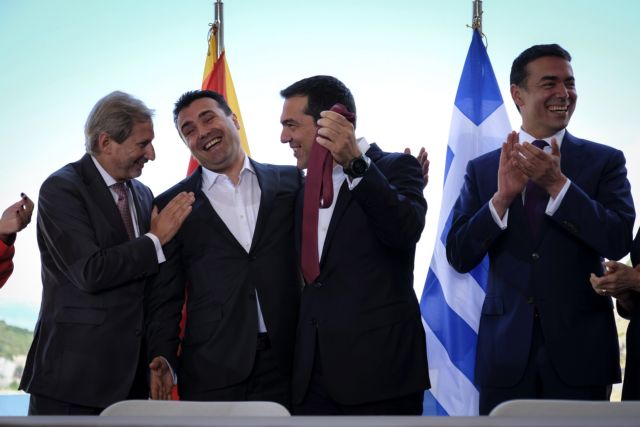 The government declares that it is proud of the Prespa Agreement under the terms of which the Former Yugoslav Republic of Macedonia (FYROM, as it was known in international organisations since the 1995 Greece-FYROM Interim Agreement) was recognised as Republic of North Macedonia

That is the government’s right. It should not, however, feel at all proud about the way it handled a national issue that arouses sensitivities in the vast majority of Greek citizens. It ought to have solicited the counsel of former foreign ministers who had negotiated the naming issue with Skopje. Instead, it acted covertly.

This chasm between the country’s name on the one hand and its ethnicity and language on the other leaves a bitter taste for almost all Greek citizens, as was evidenced in the recent rallies and opinion polls.

How the government will manage that chasm from now on is critical. Will it continue to divide the country into two camps and to brand and send all of its critics to the far right camp, or will it attempt to unite the country?

It will divide if it again uses a national issue for partisan gain. It will unite if it realises that the day after the Prespa Agreement confronts Greek citizens with a painful reality.

The government’s choice will determine if it will tread the path of petty partisan irresponsibility or that of serving the national interest.

TANEA Team 27 Ιανουαρίου 2019 | 03:31
Share
Δείτε επίσης
Περισσότερα άρθρα για Αγγλική έκδοση
Mario Draghi has a prominent position in the EU architecture Editorial: Alliance
After a certain point, the necessary caution is a matter of personal responsibility Editorial: COVID-19 and personal responsibility
Extremists still constitute a threat Editorial: Threat
A consciously responsible stance is needed Editorial: Maintaining COVID-19 alertness
The late PM Constantine Karamanlis famously said, 'We belong to the West' Editorial: Contradictions
The end of EU enhanced fiscal supervision signals the exit from the tunnel Editorial: Breakthroughs
Head of Greek Pomaks’ Association rips into Erdogan’s revisionist expansionism
All Greek governments since Andreas Papandreou's demanded the return of the Marbles Osborne: ‘Deal to be done’ on sharing Parthenon Marbles
All efforts toward a radical resolution of the refugee problem have failed Editorial: The end does not justify the means
France's centrist forces are rallying behind President Emmanuel Macron Editorial: The political centre
The Germans are returning, this time not to impose their will but to cooperate Editorial: Greece as a bridge between Western Balkans, EU
The demographic crisis must be managed swiftly Editorial: Demographic crisis
There was a Jewish presence in Thessaloniki even in antiquity, and the Apostle Paul preached in its synagogue Leon Saltiel: Glimmers of hope in battling Greek antisemitism
Investment will also play a pivotal role Editorial: The dynamic of the Greek economy
Universities will be given more control over their affairs Editorial: Reforms must be implemented swiftly