There were 153 yeas, 146 nays, and one MP who declared himself present. The 145 MPs of ruling SYRIZA were joined by eight independent MPs and some from smaller parties. 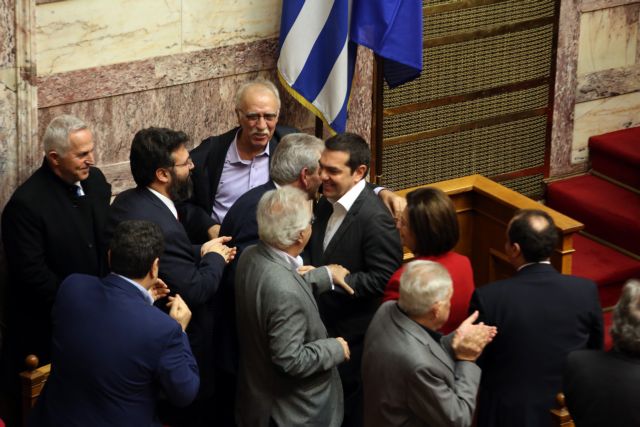 The Greece-FYROM Prespa Agreement was ratified by the Greek Parliament this afternoon, putting an end to an intractable dispute between the two countries over the name Macedonia and the issues of language, culture, and identity that has bedeviled the two countries, the Balkans, and the international community for over a quarter century.

The agreement re-names the country Republic of North Macedonia.

There were 153 yeas, 146 nays, and one MP who declared himself present. The 145 MPs of ruling SYRIZA were joined by eight independent MPs and some from smaller parties.

Grigoris Psarianos, who left To Potami before the ratification vote declared himself “present”.
Prime Minister Alexis Tsipras hailed the result as opening a new page in Balkan history in a tweet immediately after the vote.

“The hatred of nationalisms, conflicts, and clashes are giving way to friendship, peace, and cooperation. The future generations will owe a debt of gratitude to the MPs who boldly and courageously laid the foundations for a future of peace, solidarity, and harmonious co-existence between the two peoples,” the PM stated.

“North Macedonia, which was born today, will be a friend. It will be an ally and supporter of Greece in efforts to ensure security, stability, andco-development in the region,” he added.

TANEA Team 25 Ιανουαρίου 2019 | 17:27
Share
Δείτε επίσης
Περισσότερα άρθρα για Αγγλική έκδοση
In times of tensions military service is viewed as a national duty Editorial: Incentives for early military service
An emotional start in taking a position on developments in the region would be catastrophic Editorial: A measured response to Israeli-Palestinian conflict
The alternate interior minister said problems with COVID-19 self-tests will be resolved by the end of May Government poised to abolish mandatory SMD to leave home, working to solve self-test problems
If Syriza believes it can garner political gains with daily political transformations it is sorely mistaken Editorial: Political vertigo
Santander Consumer Finance begins activities in Greece
Evangelos Marinakis: Post-Covid Shipping and the Environment – Green Energy Investments
The US ambassador says Biden has “opened up a new vocabulary of cooperation” with Greece Pyatt see deeper US-Greece strategic ties under Biden administration
The case will be re-tried in the framework now set by the Council of State Bombshell Council of State ruling accepts state’s vaccine side-effect liability
May Day should be honoured with a single march each year Editorial: Unity
Transcending the collective crisis will require leadership and not troublemakers Editorial: Messages
After a six-month shutdown, workers in the restaurant business laid the tables Editorial: The first step
The government has repeatedly said that the existing framework is outdated Battle royal looms over government bill overhauling labour relations, limiting strike action
The labour trade union movement is an invaluable and irreplaceable weapon of workers An urgent need for the rebirth of the trade union movement
Editorial: The pendulum of American politics
The thirty-somethings rushed to be vaccinated for the sake of their families and their friends Editorial: Front-and-centre