In ignoring the pleas of the academic community, the state is failing to uphold basic rights such as the unhindered transmission of knowledge and the free exchange of ideas. 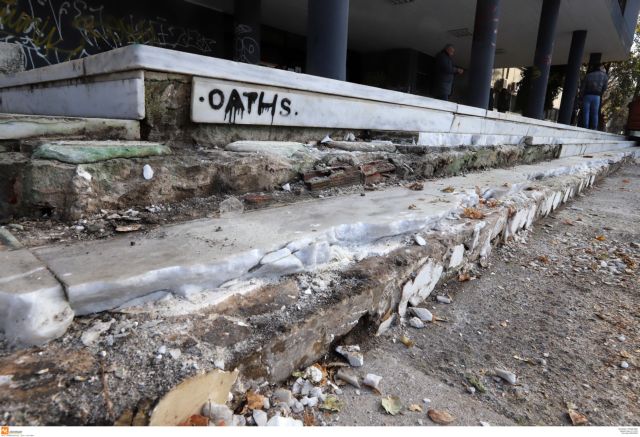 The education minister called upon university students to boldly fend off lawlessness on campuses. Another minister explained to those who engage in violence at universities that they are not battling the system in this manner.

Both approaches have proven ineffective, as the daily new entries in police crime logs bear witness to the fact that universities in our country have been transformed into ghettos.

It is only in ghettoes that guards are stabbed and that police think twice and thrice before cracking down on crime. Only in ghettoes are pleas for help from those who are in a position of weakness turned into cries of agony, because the state is not doing its duty.

Such a cry of agony was the substance of a letter drafted by University of Thessaloniki students and sent to President Prokopis Pavlopoulos and others.

In failing to protect universities, the state proves that it is essentially unable to protect academic freedom. In ignoring the pleas of the academic community, the state is failing to uphold basic rights such as the unhindered transmission of knowledge and the free exchange of ideas.

These rights are the quintessence of university education. No country should tolerate their violation, especially in places that are supposed to be temples of learning, and not lawless ghettos dominated by all types of fascistoid minorities and drug dealers.

Κοροναϊός: Μάχη με τον χρόνο για εμβόλια – θεραπείες
TANEA Team 10 Δεκεμβρίου 2018 | 14:25
Share
Δείτε επίσης
Περισσότερα άρθρα για Αγγλική έκδοση
German pig farmers suffer after abattoir’s closure
China braces for more rainstorms over weekend, climate change blamed
SYRIZA is battling to be the first party never to remove its head from the sand Editorial: Self-criticism
Democratic rule is not a given but it has strong antibodies and decades of experience Editorial: Judiciary
Dermitzakis sees task of National Council on Research, Technology and Innovation as key to economic recovery
Everything must come to light now! Editorial: Let everything come to light
Given the fact that Greece did very well in the first phase of the pandemic we can do it again now. Editorial: Restart
One can buttress a new type of citizen-friendly state and a public administration that will rely on expedite digital reform Editorial: State
Shadows, rumours about apartment owned by Greek Orthodox Archdiocese of Australia
The pandemic was a difficult test for students and teachers Editorial: Expectations
A key parameter is the alignment with Italy in the area of resources and fishing policy. Editorial: An historic agreement