In view of the start of exploration by ExxonMobil in bloc 10, and possible exercises that will bolster Ankara’s provocative stance, the whole enterprise appears to be at a razor’s edge. 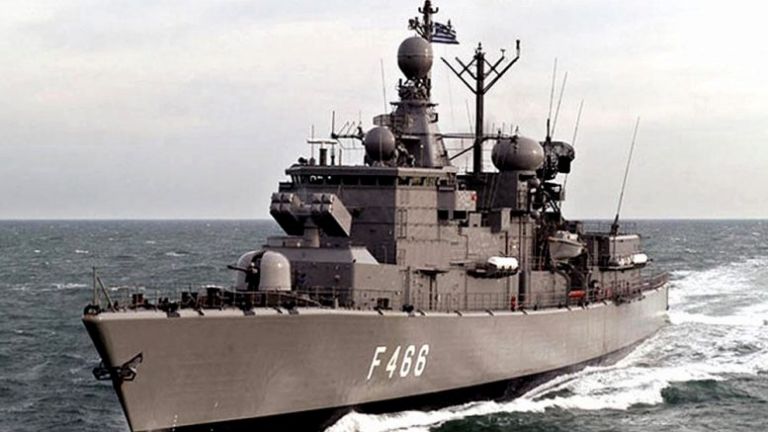 The Turkish seismographic vessel Barbaros has as of 17 October been off the coast of Cyprus at the margins of blocs 4 and 5 of Cyprus’ Exclusive Economic Zone (EEZ), and is preparing for illegal gas exploration following the issuance of a NAVTEX (navigational warning) which violates the sovereign rights of the Republic of Cyprus in its EEZ.

Turkey is escalating tensions in an effort to undermine Cyprus’ gas exploration deals by exploring for hydrocarbons in Cyprus’ EEZ, especially in bloc 7, and creating a de facto situation that will benefit Ankara in its objective of actively establishing itself in the geostrategic energy game in the Eastern Mediterranean.

In view of the start of exploration by ExxonMobil in bloc 10, and possible exercises that will bolster Ankara’s provocative stance, the whole enterprise appears to be at a razor’s edge.

HS Nikiforos Fokas is only a few nautical miles from the Barbaros, which is reportedly in plain sight of the Greek frigate.

The Greek warship has remained within the limits of Greece’s continental shelf and is shadowing the Barbaros in a signal that Greece has the necessary deterrent force.

Other Hellenic Navy units are reportedly on alert, in order to hasten to the area if necessary.

Effectively, Ankara has marshaled the NAVTEX in an effort to dispute Cyprus’ EEZ and the sovereign rights of the Republic of Cyprus, the only internationally recognised state entity on the island.

For Turkey, the Republic of Cyprus is not a state

In response to a NAVTEX  issued by the Republic of Cyprus and characterising Turkish exploration as illegal, as only the JRRC (Joint Rescue Coordination Center) in Larnaca has authority to issue a NAVTEX in Cyprus’ EEZ, Turkey maintains that it has rights “based on international law”, as in Ankara’s view the internationally recognised Republic of Cyprus is not a state.

The Barbaros will conduct exploration over an area of 44,000 square kilometres.

Fatih drill on its way

Sources say that within hours or days, the Turkish drill Fatih (conqueror in Turkish) will set out for the drilling area.

TANEA Team 18 Οκτωβρίου 2018 | 20:01
Share
Δείτε επίσης
Περισσότερα άρθρα για Αγγλική έκδοση
European supervised drug consumption sites have been an inextricable part of drug treatment Editorial: The first step
The overturning of Roe v. Wade turns the clock back 50 years for American women. Editorial: Back and forth
Thymios' statement - “I no longer trust people.” – is a punch in the gut. Editorial: A punch in the gut
Editorial: Audits of politicians' wealth
Mario Draghi has a prominent position in the EU architecture Editorial: Alliance
After a certain point, the necessary caution is a matter of personal responsibility Editorial: COVID-19 and personal responsibility
Extremists still constitute a threat Editorial: Threat
A consciously responsible stance is needed Editorial: Maintaining COVID-19 alertness
The late PM Constantine Karamanlis famously said, 'We belong to the West' Editorial: Contradictions
The end of EU enhanced fiscal supervision signals the exit from the tunnel Editorial: Breakthroughs
Head of Greek Pomaks’ Association rips into Erdogan’s revisionist expansionism
All Greek governments since Andreas Papandreou's demanded the return of the Marbles Osborne: ‘Deal to be done’ on sharing Parthenon Marbles
All efforts toward a radical resolution of the refugee problem have failed Editorial: The end does not justify the means
France's centrist forces are rallying behind President Emmanuel Macron Editorial: The political centre
The Germans are returning, this time not to impose their will but to cooperate Editorial: Greece as a bridge between Western Balkans, EU