The ‘forest’ of windmills at UNESCO’s doorstep

The drafting of the dossier of the windmills’ candidacy for the UNESCO list occurred after a nearly one-year study by the Peripatos cultural company. Personal accounts and historical sources brought important information to light. 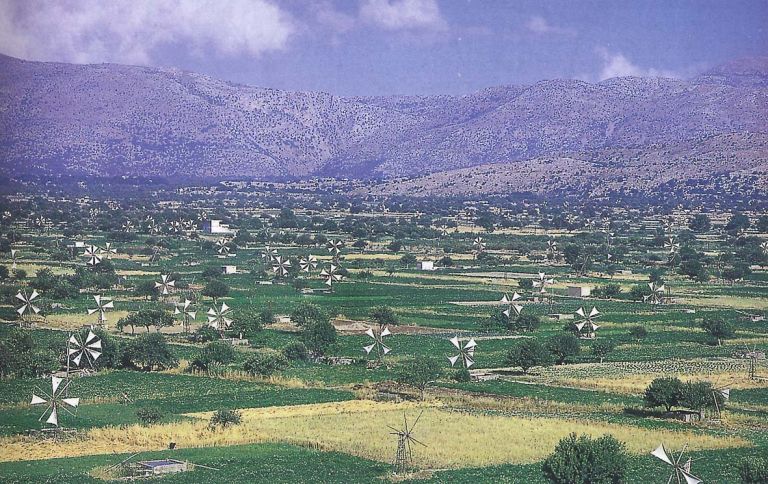 TANEA Team 17 Ιουλίου 2018 | 21:59
Share
By Eleni Evangelodimou
The image of a “forest” in Lasithi, Crete, with tall and thin metal trunks, and all white cloth, has become familiar around Greece and the world. It has been depicted in paintings, post-cards, stamps, and telephone calling cards. It was included in the lyrics of local Cretan mantinades songs, and was captured by the photographic lenses of tourists, and featured in academic publications abroad.
Now it stands at UNESCO’s doorstep, waiting to win a spot on the national catalogue of Intangible Cultural Heritage.
At one time, the setting was not only picturesque. For decades, the first Aeolian Park of the country had 6,500 windmills and helped farmers irrigate the fertile land of the plateau. Copies of the Cretan invention helped to quench the thirst of three continents: Asia, Africa, and America.
Aim of the municipality
The aim of the municipal authorities and residents is to revive as many windmills as possible, to once again irrigate the yellow-green flatland.
“At the moment, we have about 100 windmills with cloth. Some were reconstructed upon the initiative of locals and others by two cultural groups – Nostos and ELSOL. The municipality is already funding the area with the picturesque windmills in Eastern Crete and is also helping with the preservation of 10 windmills, with the aim of creating a total of 60 in 2018,” Yannis Stefanakis, the mayor of Oropedio Lasithiou told Ta Nea.
“We have also proposed funding for two programmes – Leader and the Comprehensive Local Investment, so as to reconstruct 300 windmills. We are aiming for a different approach to cultivation on small plots, zero environmental impact, and products that will automatically have added value,” he said.
The effort to recognise and revive the windmills of Lasithi has moved diaspora Greeks.
"They call me from America asking how they can help. There are thoughts of using crowdfunding or asking people to adopt a windmill."

The drafting of the dossier of the windmills’ candidacy for the UNESCO list occurred after a nearly one-year study by the Peripatos cultural company. Personal accounts and historical sources brought important information to light.
The inventor of the irrigation windmill was Emmanuel Papadakis, aka Spirtokoutis (matchbox), who had already in 1890 realised the benefits of renewable energy sources! Inspired by stone flour mills, Spirtokoutis made wooden windmills, with cloth that could not change direction.
Later, Stephanos Markakis replaced the wood with metal, which offered added height and better performance.
“The time came when this innovative model was implemented elsewhere to save lives. During a period of aridity in Africa and India, at the beginning of 1970, the UN sent engineers who copied the Lasithi windmill, finally transferring the know-how to Ethiopia and regions in India and in America.
Over the years, drawings of Spirtokoutis’ invention and praise for its innovative mechanism appeared in foreign publications. In July, 1979,researchers M.T. Kanaki and S.D. Probert, of the Cranfield Institute of Technology in the UK, wrote in the periodical Applied Energy, “A revival of interest in this type of windmill has been seen recently, due to the simplicity of its design and its low cost. One can achieve a relatively high degree of production of energy with low-speed windmills.”
The Committee on Aeolian Energy in Developing Countries, which is based in The Netherlands, in 1977 issued a manual for the construction of the Cretan windmill.
In 1981,the academic publication “Renewable Resource Utilization for Development” stated that, “Cretan windmills are especially attractive for implementation in developing countries due to their simple technical construction and the relatively cheap materials, wood and cloth.”
The inventor
On the façade of the pedestal where the sculpture of Emmanuel Papadakis had been placed, in his village of Psihro in Lasithi, there are recorded in 15 lines the milestones in the life of the Cretan inventor of the wooden windmill. The intelligence of Papadakis (1860-1913).earned him the moniker Spirtokoutis (matchbox).
Multi-talented, he was the father of eight children, and supported the unification of Crete and Greece, which he did not live to see.
The Cretan Polity honoured him for his contributions in October, 1905, when he was appointed city council member in his municipality of Psihro. One year later he was elected as an MP.
When the First Balkan War was declared in 1912, the by then military chieftain Spirtokoutis volunteered with dozens of others and ended up in Himara.
On 27 January, 1913, in the village of Paliouri, the 53-year-old native of Lasithi gave his life for the fatherland.

TANEA Team 17 Ιουλίου 2018 | 21:59
Share
Περισσότερα άρθρα για Αγγλική έκδοση
The EU’s adjustment of financial rules has facilitated the situation Editorial: Lessons
Editorial: The conundrum of early elections
It is common knowledge that all political parties seek the vote of Greece’s youth Editorial: Greece’s youth
In a democracy, elections cannot serve as a weapon for prime ministers Editorial: The need for electoral stability
Mitsotakis rules out any prospect of political consensus with SYRIZA
Merkel’s statement should lead us collectively to a rethinking of what happened and not reflexive indignation Editorial: The price of imprudent politics
Self-tests, contact tracing key to safe re-opening of schools Spike in COVID-19 cases expected after schools open next week
The repercussions of these illegal actions are not limited to public health Editorial: A threat to society
September has arrived, but the University Protection Groups did not keep the rendezvous Editorial: Rendezvous
Theodorakis exemplified the sacred and mystical marriage of music and poetry The Greek nation bids farewell to beloved composer Mikis Theodorakis
One must be very careful in making choices that will influence the education of future generations Editorial: The time has come for a bold ‘yes’
Hellenic Statistical Service Staikouras for GDP – Strong recovery confirmed
Destroying a minority: Turkey's September 6-7, 1955 pogrom against the Greeks of Istanbul
Addressing members of his AKP party in Rize, Erdogan accused the opposition of trying to keep Hagia Sophia closed Islamist, nationalist outburst from Erdogan on Hagia Sophia
The issue of food price hikes is decisive for maintaining social cohesion and social peace Editorial: Antidotes