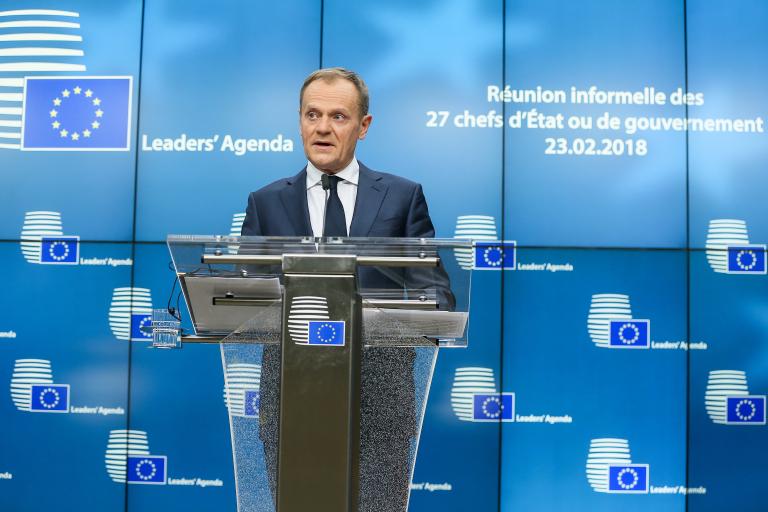 Following an informal European Unit summit this evening, European Council President Donald Tusk, speaking as he said on behalf of all 27 European Union member-states, denounced Turkey’s bellicose activity in the Aegean and in Cyprus’ Exclusive Economic Zone (EEZ) as a patent violation of the sovereign rights of two member states.

“On behalf of all EU leaders, I would like to express our solidarity with Cyprus and Greece, and urgently call on Turkey to terminate these activities,” Tusk said, in what was unprecedentedly harsh language from the EU about Ankara.

The intervention comes directly after Ankara succeeded in blocking the Italian energy giant ENI from drilling in Block 3 of the island’s EEZ, off the southeastern, Turkish occupied part of the island, and shortly before the American energy colossus ExxonMobil is to begin preliminary oil and gas exploration in Cyprus’ EEZ.

Ankara staged an air and sea blockade of the island, and even threatened to sink ENI’s huge SAIPEM 12000 drill.

“I reiterate our support for the sovereign right of the Republic of Cyprus to explore and exploit its natural resources, in accordance with EU and international law, including the UN Convention on the Law of the Sea,” Tusk said.

Tusk underlined that EU candidate-country Turkey’s actions are “a clear violation of Turkey’s commitment to good neighbourly relations, and the normalisation (of relations) with all member-states,” a direct reference to Turkey’s refusal to recognise the Republic of Cyprus.

When Cyprus was admitted to the EU in 2004, Protocol 10 of the Accession Treaty declared that the entire island acceded to the EU, but that implementation of the EU acquis, the body of European law and regulations, was suspended, pending a settlement between Greek Cypriots and Turkish Cypriots.

Ankara claims Cyprus’ decision to exercise its sovereign rights is “unilateral” and must be put off pending a settlement.

Nicosia has hoped that pursuing its hydrocarbons programme could be an incentive for Turkey to agree to a settlement that will be acceptable to both sides, but without Ankara having a right of intervention as a guarantor power, along with Greece and the UK, which retains its own sovereign bases on the island.

Anastasiadis, who was recently re-elected to a second five year term, has said that he is prepared to put party of the revenues from oil and gas deposits, in trust for the Turkish Cypriots.

TANEA Team 24 Φεβρουαρίου 2018 | 00:00
Share
Περισσότερα άρθρα για Αγγλική έκδοση
Editorial: Comparison
Over the last days the image of our country has not been attractive Editorial: A different image of Greece
There will be more weather crises in the future Editorial: Deficiencies
This young woman heard the message of other women that preceded her Editorial: Catharsis
Balances with the Russian side are very delicate and must be maintained Editorial: Composure
'Greece is a significant and wise actor in this part of Europe' Kosovo FM Donika Gervalla–Schwarz: ‘We are not begging for recognition from Greece’
People want answers, persuasive plans, and arguments Editorial: Maturation
The pandemic and citizens’ fears regarding inflation have shocked households Metron Analysis poll: SYRIZA trails New Democracy, KINAL-PASOK skyrockets
It is imperative for the weapons programme to be implemented immediately Editorial: Arrivals
The charges of the victim garnered attention nationwide Editorial: Support
Greece is a peaceful Western country Editorial: Vigilance
Both SYRIZA and PASOK are in a transitional phase Editorial: Changes
Tsipras posts on the social media and frequently as possible Editorial: Obligations
Universities have become a sort of state within the state Editorial: Enough is enough!
Nobody for whatever reason has the right to beat a professor Editorial: Zero tolerance