Tsipras declares Greece will not tolerate threats to sovereignty

'Greece is not a country that plays games. We are at the core of the European Union and a Nato member-state, with a strong regional role and international alliances. We are a country that is a pillar of stability and security in a more broadly destabilised region,' the PM stressed. 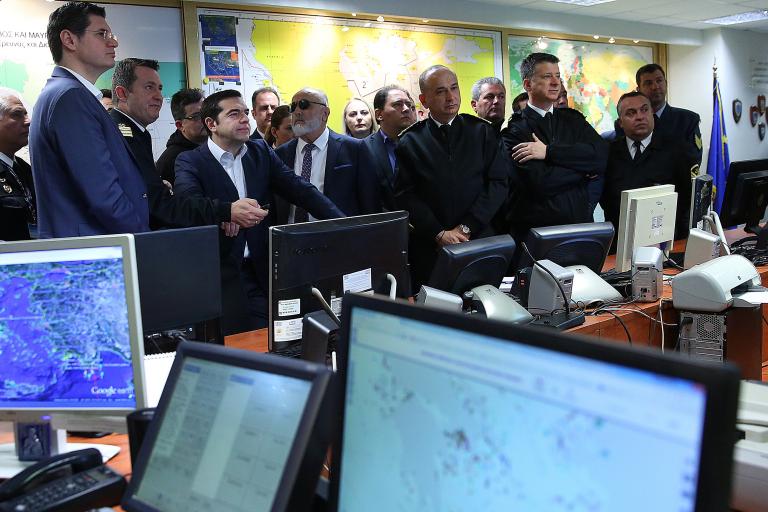 Just days after a Turkish Coast Guard ship rammed the Hellenic Coast Guard ship “Gavdos”, Prime Minister Alexis Tsipras visited the Greek Shipping Ministry, which has the Coast Guard under its purview, and congratulated the crew of the Greek, which with dextrous manoeuvres avoided a near sinking.

In an address that was directed at much towards Turkey as to Greece’s allies and partners, Tsipras made clear that Athens will not tolerate and challenges to its national sovereignty and territorial integrity.

“Greece is not a country that plays games. We are at the core of the European Union and a Nato member-state, with a strong regional role and international alliances. We are a country that is a pillar of stability and security in a more broadly destabilised region,” the PM stressed.

“In the last days, we saw incidents that violate international law, and I want to be perfectly clear, with the men and women before me who were on the “Gavdos”, the captain and the crew. The recent incident was the result of the absolutely irresponsible stance of the Turkish Coast Guard, which imperiled human lives,” in a message directed as much across the Aegean.

“Certainly, certain parties are annoyed by the upgraded role of Greece in the region. We call upon them to come to terms with this development…Let them know this well, that audacity and provocations are not only an irresponsible stance, but are also cowardly and dastardly,” he declared.

Tsipras was briefed on the situation currently around Imia at the Coast Guard Operations Centre, and met with officers from the select submarine commandoes teams, as well as with helicopter and aircraft units of the Hellenic Coast Guard.

TANEA Team 15 Φεβρουαρίου 2018 | 20:06
Share
Περισσότερα άρθρα για Αγγλική έκδοση
People want answers, persuasive plans, and arguments Editorial: Maturation
The pandemic and citizens’ fears regarding inflation have shocked households Metron Analysis poll: SYRIZA trails New Democracy, KINAL-PASOK skyrockets
It is imperative for the weapons programme to be implemented immediately Editorial: Arrivals
The charges of the victim garnered attention nationwide Editorial: Support
Greece is a peaceful Western country Editorial: Vigilance
Both SYRIZA and PASOK are in a transitional phase Editorial: Changes
Tsipras posts on the social media and frequently as possible Editorial: Obligations
Universities have become a sort of state within the state Editorial: Enough is enough!
Nobody for whatever reason has the right to beat a professor Editorial: Zero tolerance
The shift in America’s priorities should come as no surprise Editorial: Fluidity
We have the weapons, the experience, and obviously the collective will Editorial: Transcending the pandemic
How do you negotiate with Vladimir Putin? Editorial: Dilemma
Editorial: Phenomenon
Maintaining tensions does not contribute to dialogue or good neighbourly relations Editorial: Pragmatism in Greek-Turkish relations
The alarm bell of daily life is urgently ringing Editorial: Alarm bell