Dr Konstantina Kitsou, the first author of the study said: “These findings underline the importance of prevention strategies with vaccinations to avoid the reactivation of endogenous pathogens and the dangerous inflammatory processes triggered by COVID-19.” 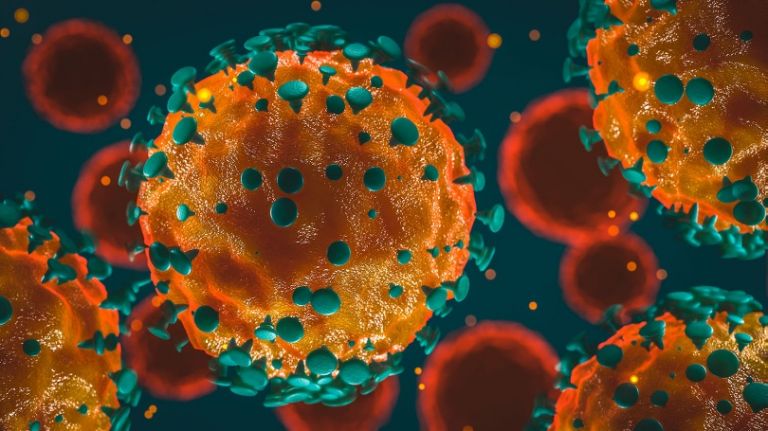 An international team from the National and Kapodistrian University of Athens, the Hellenic Pasteur Institute, the University of Oxford, Imperial College, and Birmingham City University dug deeply with computer algorithms into millions of RNA molecules produced in the lung fluid of patients with SARS-CoV-2 to find-out if and which dormant endogenous viruses were stimulated, whether they may be linked to severe and long COVID, and whether the findings could lead to new treatments.

The Applied Evolutionary Virology Group is the Greek team that led the study and is currently based in the Department of Hygiene, Epidemiology and Medical Statistics at the Athens University Medical School.

The study, which was published today in the journal Microbiology Spectrum, opens the way toward our further understanding of how the overlooked part of the human genome might be important in COVID-19.

The group developed specialised computer algorithms that could look into millions of RNA molecules and specifically identify those belonging to the said dangerous parts of the “dark genome”.

Dr Konstantina Kitsou, the first author of the study said: “These findings underline the importance of prevention strategies with vaccinations to avoid the reactivation of endogenous pathogens and the dangerous inflammatory processes triggered by COVID-19.”

Athens University Medical School Professor Gkikas Magiorkinis, who led the study said: “These three awakened endogenous retroviruses are known to be particularly pathogenic and are thus dangerous if abnormally produced. Their intense stimulation in the lungs of Covid-19 patients is a hallmark of a highly dangerous pathogenic process."

The researchers focused on 13 types of these ancient relics for which previous research has shed light on their potential roles in health and disease.

The groundbreaking research has found that SARS-CoV-2 stimulates a combination of potentially pathogenic retroelements in the lung of COVID-19 patients. These specific retroelements are the remnant of retroviral infections that infected our deep-in-time ancestors millions of years ago.

The research community initially knew little about their potential functionality. They have been thought of as “junk DNA”, and are referred to as the “dark genome”.

The specific activated retroviruses are implicated in human inflammatory diseases such as lupus and multiple sclerosis, but also cancer.

Researchers said that the abnormal activity of retroviruses in patients is likely to contribute to severe and long-term COVID-19.

The researchers found that opportunistic pathogenic endogenous retroviruses have been awakened in a manner similar to that in patients with severe inflammatory diseases.

They were surprised to find that the three that are most intensely stimulated are those for which scientists have the best evidence on their roles in health and disease.

The new study found that SARS-CoV-2 stimulates a combination of potentially pathogenic retroelements in the lung of COVID-19 patients.

These specific retroelements are the remnant of retroviral infections that infected our deep in time ancestors millions of years ago. As the research community initially knew little about their potential functionality, they have been thought as “junk DNA”, and are hence also called “dark genome”.

The specific activated retroviruses are implicated in human inflammatory diseases such as lupus and multiple sclerosis, but also cancer.

Researchers said that the abnormal activity of retroviruses in patients is likely to contribute to severe and long-term COVID-19.

SARS-CoV-2 causes severe lung damage, and death, by inducing severe inflammation. Once the inflammatory process has progressed, there is little to be done to improve prognosis through available treatment interventions.

Inflammation can be caused through various processes. A deeper understanding of what sort of inflammation is caused in the lungs of COVID-19 patients will allow researchers to develop treatments to target late stages of COVID-19 more effectively.

Seeking answers from millions of years ago

Our DNA is littered with thousands of endogenous retroviruses that are the remnants of ancient infections. These are the result of at least 30 ancient epidemics that plagued our deep-in-time ancestors millions of years ago, long before the rise of humans.
These relics are normally dormant, but they have been found to be stimulated in diseases such as cancer, lupus and multiple sclerosis. Their stimulation contributes to pathological inflammation observed in such patients.

A dangerous dark genome cocktail, co-opted ancient viruses
The first extraordinary finding was that Syncytins were the most highly stimulated endogenous retroviruses in the lung-fluid of patients with Covid-19.

Syncytins are co-opted ancient viruses that are important for, and thus normally produced in, the placenta. Syncytin-1 contributes to the anatomical formation of the placenta by inducing the fusion of cells.

The abnormal stimulation of Syncytin-1 in the lung of Covid-19 patients is very likely to contribute to the severity of the disease by inducing cell-fusion. Crucially, fused cells have already been described in post-mortem lung biopsies of Covid-19 patients and thought to play a role in severe disease.

Syncytin-1 has been also shown to induce inflammation when abnormally produced, thus it is considered opportunistically pathogenic. It has been linked with Multiple Sclerosis and a monoclonal antibody treatment against Syncytin-1 is currently under development.

Anosmia, the loss of smell, is a common symptom of COVID-19. Anosmia might take months to resolve in some patients. This is an indication of significant neuroinflammation resulting from viral activity. This could be explained by stimulation of Syncytin-1, an endogenous retrovirus implicated in neuroinflammation in Multiple Sclerosis.

Similarly, neuroinflammation could explain symptoms observed in patients with long-COVID.

Syncytin-2 is known for the immunosuppressive properties, it is also expressed in the placenta and normally protects the foetus from mother’s immune response.

The abnormal stimulation of Syncytin-2 in the lung of Covid-19 patients is likely to protect infected cells from immune-responses, thus allowing SARS-CoV-2 to replicate more efficiently by dodging immune surveillance.

While the impact of the stimulation of HERV-H in acute Covid-19 remains elusive, it is likely to block regeneration processes in the lung. It might thus contribute to long-term disease as stem-cell processes are involved in the development of cancer.

The researchers also investigated millions of RNA molecules produced in an artificial cell system of lung ageing. They found that lung ageing results in dysregulation of endogenous retroviruses

TANEA Team 7 Οκτωβρίου 2021 | 00:51
Share
Δείτε επίσης
Περισσότερα άρθρα για Αγγλική έκδοση
Meetings with President Katerina Sakellaropoulou, Archbishop Ieronymos Pope Francis to visit Cyprus, Greece in December
Evangelos Marinakis on CPLP’s bond listing at the Athens Stock Exchange: “Green investments are the future”
Washington concerned about religious freedom of the patriarchate in Turkey Vartholomeos has one-hour meeting with Biden: Religion, rights, and geopolitics on US visit
What a great thing it is to be fighting for your life even as you battle for the common good! Editorial: Standing tall
It is the greatest foreign policy crisis in Erdogan's 19 years in power Following domestic, international uproar Erdogan backs off on expulsion of 10 Western ambassadors
The UN Secretary has warned that humanity is already in a state of emergency Editorial: A duty towards our children
'The UK played a decisive role in achieving Greece’s independence' FM Nikos Dendias: Greece-UK bilateral cooperation agreement to include defence and security issues
Vartholomeos has fervently pursued inter-faith dialogue with the Muslim and Jewish faiths Religion, rights, and geopolitics on Vartholemos' US visit, meetings with Biden, Blinken, Pelosi
At Greek universities progress is battling regression. Editorial: Two worlds
Editorial: Opportunity
Angela Merkel – In Athens on October 28 and 29
If the pandemic is checked, we can hope for much better days Editorial: Turning point for Europe
Record-breaking over-subscription for CPLP bond issue
We have a duty to ensure for families a network of protection in our schools. Editorial: Maintaining balances
We have the power to leave behind this unprecedented crisis. Editorial: Exiting the pandemic