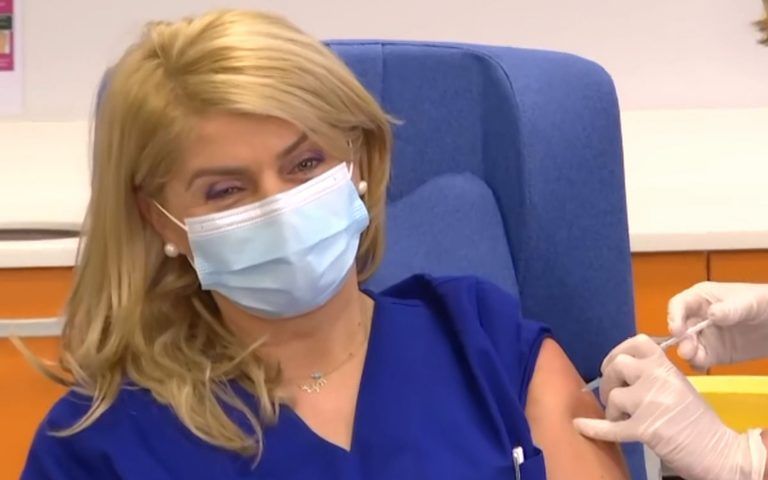 With a thumbs up shortly after 1pm today Efstathia Kambisiouli - the head nurse at COVID-19 reference hospital Evangelismos - became the first Greek to receive the Pfizer-Bio-N-Tech vaccine.

A semior citizen at a care home, 88-year-old Michalis Giovanidis was the second,  and he was followed by President Katerina Sakellaropoulou, with Prime Minister Kyriakos Mitsotakis, Profeessor of Epidemiology Sotirios Tsiodras and Parliament Speaker Konstantimos Tasioulas coming afterwards.

The first 45 Greeks to be vaccinated will include top state officials including military top brass,  the ministers and deputy ministers of health and of foreign affairs as well as top brass from the Hellenic Armned Forces, the Hellenic Coast Guard, and Greek Police.

The number of vaccines apportioned by the EU is proportional to the member-state's population.

The arrival of the vaccines in country by truck was accompanied by theatrics with life videeo of the vehicles and police escort and initial reports that the vaccines would be stored in a top secret location which the media swiftly revealed was Kryoneri, Attica.

The first batch of the 9,750 doses of the vaccine  arrived in Greece late on Christmas day.

The first group to be vaccinated is the people working at COVID-19 referral hospitals in Attica, including Evangelismos and Sotiria, which have borne the brunt of the crisis in Attica.

The vaccine will be delivered to to referral hospitals tomorrow.

The second batch of 83,850 doses of the same vaccine is expected to arrive by 30 December.

According to the EU's distribution arrangement the Pfizer vaccines doses that correspond to the Greek population are another 429,000 until the end of January another 333.450 doses by the end of February and until the end of March Greece is expected to have received a total of 1,265,550 doses of Pfizer's vaccine.

TANEA Team 27 Δεκεμβρίου 2020 | 14:40
Share
Περισσότερα άρθρα για Αγγλική έκδοση
People want answers, persuasive plans, and arguments Editorial: Maturation
The pandemic and citizens’ fears regarding inflation have shocked households Metron Analysis poll: SYRIZA trails New Democracy, KINAL-PASOK skyrockets
It is imperative for the weapons programme to be implemented immediately Editorial: Arrivals
The charges of the victim garnered attention nationwide Editorial: Support
Greece is a peaceful Western country Editorial: Vigilance
Both SYRIZA and PASOK are in a transitional phase Editorial: Changes
Tsipras posts on the social media and frequently as possible Editorial: Obligations
Universities have become a sort of state within the state Editorial: Enough is enough!
Nobody for whatever reason has the right to beat a professor Editorial: Zero tolerance
The shift in America’s priorities should come as no surprise Editorial: Fluidity
We have the weapons, the experience, and obviously the collective will Editorial: Transcending the pandemic
How do you negotiate with Vladimir Putin? Editorial: Dilemma
Editorial: Phenomenon
Maintaining tensions does not contribute to dialogue or good neighbourly relations Editorial: Pragmatism in Greek-Turkish relations
The alarm bell of daily life is urgently ringing Editorial: Alarm bell