«If a company is able to offer guidance it shows that they’re able to have a better idea of what’s coming down the road,» said Charlie Ripley, senior investment strategist at Allianz Investment Management. 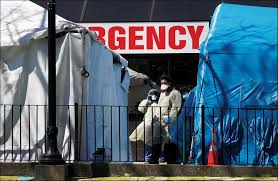 With earnings season in full swing, more companies are again offering earnings guidance, signaling to investors that some corporations are adapting to uncertainty about a global pandemic that may extend deep into next year.

Overall, 73 companies in the S&P 500 index have offered guidance this quarter so far, up from last quarter’s 65 pre-announcements but well below the 170 companies that typically offer guidance, according to Refinitiv data. The companies offering guidance are giving the most bullish expectations in Refinitiv data going back to 1997.

«If a company is able to offer guidance it shows that they’re able to have a better idea of what’s coming down the road,» said Charlie Ripley, senior investment strategist at Allianz Investment Management.

The market has been buffeted by cross-currents related to the looming Nov. 3 U.S. presidential election, drawn out fiscal stimulus talks in Washington and a resurgent pandemic. Still, investors appear more hopeful in recent months.

Fifty percent of high net worth U.S. investors surveyed by UBS Global Wealth Management voiced optimism on the economy, up from 41% three months prior, with 55% optimistic on stocks, up from 44%. The S&P 500 index is up nearly 7% year to date, including a 2.2% gain since the start of October.

So far this quarter, shares of AT&T Inc, Verizon Communications Inc and Quest Diagnostics Inc have rallied after each company gave investors updated guidance on how they expect to fare over the next fiscal year.

«It’s not surprising we’ve had so many beats this quarter because we entered the season with very little guidance,» causing analysts to slash their estimates, said Katie Nixon, chief investment officer at Northern Trust Wealth Management.

«Now we’re seeing how companies expect to be able to navigate through the challenges of the year ahead,» she said.

Investors next week will wade through the busiest period of earnings season so far, with companies ranging from Beyond Meat Inc and Microsoft Corp to Pinterest Inc scheduled to report results.

Microsoft, in particular, should outperform its conservative guidance thanks to strong PC shipments and growth of its Azure cloud computing platform, said J. Derrick Wood, an analyst at Cowen.

«The set-up feels more compelling as the bar was reset last quarter and as macroconditions are improving,» he said.

Nearly 86% of companies that have reported earnings so far have beat analyst expectations, a rate 20 percentage points higher than the average beat rate since 1994, according to Refinitiv data.

Still, investors like Nixon say they are looking past beat rates and focusing on companies that can improve or maintain measures such as refinancing debt, raising cash, and controlling costs regardless of the pandemic’s trajectory or a breakthrough in stimulus talks.

The White House and congressional Democrats remain in negotiations for another coronavirus relief bill, though Senate Majority Leader Mitch McConnell has signaled he may not bring the bill to the floor until after the election.

Companies in the S&P 500 index are likely to post average earnings growth rates of up to 25% next year as they bounce off of prior-year comparisons during the worst of the economic lockdowns, said Steve Chiavarone, a portfolio manager at Federated Hermes.

«We’re seeing a lot of positive metrics that show that these companies may be able to easily absorb any cut to earnings,» he said.

TANEA Team 23 Οκτωβρίου 2020 | 17:53
Share
Περισσότερα άρθρα για Αγγλική έκδοση
There is a danger of the war being viewed as something normal Editorial: Taking measures
Athens' objective was to avert concessions that might affect Greek interests Greece, Turkey declare their satisfaction with results of NATO summit
What is at stake is the strategic depth of the Alliance Editorial: A crucial NATO summit
European supervised drug consumption sites have been an inextricable part of drug treatment Editorial: The first step
The overturning of Roe v. Wade turns the clock back 50 years for American women. Editorial: Back and forth
Thymios' statement - “I no longer trust people.” – is a punch in the gut. Editorial: A punch in the gut
Editorial: Audits of politicians' wealth
Mario Draghi has a prominent position in the EU architecture Editorial: Alliance
After a certain point, the necessary caution is a matter of personal responsibility Editorial: COVID-19 and personal responsibility
Extremists still constitute a threat Editorial: Threat
A consciously responsible stance is needed Editorial: Maintaining COVID-19 alertness
The late PM Constantine Karamanlis famously said, 'We belong to the West' Editorial: Contradictions
The end of EU enhanced fiscal supervision signals the exit from the tunnel Editorial: Breakthroughs
Head of Greek Pomaks’ Association rips into Erdogan’s revisionist expansionism
All Greek governments since Andreas Papandreou's demanded the return of the Marbles Osborne: ‘Deal to be done’ on sharing Parthenon Marbles