'I am committed to fewer taxes, many investments, for good and new jobs, and growth which will bring better salaries and higher pensions in an efficient state' Mitsotakis said. 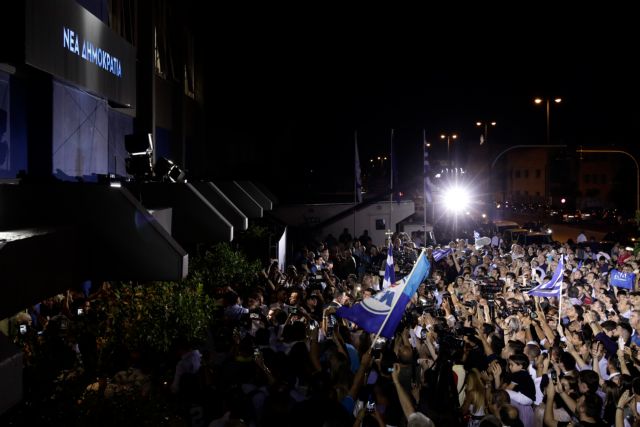 Greece’s opposition conservatives returned to power with a landslide victory in snap elections on Sunday, and Prime Minister elect Kyriakos Mitsotakis said he had a clear mandate for change, pledging more investments and fewer taxes.
The win appeared driven by fatigue with years of European Union-enforced belt-tightening, combined with high unemployment, after the country almost crashed out of the euro zone at the height of its financial travails in 2015.
Conservative New Democracy had a commanding lead of 39.6 percent of the vote based on 73 percent of the votes counted versus 31.6 percent for incumbent leftist Prime Minister Alexis Tsipras’ Syriza, the official interior ministry tally showed.

Exit polls showed New Democracy winning between 155 and 167 seats in the 300 member parliament, taking advantage of an electoral system which gives bonus seats to the front-runner.

Mitsotakis said in a televised address that the election outcome gave him a strong and clear mandate to change Greece.“I am committed to fewer taxes, many investments, for good and new jobs, and growth which will bring better salaries and higher pensions in an efficient state,” Mitsotakis said.

Tsipras said he respected the will of the Greek people.

“Today, with our head held high we accept the people’s verdict. To bring Greece to where it is today we had to take difficult decisions (with) a heavy political cost,” he told journalists.

Tsipras took over from the conservatives in 2015 as Greece was at the peak of a financial crisis which had ravaged the country since 2010. Initially vowing to resist deeper austerity, he was forced into signing up to another bailout months after his election, a decision which went down badly with voters.

The handover will take place on Monday, after Mitsotakis’s swearing in as new Prime Minister.
Sunday’s poll was the first national election since the country shook off close scrutiny by its European partners who loaned Greece billions in three bailouts.

Tsipras signed up to the latest, in 2015, in return for debt relief.

Mitsotakis, 51, assumed the helm of New Democracy in 2016. Although he is regarded as a liberal, his party also harbors members with more right-wing views.

Golden Dawn, an extreme right-wing party detractors accuse of having neo-Nazi sympathies, lost significant ground and did not reach the 3 percent threshold to parliament.

TANEA Team 8 Ιουλίου 2019 | 02:14
Share
Δείτε επίσης
Περισσότερα άρθρα για Αγγλική έκδοση
European supervised drug consumption sites have been an inextricable part of drug treatment Editorial: The first step
The overturning of Roe v. Wade turns the clock back 50 years for American women. Editorial: Back and forth
Thymios' statement - “I no longer trust people.” – is a punch in the gut. Editorial: A punch in the gut
Editorial: Audits of politicians' wealth
Mario Draghi has a prominent position in the EU architecture Editorial: Alliance
After a certain point, the necessary caution is a matter of personal responsibility Editorial: COVID-19 and personal responsibility
Extremists still constitute a threat Editorial: Threat
A consciously responsible stance is needed Editorial: Maintaining COVID-19 alertness
The late PM Constantine Karamanlis famously said, 'We belong to the West' Editorial: Contradictions
The end of EU enhanced fiscal supervision signals the exit from the tunnel Editorial: Breakthroughs
Head of Greek Pomaks’ Association rips into Erdogan’s revisionist expansionism
All Greek governments since Andreas Papandreou's demanded the return of the Marbles Osborne: ‘Deal to be done’ on sharing Parthenon Marbles
All efforts toward a radical resolution of the refugee problem have failed Editorial: The end does not justify the means
France's centrist forces are rallying behind President Emmanuel Macron Editorial: The political centre
The Germans are returning, this time not to impose their will but to cooperate Editorial: Greece as a bridge between Western Balkans, EU