Editorial: At the push of a button

The entire economy has fallen victim to over-taxation, for which the government opted so to collect funds for electoral handouts at the end of its term. 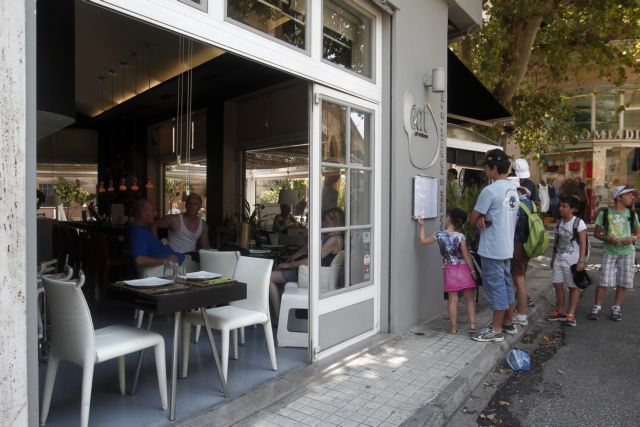 One cannot reform an economy at the push of a button.

That was confirmed very recently when the VAT on the Greek restaurant industry was slashed from 24 percent to 13 percent.

Instead of the consumer benefiting from the cut, entrpreneurs hiked their prices to reap the benefit for themselves.
For some of those businesses the motivation was simply greater profit.

Undoubtedly, many in the industry had faced insufferable pressure from tax and insurance contribution hikes over the last several years.

That pressure naturally is not confined to the restaurant industry.

The entire economy has fallen victim to the over-taxation that the government consciously chose in order to collect funds for electoral handouts at the end of its term.

The government chose the disastrous old-party route of political clientelism.

As the ministers involved in economic planning conceded in Parliament, the main victim of this strategy was the middle class.

It took an electoral trouncing in the 26 May European Parliament, regional, and municipal elections for the government to realise that its strategy was both economically and politically counter-productive.

It appears, however, that it is far too late.

Just as an economy does not change at the push of a button, so, too, the disposition of the electorate cannot change overnight.

It takes very much more.

Τι θα κάνουν τα funds με τα δάνεια – Πώς θα σταματήσουν οι μαζικοί πλειστηριασμοί
TANEA Team 2 Ιουνίου 2019 | 18:33
Δείτε επίσης
Περισσότερα άρθρα για Αγγλική έκδοση
Editorial: Pillar
Editorial: Crisis
Government and opposition are skirmishing over the rubble in Mati Editorial: Duty
As it turned out Mega was too big to die Editorial: The return of Mega Channel
The government cannot address the problem of school violence on its own Editorial: Wave of violence
Job creation is the overarching aim so that society can prosper Editorial: Automatic pilot
Right now there must be delicate diplomatic manoeuvres abroad and a solid front domestically Editorial: Consensus
Editorial: Delusions
Editorial: Readiness
It seems that freedom of speech cannot be taken for granted in our country Editorial: Fascism
At last it seems that reason is prevailing over belief and superstition about vaccines Editorial: Sirens
Dialogue must continue to be a basic pillar of Greek foreign policy Editorial: Dialogue
SYRIZA links Oruc Reis incident to Turkey's disputation of Greek sovereignty over Aegean islets
The state is obliged to determine which groups are serving humanistic ideals and which are simply exploiting human misery Editorial: Investigation
Electronic prescriptions a much-needed push toward digital modernisation