Kotzias was the architect of the Prespa Agreement and Kammenos and his Independent Greeks party (then the junior coalition partner) vehemently opposed it. 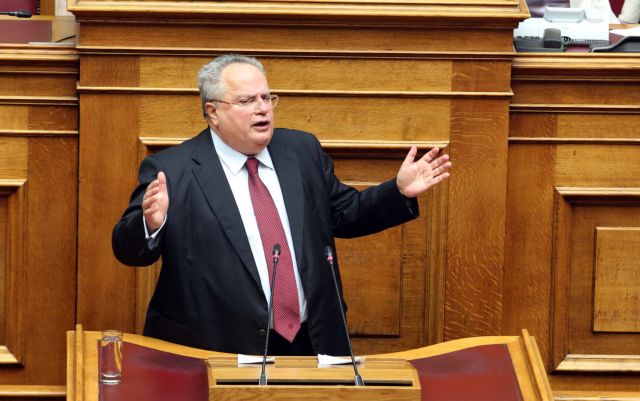 In the lawsuit, Kotzias accuses Kammenos of masterminding and engaging in verbal abuse, slander, threats, and the dissemination of false news against the government. He also reserved the right to seek monetary compensation for the harm to his reputation.

Kotzias resigned in October when in a stormy cabinet meeting Kammenos alleged that George Soros had given the government 50mn euros to buy off politicians in North Macedonia (then FYROM) in order to pass the Greece-FYROM Prespa Agreement.

Kotzias was the architect of the Prespa Agreement and Kammenos and his Independent Greeks party (then the junior coalition partner) vehemently opposed it and later pulled out of the government when it was about to be tabled in the Greek Parliament for ratification.

“I believe that it is necessary for the court to protect me,” Kotzias stated in the lawsuit. “I would like declare before the Greek judiciary that his (Kammenos’) planned targeting of me beginning in the summer of 2018 renders him potentially responsible for anything bad that may happen to me or my family, to our physical or mental health. This targeting could give the impression to someone who is familiar with international relations that there is something else behind this “inexplicable rage”.

Kotzias filed the lawsuit through his attorney Christos Koutsonasios, who is a member of the political secretariat of Kotzias’ Pratto political movement. In it he refers at length to threats and pressures that he received at various times regarding the Prespa Agreement and cites the allegedly slanderous remarks of the former defence minister regarding the alleged funding of the government by George Soros with 50mn euros, the illegal granting of contracts by the foreign ministry, and the misappropriation of outlandish and non-existent amounts from the ministry’s black funds.

Two members of Pratto’s political secretariat were present when the lawsuit was filed – Yorgos Sakellariou and Michalis Kokkinos, who is the foreign ministry’s general secretary for diaspora issues.

TANEA Team 18 Φεβρουαρίου 2019 | 16:58
Share
Δείτε επίσης
Περισσότερα άρθρα για Αγγλική έκδοση
Pappas' case concerns how institutions were exploited during Syriza’s rule, between 2015 and 2019 Editorial: Duty
Editorial: Barbarity
In times of tensions military service is viewed as a national duty Editorial: Incentives for early military service
An emotional start in taking a position on developments in the region would be catastrophic Editorial: A measured response to Israeli-Palestinian conflict
The alternate interior minister said problems with COVID-19 self-tests will be resolved by the end of May Government poised to abolish mandatory SMD to leave home, working to solve self-test problems
If Syriza believes it can garner political gains with daily political transformations it is sorely mistaken Editorial: Political vertigo
Santander Consumer Finance begins activities in Greece
Evangelos Marinakis: Post-Covid Shipping and the Environment – Green Energy Investments
The US ambassador says Biden has “opened up a new vocabulary of cooperation” with Greece Pyatt see deeper US-Greece strategic ties under Biden administration
The case will be re-tried in the framework now set by the Council of State Bombshell Council of State ruling accepts state’s vaccine side-effect liability
May Day should be honoured with a single march each year Editorial: Unity
Transcending the collective crisis will require leadership and not troublemakers Editorial: Messages
After a six-month shutdown, workers in the restaurant business laid the tables Editorial: The first step
The government has repeatedly said that the existing framework is outdated Battle royal looms over government bill overhauling labour relations, limiting strike action
The labour trade union movement is an invaluable and irreplaceable weapon of workers An urgent need for the rebirth of the trade union movement