There are concerns in Greece that MPs who have declared their support may switch at the last moment, so as to ensure their political survival in the general election. 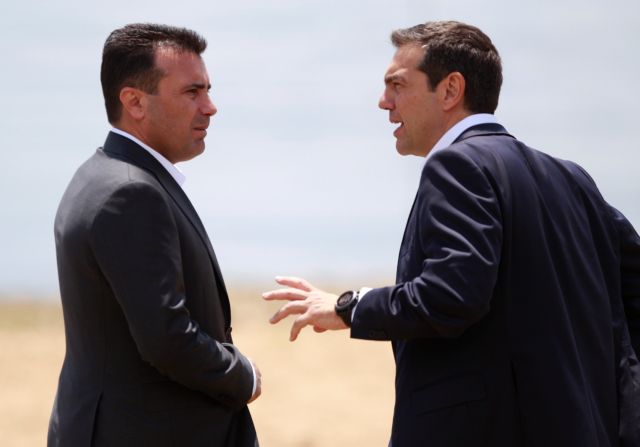 The new year brings with the crucial final push to pass and put into effect the Greece-FYROM naming accord, as Skopje moves toward final approval of the require amendments to the Constitution, and Athens braces for a difficult ratification in the Greek Parliament.

PM Alexis Tsipras has said that the accord will be tabled in parliament by March.

In FYROM, the crucial third and final vote in the amendment process will be held by 15 January, as Prime Minister Zoran Zaev has announced.

Tsipras and his SYRIZA party have been outwardly optimistic about garnering the necessary simple majority of 151 votes in the 300-seat legislature, despite the fact that their junior coalition partner, Defence Minister Panos Kammenos’ Independent Greeks, has vowed to vote down the accord and withdraw its MPs from the cabinet.

In the event that main opposition New Democracy tables a no-confidence motion, which is not unlikely, the government will need at least 150 “no” votes, which is a given if Kammenos heeds his pledge not to topple the government.

The prime minister has said that right after ratification of the Prespa Accord, the government will table in Parliament the Protocol on FYROM’s admission to Nato, which the legislatures of all of the Alliance’s member-states must approve.

While ministers and other SYRIZA cadres are expressing confidence that the agreement will be ratified, the fact is that all MPs are under severe pressure not to approve it, as all opinion polls show that the vast majority of Greece are against it.

That raises concerns that MPs who have declared their support may switch at the last moment, in order to ensure their political survival in the next general election, which must be held by October.

Tsipras is counting on the votes of MPs of the centre-right To Potami party and some Independent Greeks renegades.

For the time being, however, only MPs Spyros Danellis of To Potami and Thanasis Papachristopoulos of the Independent Greek have stated categorically that they will vote to ratify the agreement.

Tourism Minister Elena Kountoura has not made clear how she will vote.

Deputy Citizen’s Protection Minister Katerina Papakosta, who is collaborating with the government as head of her newfangled Nea Elliniki Ormi party (New Greek Thrust), is expected to endorse the agreement.

A veteran New Democracy MP who was expelled from the party by leader Kyriakos Mitsotakis, Papakosta is believed by some analysts to have agreed with the PM to support the accord when he appointed her to the cabinet, but she has avoided taking a stand publicly, and here too political survival, which in this case may be linked to SYRIZA, will play a key role.

It is also unclear how Thanasis Theocharopoulos, the leader of the small Democrat Left Party (DIMAR), a component of Fofi Gennimata’s centre-left Movement for Change (KINAL), will vote, as Gennimata has decided that the party will vote down the Greece-FYROM agreement.

Κοροναϊός : Εφιαλτικές εικόνες στο Εκουαδόρ – Πτώματα παρατημένα στους δρόμους
TANEA Team 2 Ιανουαρίου 2019 | 13:04
Share
Δείτε επίσης
Περισσότερα άρθρα για Αγγλική έκδοση
Solidarity is not a matter that concerns only the pinnacle of the social pyramid - the  state Editorial: Assistance
Protecting the citizenry is a fundamental objective of contemporary democracies Editorial: Protection
Quite rightly the government in this phase has made public health its top priority Editorial: Priorities
How European Banking Supervision can help fight the economic consequences of the coronavirus outbreak in Europe
The past can teach us valuable lessons today and equip us for the future Editorial: Lessons
Neither the state nor society can wage this battle on their own Editorial: Rallying cry
Editorial: Action
We can be relatively optimistic because at least we got off to a good start in this struggle for survival. Editorial: Optimism
Editorial: Collateral damage
The Greek president reminded the EU of the values that Greece serves and that Europe must not cease serving Editorial: Messages
Greece takes sweeping measures to protect business, labour from coronavirus tempest
EU shuts borders to impede march of 'the enemy' Coronavirus pandemic
There can be absolutely no complacency or laxness in responding to the Coronavirus pandemic Editorial: Uphill battle
Health ministry announces slight rise in Covid-19, over 4,000 test conducted
At this time of crisis one must not enforce rules that were adopted for normal timeS Editorial: Trying times