Editorial: End of an era?

Chancellor Merkel’s authority is already being disputed, including by her former finance minister and current parliament speaker, Wolfgang Schaeuble, who said that at some point the end comes along for a politician. 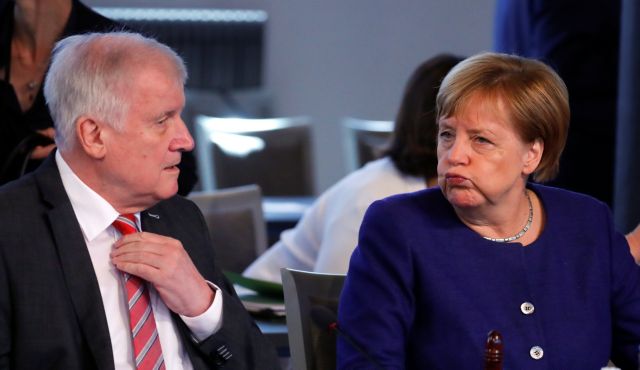 It would be mistaken to believe that the elections to be held tomorrow in the state of Bavaria are solely a German affair.

These elections concern all Europeans, and certainly our own country. The reason is not the unfortunate turn of phrase of the leader of the Bavarian Social Union, Horst Seehofer, on a campaign stop, where he quipped that it would be well if the Bavarians had ruled Greece for longer. The reason does not lie in the historical past, but rather the political present, and its impact on the future.

Tomorrow’s election may very possibly act as a catalyst for political developments.

The ruling coalition of the CDU, the CSU and the SDP has already been severely tested, despite the fact that it has been in power for only one year. A negative result for the ruling parties, as political polls project, will almost certainly trigger new friction.

Could that lead even to a collapse of the government? Nothing can be ruled out. Chancellor Merkel’s authority is already being disputed, including by her former finance minister and current parliament speaker, Wolfgang Schaeuble, who said that at some point the end comes along for a politician.

These elections may signal the beginning of the end, and not just for a politician. When we are speaking about a Chancellor who has been in power since 2005, it would most certainly be the end of an era. It would have an impact beyond Germany.

That means that our country must be adequately prepared to adapt as swiftly as possible.

The reason is simple. In such times off change, you know who is leaving, but you never know what is coming.

Angela Merkel Bavarian Elections Bavarian Rule in Greece CDU CSU German Coalition Government Horst Seehofer King Otto SPD Wolfgang Schaeuble 13 Οκτωβρίου 2018 | 18:27
Share
Περισσότερα άρθρα για Αγγλική έκδοση
People want answers, persuasive plans, and arguments Editorial: Maturation
The pandemic and citizens’ fears regarding inflation have shocked households Metron Analysis poll: SYRIZA trails New Democracy, KINAL-PASOK skyrockets
It is imperative for the weapons programme to be implemented immediately Editorial: Arrivals
The charges of the victim garnered attention nationwide Editorial: Support
Greece is a peaceful Western country Editorial: Vigilance
Both SYRIZA and PASOK are in a transitional phase Editorial: Changes
Tsipras posts on the social media and frequently as possible Editorial: Obligations
Universities have become a sort of state within the state Editorial: Enough is enough!
Nobody for whatever reason has the right to beat a professor Editorial: Zero tolerance
The shift in America’s priorities should come as no surprise Editorial: Fluidity
We have the weapons, the experience, and obviously the collective will Editorial: Transcending the pandemic
How do you negotiate with Vladimir Putin? Editorial: Dilemma
Editorial: Phenomenon
Maintaining tensions does not contribute to dialogue or good neighbourly relations Editorial: Pragmatism in Greek-Turkish relations
The alarm bell of daily life is urgently ringing Editorial: Alarm bell