'Macedonia changed its constitution in 1993. We have made a major step towards eradicating irredentism. Whatever we are doing now is to prove that Macedonia has no ambitions, territorial or otherwise,' the FYROM PM said/ 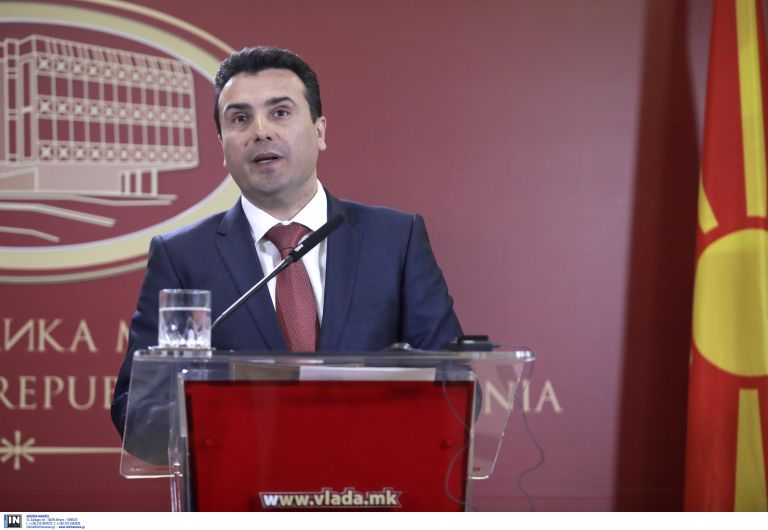 FYROM Prime Minister Zoran Zaev has said that he opposes a revision of the country’s Constitution to remove remaining irredentist elements, as Greece has requested.

“Macedonia changed its constitution in 1993. We have made a major step towards eradicating irredentism. Whatever we are doing now is to prove that Macedonia has no ambitions, territorial or otherwise, that Macedonia does not have irredentist aspirations. Macedonia wants to build friendly relations,” Zaev said.

"I would like the negotiations (with Greece) to succeed ... We are ready for a geographical qualifier in the name," he told reporters.

He had pledged a speedy solution to the dispute last month during the World Economic Forum in Davos.

Most countries refer to the country that declared independence in 1991 from the former Yugoslavia as Macedonia.

Diplomats say Northern Macedonia, New Macedonia or Upper Macedonia could be now acceptable to both sides.

Zaev also said his government has renamed the main airport and a key highway, which had both been named after Alexander the Great. That riled Athens as Macedonia was also the name of the ancient Greek kingdom ruled by Alexander, and most of the geopgraphic area of Macedonia, and most all of the ancient kingdom lies  within Greek territory.

Zaev said the airport will be renamed "International Airport Skopje" and the highway will be called Friendship.
With today's decision ... we are confirming our step towards building friendship and confidence with Greece," he said.

TANEA Team 8 Φεβρουαρίου 2018 | 12:07
Share
Περισσότερα άρθρα για Αγγλική έκδοση
There will be more weather crises in the future Editorial: Deficiencies
This young woman heard the message of other women that preceded her Editorial: Catharsis
Balances with the Russian side are very delicate and must be maintained Editorial: Composure
'Greece is a significant and wise actor in this part of Europe' Kosovo FM Donika Gervalla–Schwarz: ‘We are not begging for recognition from Greece’
People want answers, persuasive plans, and arguments Editorial: Maturation
The pandemic and citizens’ fears regarding inflation have shocked households Metron Analysis poll: SYRIZA trails New Democracy, KINAL-PASOK skyrockets
It is imperative for the weapons programme to be implemented immediately Editorial: Arrivals
The charges of the victim garnered attention nationwide Editorial: Support
Greece is a peaceful Western country Editorial: Vigilance
Both SYRIZA and PASOK are in a transitional phase Editorial: Changes
Tsipras posts on the social media and frequently as possible Editorial: Obligations
Universities have become a sort of state within the state Editorial: Enough is enough!
Nobody for whatever reason has the right to beat a professor Editorial: Zero tolerance
The shift in America’s priorities should come as no surprise Editorial: Fluidity
We have the weapons, the experience, and obviously the collective will Editorial: Transcending the pandemic