The government did everything in its power to limit attendance at the protest, including persuading Archbishop Ieronymos of Athens and All Greece to come out against FYROM protests. 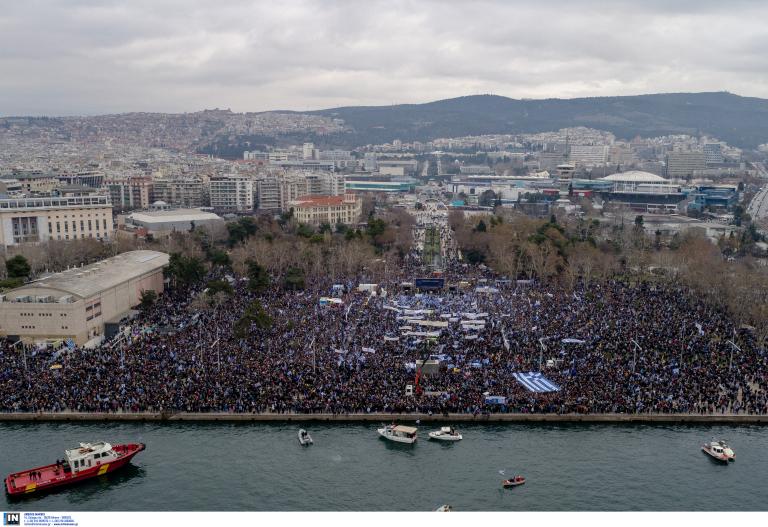 The masses at the four-hour demonstration in Thessaloniki yesterday surpassed all expectations, as at 3pm the organizers announced that an amazing 400,000 protesters from all over Greece had inundated the seafront of the country’s second largest city, but police, which always tends towards very conservative estimates of protest turnouts, put the number at around 90,000.

The protest was intended as a resounding message to the government that it does not have a blank check in negotiating the terms of a settlement with Skopje on what the Former Yugoslav Republic of Macedonia will be called internationally and in its bilateral relations, and on whether Greece’s northern neighbor will be able to claim that they are the keepers of a Macedonian nationality and language, which historically have been core elements of FYROM’s irredentist agenda.

The government did everything in its power to limit attendance at the protest, including persuading Archbishop Ieronymos of Athens and All Greece to come out against FYROM protests and labeling those would participate as fellow travelers of Greece’s neo-fascist Golden Dawn party, which may in the end have produced a boomerang

The event opened with a salutation from Metropolitan bishop Anthimos of Thessaloniki, widely viewed as a nationalist firebrand, and retired Chairman of the Joint Chiefs of Staff, Frangoulis Frangos, who has been touted as the prospective leader of a new right-wing nationalist party, which he denies but does not entirely rule out.

The demonstration was attended by New Democracy and Independent Greeks MPs representing electoral districts in northern Greece, and by Macedonia prefect Apostolos Tzitzikostas, who had challenged Kyriakos Mitsotakis for the New Democracy leadership.

Hundreds of buses from all over Greece descended on the northern capital, with regional clergy having been urged by Anthimos to attend the protest, despite the urgings of Ieronymos, who has no direct authority on local bishoprics around the country.

‘’Demonstrate my Greek Macedonian brothers, on land and sea, toward persons known and unknown, on television and radio, to Europeans and Americans, to Russians and Asians, on the open seas and on the vast expanse of the sky, the great truth, the witness of history, the song of our slain heroes, the psalms of the monasteries, the most true message of history – that Macedonia was and remains the fatherland and cradle of Greeks, and that Macedonia means Greece and Greece means Macedonia,’’ Anthimos declared.

The resolution of the demonstration

Organisers produced a resolution which demanded that the government ‘’preclude any prospect of accepting of the, from most ancient times, name Macedonia and its derivatives’’, and that was approved at the start of the protest.

TANEA Team 22 Ιανουαρίου 2018 | 15:54
Share
Περισσότερα άρθρα για Αγγλική έκδοση
Approximately 160,000 people in Greece today are afflicted with Alzheimer’s disease Editorial: Reminder
Unrepentant, Tsipras unleashed charges against the government and announced handouts Editorial: A return to the past
The country is in great need of stability., not electoral surprises Editorial: Normalcy
The EU’s adjustment of financial rules has facilitated the situation Editorial: Lessons
Editorial: The conundrum of early elections
It is common knowledge that all political parties seek the vote of Greece’s youth Editorial: Greece’s youth
In a democracy, elections cannot serve as a weapon for prime ministers Editorial: The need for electoral stability
Mitsotakis rules out any prospect of political consensus with SYRIZA
Merkel’s statement should lead us collectively to a rethinking of what happened and not reflexive indignation Editorial: The price of imprudent politics
Self-tests, contact tracing key to safe re-opening of schools Spike in COVID-19 cases expected after schools open next week
The repercussions of these illegal actions are not limited to public health Editorial: A threat to society
September has arrived, but the University Protection Groups did not keep the rendezvous Editorial: Rendezvous
Theodorakis exemplified the sacred and mystical marriage of music and poetry The Greek nation bids farewell to beloved composer Mikis Theodorakis
One must be very careful in making choices that will influence the education of future generations Editorial: The time has come for a bold ‘yes’
Hellenic Statistical Service Staikouras for GDP – Strong recovery confirmed