Erdogan unabashedly brandished photos of dead children to create a communications-oriented sensation and place the Greek government on the list of authoritarian regimes. 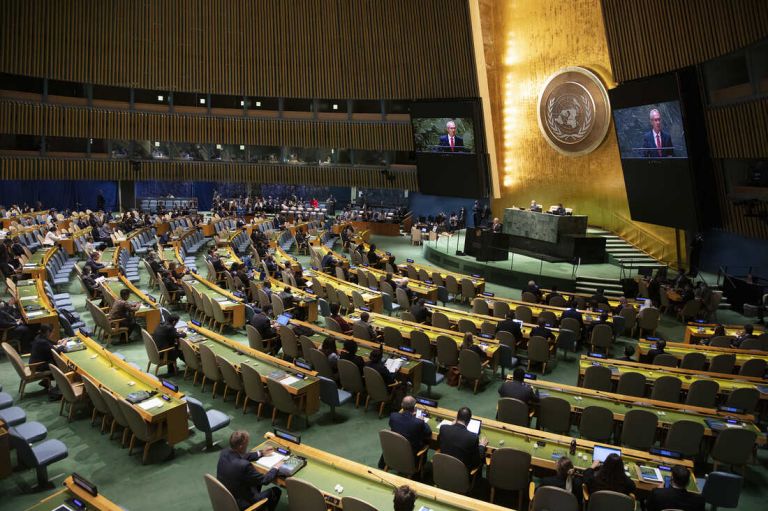 In his address to the UN General Assembly in New York on 20 September, Turkish President Recep Tayyip Erdogan unleashed provocative lies in order to defame Greece.

Prime Minister Kyriakos Mitsotakis’ address to the UN General Assembly, which is scheduled for tomorrow, is only the beginning.

Erdogan unabashedly brandished photos of dead children in order to create a communications-oriented sensation and place the Greek government on the list of authoritarian regimes.

Athens must mobilise immediately, utilising its alliances and partners in an even more intense effort to highlight Turkey’s provocations.

What is needed is an international information campaign to belie, with the facts, what the Turkish president has said about what is going on with refugees in the Aegean.

These facts are not the only card that Greece has at its disposal in rebutting Erdogan’s claims.

Turkey is challenging Greece’s territorial integrity, and the daily, massive number of its fighter jets’ violation of Greece’s airspace, including a large number over Greek islands, demonstrate clearly which country is acting as the neighbourhood bully of the Eastern Mediterranean.

Until now, Turkey wanted to don the role of a bridge between the West and Russia.

At this stage, however, it is playing a destabilising role.

Περισσότερα άρθρα για Αγγλική έκδοση
There are problems that become insufferable as time passes and they fester Editorial: Solving problems in the daily life of citizens
The purpose of dormitories is to house university students Editorial: Confronting loci of violence at universities
The worst-case scenario of a complete cut-off of Russian gas should be put on the table Editorial: Vigilance in handling energy crisis
If the Church does not intervene immediately, the state must Editorial: Cracking down on a priest’s quackery
Erdogan attempted to depict Greece as a rogue state Editorial: Composure in dealing with Turkey
Turkey is conducting a hybrid war that has a distinct communications component Op-ed: A turning point in Turkey’s strategy
Meloni cannot afford to pick a fight with the EU Editorial: Vigilance in safeguarding liberal democracy
In the World Economic Forum Global Gender Gap Index, Iran ranks 140th out of 144 Editorial: Turning point for Iranian women
All the figures indicate that Greece had an exceptional tourist season Editorial: A serious approach to the tourism sector
The future of the British monarchy is not considered as certain as before Editorial: Changes
Graduates of Greek medical schools do not choose to specialise in anaesthesiology Editorial: Health ministry persuasion campaign needed
Tsipras has long been cautiously courting Androulakis Tsipras says he wants to avoid second election with coalition based on ‘progressive’ programme
Vladimir Putin would very much like to secure China’s support Editorial: Geopolitical fronts and poles
The government has devised a plan and has taken certain initiatives Editorial: A mature response to the demographic problem
If elections were to be held sooner, the harm may perhaps have been tempered Editorial: Everything must come to light