Editorial: The bane of toxic politics

Recently, main opposition leader Alexis Tsipras called the PM a Herod who kills children. Yesterday, he declared that the PM has ideological fixations and that he is fanatical and a liar. 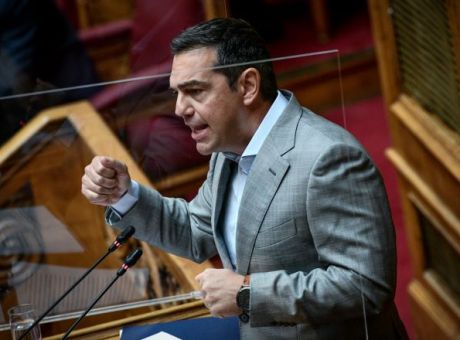 One does not know whether to call it sexism, vulgarity, or infinite idiocy.

What is certain is that the remark of a main opposition SYRIZA cadre about a tennis player on the Greek Olympics team, the prime minister’s son and ERT state-run television is yet another example of toxic political rhetoric that further burdens the political climate.

Before that, a former SYRIZA minister had verbally attacked a current minister based on the idea of the former that he would be more persuasive by using the children of the latter in his argumentation.

For his part, SYRIZA leader Alexis Tsipras has the led the criticism of the prime minister. Recently, he called the PM a Herod who kills children. Yesterday, he declared that the PM has ideological fixations and that he is fanatical and a liar.

He accused the PM of being particularly hostile toward Greece’s youth and charged that he has been blinded by the arrogance of power and cuts deals with private interests.

Leading SYRIZA cadres in this manner demonstrate that they have learned nothing from their defeat in the 2019 general election.

Instead of engaging in self-criticism and trying to contribute to a productive and civilised political competition, they continue to cultivate hatred and polarisation.

Instead of calling to order those who behave improperly and provoke, they themselves engage in personal attacks. Instead of opening new roads they engage in disaster-mongering.

Opinions polls indicate, however, that citizens reject such opposition tactics.

Greek society does not want any more division.

TANEA Team 28 Ιουλίου 2021 | 22:18
Share
Δείτε επίσης
Περισσότερα άρθρα για Αγγλική έκδοση
Editorial: Turning a page
'This is no longer about climate change. This is about addressing a climate crisis.' Mitsotakis focuses on pandemic, climate crisis, and Greek-Turkish relations in UN speech
The head of SYRIZA’s Citizen’s Protection policy section simply followed his party’s mannerism Editorial: Mannerism
The cottage industry of lawsuits against educators constitutes a disruption of social peace Editorial: Decisiveness
For the Ecumenical Patriarchate, which has spiritual authority over the Church in America, Elpidophoros, 54, is the best and the brightest that it has to offer. Tempest in a teapot: The attacks on Archbishop Elpidophoros and foreign policy stunts
US President Joe Biden has chosen a particular mixture of policies Editorial: Doctrines
Approximately 160,000 people in Greece today are afflicted with Alzheimer’s disease Editorial: Reminder
Unrepentant, Tsipras unleashed charges against the government and announced handouts Editorial: A return to the past
The country is in great need of stability., not electoral surprises Editorial: Normalcy
The EU’s adjustment of financial rules has facilitated the situation Editorial: Lessons
Editorial: The conundrum of early elections
It is common knowledge that all political parties seek the vote of Greece’s youth Editorial: Greece’s youth
In a democracy, elections cannot serve as a weapon for prime ministers Editorial: The need for electoral stability
Mitsotakis rules out any prospect of political consensus with SYRIZA
Merkel’s statement should lead us collectively to a rethinking of what happened and not reflexive indignation Editorial: The price of imprudent politics