At this time, the Fire Brigade is being reinforced due to the fact that the flames threaten a residential area, while the first flames reached the houses causing damage. 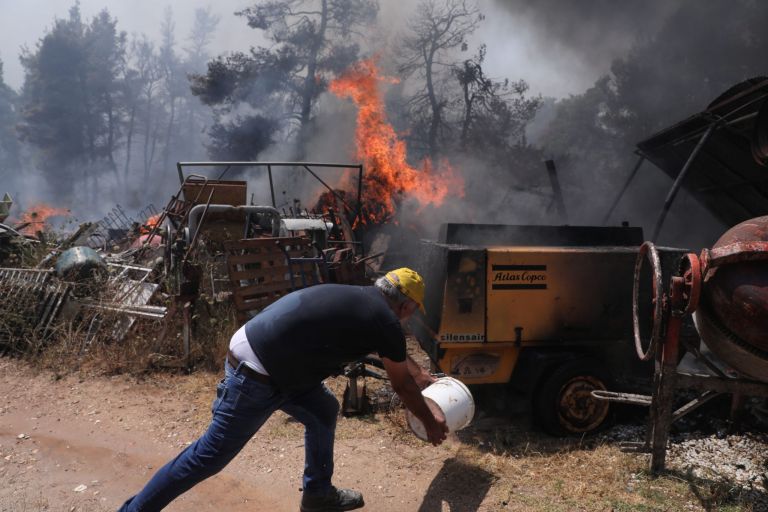 The fire that broke out at noon in the area of ​​Stamata and Rodopolis remains in full swing.

According to information from the Fire Brigade, the fire is currently moving in the area between Rodopolis and Dionysos. There is no single front, but many scattered blazes between buildings.

At this time, the fire brigade is being reinforced due to the fact that the flames threaten a residential area, while the first flames reached houses causing damage.

Residents of the area “see” arson as the cause behind the fire in Stamata.

“My brother heard four gas canisters explode. They have set it on fire,” a resident of the area told MEGA channel.

“I am not an expert to say whether the outbreaks can be justified. Beyond that, there are many outbreaks in the wider area which are not a continuation of a single fire in my mind,” underlined another resident. “It is not possible that Dionysos Avenue has caught fire on both sides,” he added.

“The fronts are scattered, we were waiting for the fire from below towards Dionysos, there were flames above Dionysos, it is not accidental,” said a firefighter.

“There is a lot of fuel from the trees in the winter. We had a fire with multiple outbreaks that raises suspicions. (Governor) Mr. Patoulis mobilized the entire civil protection mechanism. We had some disasters in farmhouses. There is no official record yet. It will start soon. There seem to be losses from burned houses. I have no indication of people trapped. The night is approaching, the winds are strong, I hope that we will not have an unfavorable development “said deputy governor of Attica, Nikos Peppas to MEGA.

TANEA Team 27 Ιουλίου 2021 | 17:41
Share
Περισσότερα άρθρα για Αγγλική έκδοση
Editorial: Turning a page
'This is no longer about climate change. This is about addressing a climate crisis.' Mitsotakis focuses on pandemic, climate crisis, and Greek-Turkish relations in UN speech
The head of SYRIZA’s Citizen’s Protection policy section simply followed his party’s mannerism Editorial: Mannerism
The cottage industry of lawsuits against educators constitutes a disruption of social peace Editorial: Decisiveness
For the Ecumenical Patriarchate, which has spiritual authority over the Church in America, Elpidophoros, 54, is the best and the brightest that it has to offer. Tempest in a teapot: The attacks on Archbishop Elpidophoros and foreign policy stunts
US President Joe Biden has chosen a particular mixture of policies Editorial: Doctrines
Approximately 160,000 people in Greece today are afflicted with Alzheimer’s disease Editorial: Reminder
Unrepentant, Tsipras unleashed charges against the government and announced handouts Editorial: A return to the past
The country is in great need of stability., not electoral surprises Editorial: Normalcy
The EU’s adjustment of financial rules has facilitated the situation Editorial: Lessons
Editorial: The conundrum of early elections
It is common knowledge that all political parties seek the vote of Greece’s youth Editorial: Greece’s youth
In a democracy, elections cannot serve as a weapon for prime ministers Editorial: The need for electoral stability
Mitsotakis rules out any prospect of political consensus with SYRIZA
Merkel’s statement should lead us collectively to a rethinking of what happened and not reflexive indignation Editorial: The price of imprudent politics