Marinakis: «The result was clearly distorted – Dräger was fouled before the goal»

Vangelis Marniakis spoke clearly of a distortion of the result of the Olympiakos – Manchester City match. There was an obvious foul before City’s goal. 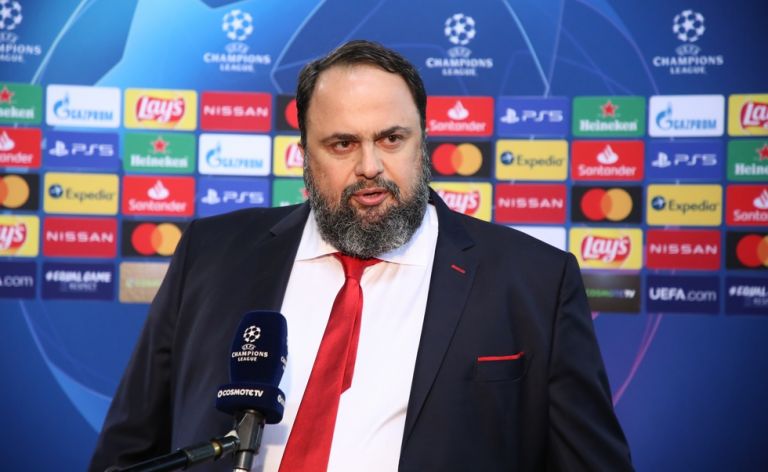 Olympiakos was defeated by a superior Manchester City, but with a goal that shouldn’t have been counted. A goal that in the end determined the match. Vangelis Marinakis spoke of an injustice and a distortion of the results. Moreover, he criticised heavily the VAR referees, who didn’t point the mistake out to ref Masa.

«Despite our absensces, we could have had a better results. Today we had a distortion of the match result: in the first and only goal there was a clear foul, Dräger was hit with the elbow. It’s very easy for the VAR referees to see and inform the referee, if he hadn’t seen it.

It’s not nice when our players give everything in the field and when we could have gotten a good results, to be wronge by the referees for one more time, when they could have seen it in VAR.

I believe we deserved a good result, even though we could have been better in the first half. It’s truly something unfair, we didn’t expect this from the referees.

We move on. Olympiakos can claim two good results to progress onto the next phase. We believe in it, even though we have our problems, with injuries and Covid, but that’s why we are here in Olympiakos: to overcome any difficulties.

We have to beat Aris on Saturday, because our first goal is the league and then we need to go to Marseille and play for the qualification. We have beaten Marseille before and we can do it again.»

TANEA Team 25 Νοεμβρίου 2020 | 23:25
Share
Περισσότερα άρθρα για Αγγλική έκδοση
There will be more weather crises in the future Editorial: Deficiencies
This young woman heard the message of other women that preceded her Editorial: Catharsis
Balances with the Russian side are very delicate and must be maintained Editorial: Composure
'Greece is a significant and wise actor in this part of Europe' Kosovo FM Donika Gervalla–Schwarz: ‘We are not begging for recognition from Greece’
People want answers, persuasive plans, and arguments Editorial: Maturation
The pandemic and citizens’ fears regarding inflation have shocked households Metron Analysis poll: SYRIZA trails New Democracy, KINAL-PASOK skyrockets
It is imperative for the weapons programme to be implemented immediately Editorial: Arrivals
The charges of the victim garnered attention nationwide Editorial: Support
Greece is a peaceful Western country Editorial: Vigilance
Both SYRIZA and PASOK are in a transitional phase Editorial: Changes
Tsipras posts on the social media and frequently as possible Editorial: Obligations
Universities have become a sort of state within the state Editorial: Enough is enough!
Nobody for whatever reason has the right to beat a professor Editorial: Zero tolerance
The shift in America’s priorities should come as no surprise Editorial: Fluidity
We have the weapons, the experience, and obviously the collective will Editorial: Transcending the pandemic