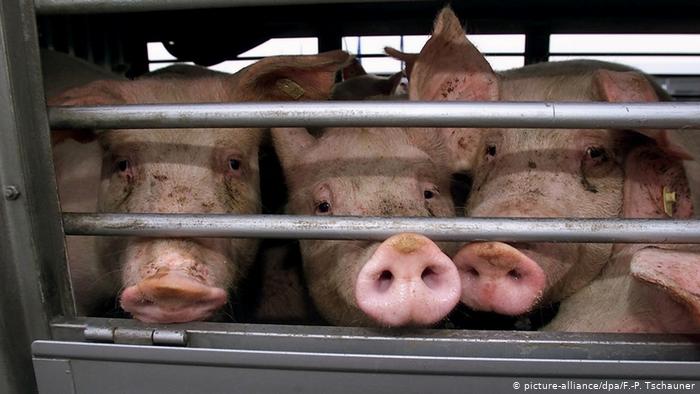 German pig farming is being disrupted by the closure of one of the country’s largest slaughterhouses after a coronavirus outbreak, an industry association said on Friday.
Some 600,000 people in Guetersloh in the western German state of North Rhine-Westphalia were forced back into lockdown on June 23 after more than 1,500 workers at the Toennies slaughterhouse and meat processing plant tested positive for COVID-19.
The Toennies plant in Rheda-Wiedenbrueck in North Rhine-Westphalia normally slaughters and processes between 12% to 14% of Germany’s pigs and is an important part of Germany’s pork industry, the Association of German pig farmers said. A date for the plant’s reopening has not yet been announced.
“Each week of the plant’s closure is forcing about 100,000 pigs to remain on farms even though they are ready to be slaughtered,” said the association. “The pig farmers are the victims of the plant’s closure.”
The outbreak at the meat processing plant has sparked a debate about standards in Germany’s food industry and its reliance on migrant labour, particularly from Romania.
Virus outbreaks at meat packing plants in the United States have also disrupted pig farming.

TANEA Team 3 Ιουλίου 2020 | 11:19
Share
Περισσότερα άρθρα για Αγγλική έκδοση
Unhindered and without external influence, the judiciary must do its duty Editorial: The vindication of #MeToo
AHEPA honors Greek PM Mitsotakis, Cyprus President Anastasiades and shipowner Marinakis during awards ceremony
SΕΤΚΕ: 50% discount for accommodation of members of the Hellenic Nurses Association
Greek society does not want any more division Editorial: The bane of toxic politics
Olympic Games: Lefteris Petrounias is pursuing the first Olympic “repeat” in the still rings after 1972
Fire in Stamata, Rodopoli, and Dionysos: “We heard four gas canisters explode”
Educators will be hired to serve in permanent positions in order 'to establish new, upgraded schools' Editorial: Upgrading
Editorial: Feat
For long overdue town planning reform to succeed, we must all actively cooperate Editorial: We must not forget the Mati disaster
Editorial: The 'most complex' Games
Editorial: Proud
The first Mercure in Greece, opens its doors in Rhodes
Greek-Italian “tourism conflict”
In Turkish-occupied Cyprus, Erdogan unleashed an attack against Prime Minister Kyriakos Mitsotakis Editorial: Erdogan's provocations
'Kosova wants to build on the historic ties between our peoples ' Kosovo PM Albin Kurti: 'We would welcome a decision by Greece to recognise Kosovo’s independence'