In effect, with the pretext of protecting the rights of veterans the clarification asserts clearly the existence of a Macedonian ethnicity (Macedonian people) and indeed liberation struggles that sought to unify the entire geographic area of Macedonia. 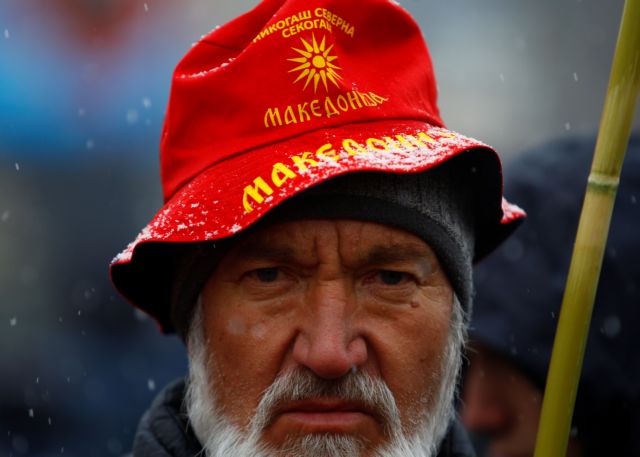 Amidst virulent recriminations between SYRIZA and main opposition New Democracy in Parliament during debate on the confidence vote on the evening of 16 June, Prime Minister Alexis Tsipras announced that Athens has received from Skopje the requisite Note Verbale that begins the countdown for the ratification of the Prespa Agreement by Greece.

Tsipras maintained that the clarifications of certain constitutional amendments passed by Skopje in accord with the agreement put to rest fears that the agreement recognises a “Macedonian ethnicity”, as New Democracy leader Kyriakos Mitsotakis claims.

“The (foreign) ministry (of the Former Yugoslav Republic of Macedonia) further notes that in accordance with the letter and the spirit of the agreement, it is understood that the term “nationality” of the Second Party (FYROM) defined in Article 1 (3) (b), of the Agreement as “Macedonian/Citizen of the Republic of North Macedonia” refers exclusively to the citizenship and does not define or pre-determine ethnic affiliation/ethnicity”.

The text also notes that “the ‘Macedonian language’ refers to the official language of the Second Party (FYROM) as recognised by the Third UN Conference on the Standardisation of Geographical Names held in Athens in 1977, which is within the group of South Slavic languages.”

The six-page note verbale includes the four amendments to the Constitution of FYROM (XXXIII, XXXIV, XXXV, XXXVI) that have been agreed to in the Prespa Agreement and key interpretive clarifications.

The first of the amendments (XXXIII) is crucial as it stipulates that any reference in the Constitution to the “Republic of Macedonia” will be changed to “Republic of North Macedonia”.

However, it exempts and retains the reference to plain Macedonia in Article 36 of the Constitution which refers to the social rights of veterans of the “Anti-Fascist Struggle” and all struggles of the “Macedonian Liberation Wars”, “for war handicapped and all those who were persecuted or jailed for the ideals of a distinct identity of the Macedonian people and Macedonian identy.”

In effect, with the pretext of protecting the rights of veterans the clarification asserts clearly the existence of a Macedonian ethnicity (Macedonian people) and indeed liberation struggles that sought to unify the entire geographic area of Macedonia, including the ancient and largest party which is now part of the Greek state.

Amendment XXXIV amends the Preamble of the Constitution in such a manner as not to depict “the Macedonian people”as above the country’s many ethnic communities –Albanian, Turkish, Vlach, Serbian, Roma, and Bosnian.

There is a citation of the decisions of the Anti-fascist Assembly for the National Liberation of Macedonia, the underpinning of which was the concept of Macedonian ethnicity and a yearning for the acquisition of Aegean Macedonia, the largest part which is in Greece.

It describes the legal decisions referring to the declaration of the first Assembly to the people of Macedonia.

A reference to those who expressed the will to create and independent sovereign state will be added.

Effectively, by referring to the legal decisions of the Assembly, Skopje is suggesting that the amendment refers only to the establishment of the Republic and not to the irredentist claims to what the Slavo-Macedonians historically described as “Macedonia of the Aegean”.

So too there is a reference to the Ohrid Agreememt which recognised Albanian as an official language, laid the groundwork for recognising over a dozen basic rights of the Albanian minority, and stopped a budding civil war, with the attacks of the well-armed Albanian National Liberation Army (NLA), which was about to tear the country apart.

Another key amendment (XXXV) strengthens the denunciation of traditional irredentism with the declaration that Skopje respects the sovereignty, territorial integrity and political independence of neighbouring countries.

That replaces the current more restrictive declaration that Skopje simply has no territorial claims vis a vis neighbouring countries.

It would appear, however, that the reference to the “Macedonian people” abroad constitutes recognition of a “Macedonian” ethnicity.

The fact that the six groups to be protected are referred to by their ethnicity and not as “Macedonians” makes it perfectly clear that the phrase “Macedonian people” refers directly to ethnicity.

Ζέτα Δούκα: Δείτε τι έκανε μαζί με την κόρη της
TANEA Team 18 Ιανουαρίου 2019 | 15:40
Δείτε επίσης
Περισσότερα άρθρα για Αγγλική έκδοση
In the economy words can help shape the climate but deeds yield results Editorial: Profile
Democracy has a duty to defend itself Editorial: Adventure
Editorial: Pillar
Editorial: Crisis
Government and opposition are skirmishing over the rubble in Mati Editorial: Duty
As it turned out Mega was too big to die Editorial: The return of Mega Channel
The government cannot address the problem of school violence on its own Editorial: Wave of violence
Job creation is the overarching aim so that society can prosper Editorial: Automatic pilot
Right now there must be delicate diplomatic manoeuvres abroad and a solid front domestically Editorial: Consensus
Editorial: Delusions
Editorial: Readiness
It seems that freedom of speech cannot be taken for granted in our country Editorial: Fascism
At last it seems that reason is prevailing over belief and superstition about vaccines Editorial: Sirens
Dialogue must continue to be a basic pillar of Greek foreign policy Editorial: Dialogue
SYRIZA links Oruc Reis incident to Turkey's disputation of Greek sovereignty over Aegean islets