Though foreign embassies rarely involve themselves publicly in domestic affairs, it is clear that SYRIZA has many reasons to be pleased by their treatment of the government. 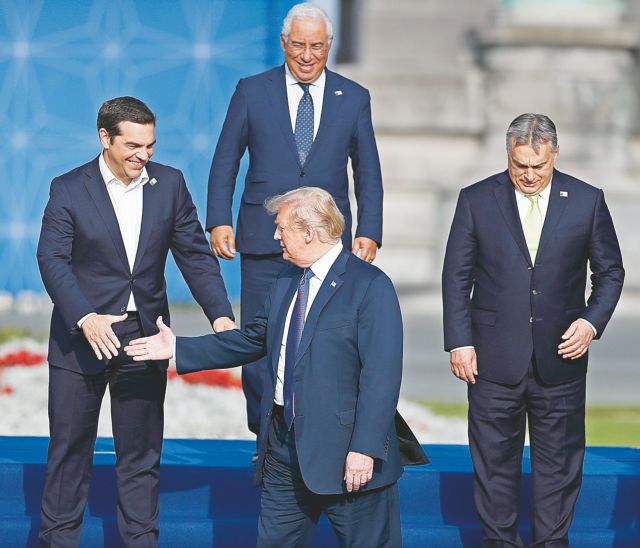 Diplomatic sources say that most embassies expect that it will come in May, when voters must choose local government officials (prefects, mayors and city councilors) and European Parliament Members.

The interior ministry is already running checks on electronic systems and is purchasing ballot boxes. It is also reviewing procedures that will limit delays as votes will be cast in at least three separate ballots (four if the general election is added.

Privately however, many foreign diplomats see a strong possibility of snap polls in March, as the “looser” vote in less polarised prefectural, local, and European Parliament Elections may have a decisive impact on voters’ choices in the general election, in which a substantial segment of SYRIZA’s base might choose to vote for smaller parties.

The Prime Minister’s advisors reportedly believe that they can intensify the climate of polarisation – which normally benefits the two largest parties and often crushes smaller ones – so as to effectively rally SYRIZA’s electoral base, which is much less consolidated than New Democracy’s at the moment.

Though foreign embassies rarely involve themselves publicly in domestic affairs, it is clear that SYRIZA has many reasons to be pleased by their treatment of the government.

Most notably, the American Embassy has been exceptionally friendly toward the current government, especially during the last two years, with Prime Minister Alexis Tsipras’ turn toward Washington.

However, it appears that there is a growing diplomatic consensus that the general election should be held sooner rather than later, so as to clear up the rather murky political and economic terrain.

Naturally, embassies in Athens are planning ahead for all eventualities in the post-election political scene, so as to avert political instability and to do what they can to support the new government, encouraging a long-term economic and investment plan that can ensure a climate favourable for foreign investment.

Though most believe no party will garner the percentage of the vote required to clinch a parliamentary majority (around 38 percent), so as not to depend on fragile political coalitions, they are concerned about the prospect that a lack of consensus in the election of the President of the Republic in 2020 by parliament could lead to the constitutionally mandated dissolution of the parliament and yet another general election.

For foreign investors and political players, a second general election in 2020 is the worst possible development, due to the accompanying political, and consequently economic instability.

A key concern for internationals is the prospect of a fiscal derailment, which would jeopardise the entire economic stabilisation project and naturally the investment climate.

In that context, the key foreign players in Greece have begun to discuss which politicians as President could play the role of peacemaker in the furious clashes between SYRIZA and main opposition New Democracy. The objective is to achieve a consensus that will secure the broad parliamentary majority required in the election of the President.

The issue is of particular concern for ND leader Kyriakos Mitsotakis, who appears in all polls to be headed toward a victory over SYRIZA with a margin of at least ten percentage points.

TANEA Team 26 Δεκεμβρίου 2018 | 16:13
Share
Δείτε επίσης
Περισσότερα άρθρα για Αγγλική έκδοση
In times of tensions military service is viewed as a national duty Editorial: Incentives for early military service
An emotional start in taking a position on developments in the region would be catastrophic Editorial: A measured response to Israeli-Palestinian conflict
The alternate interior minister said problems with COVID-19 self-tests will be resolved by the end of May Government poised to abolish mandatory SMD to leave home, working to solve self-test problems
If Syriza believes it can garner political gains with daily political transformations it is sorely mistaken Editorial: Political vertigo
Santander Consumer Finance begins activities in Greece
Evangelos Marinakis: Post-Covid Shipping and the Environment – Green Energy Investments
The US ambassador says Biden has “opened up a new vocabulary of cooperation” with Greece Pyatt see deeper US-Greece strategic ties under Biden administration
The case will be re-tried in the framework now set by the Council of State Bombshell Council of State ruling accepts state’s vaccine side-effect liability
May Day should be honoured with a single march each year Editorial: Unity
Transcending the collective crisis will require leadership and not troublemakers Editorial: Messages
After a six-month shutdown, workers in the restaurant business laid the tables Editorial: The first step
The government has repeatedly said that the existing framework is outdated Battle royal looms over government bill overhauling labour relations, limiting strike action
The labour trade union movement is an invaluable and irreplaceable weapon of workers An urgent need for the rebirth of the trade union movement
Editorial: The pendulum of American politics
The thirty-somethings rushed to be vaccinated for the sake of their families and their friends Editorial: Front-and-centre