It is inconceivable for a minister whose portfolio is unrelated to foreign affairs to set a foreign policy different than that of the government, or to issue invitations and hand over cities to become foreign bases. 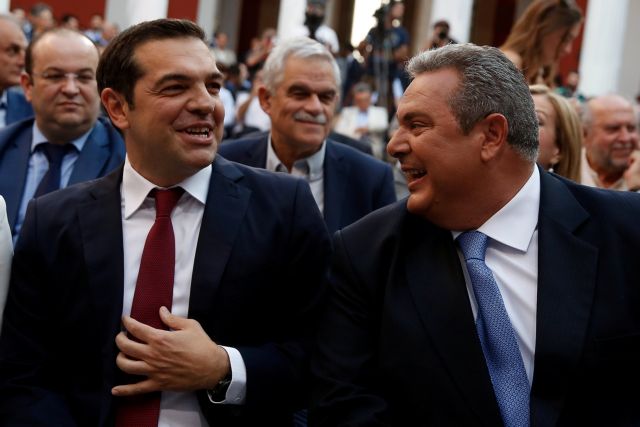 The prime minister and his junior coalition partner are mistaken if they believe that their power games concern only themselves or their inner circle.

By playing games from the position of responsibility that they hold, they are playing with the country’s fortunes.

At this difficult crossroad, they are obliged to take their decisions as soon as possible.

There are many choices. Either the functionality of the government to the level required to govern the country will be restored, or Prime Minister Alexis Tsipras and Defence Minister Panos Kammenos will relieve the country of their presence.

It is inconceivable for a minister whose portfolio is unrelated to foreign affairs to set a foreign policy different than that of the government, or to issue invitations and hand over cities to become foreign bases.

It is impermissible for anyone’s personal agenda to override national interests. It is inconceivable for the government to give the impression of mutual backstabbing and, in the final analysis, of an absolute breakdown.

The prime minister bears a huge responsibility in this regard. A government is not a coterie or a school trip. It is not a café discussion or a street brawl.

A government must be responsible. If the PM cannot control his ministers, then there is only one solution.

Governments in a state of collapse should collapse as soon as possible, because the danger of driving the country to collapse is enormous.

TANEA Team 12 Οκτωβρίου 2018 | 13:55
Share
Δείτε επίσης
Περισσότερα άρθρα για Αγγλική έκδοση
Greece’s role as an energy hub must be emphasised Editorial: Opportunities
Mitsotakis-Biden talks: Greek-Turkish relations, the war in Ukraine, wayward Turkey’s new role in NATO
It is not in Greece’s interest for Turkey to be isolated or humiliated Editorial: Opportunity
The Marshall Plan prioritised rebuilding export capacity How should a Marshall Plan for Ukraine work?
Drop in COVID-19 deaths - number of infections, intubated patients stable, hospital admissions rise
Policing of universities is an unpleasant but necessary measure Editorial: No excuse
A strict price inspections policy is needed to curb untrammelled price hikes Editorial: Dealing with inflation
Editorial: Axes
Ta Nea has repeatedly called for decisive action Editorial: University police force plan on the back burner
Everything depends on how the social media are used Editorial: Words
SYRIZA’s gains in 2012 were a Pyrrhic victory. Editorial: Populism
There will be a 600 euro cap on the rebate Amidst uproar over skyrocketing energy costs, Mitsotakis announces rebates for households
This is the 12th anniversary of the deadly arson attack Editorial: Radio silence
Many cases involving extremely serious crimes have not been tried Editorial: A bitter political legacy
EODY has recorded a total of 3.34mn COVID-19 infections EODY: 32 COVID-related deaths, over 8,000 infections, 660 reinfections, 231 intubated patients