Injuries were suffered by 156 adults, of which 11 are on life support in hospital. Sixteen children were hospitalised, but their lives are not in danger. 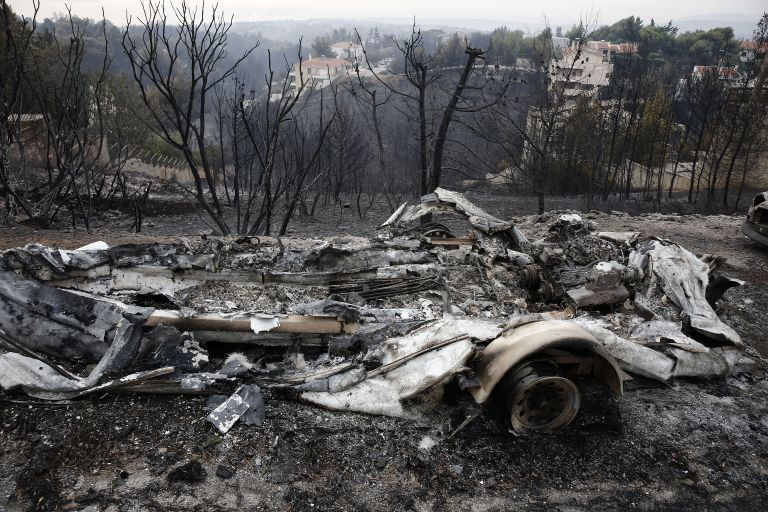 There are at least 60 dead from the wildfires at this time.

The spokesperson for the Greek Fire Service, Stavroula Malliri, said that, “In continuation of the last briefing on yesterday’s disastrous wildfires, and according to the last official data, unfortunately the number of dead is increasing, as on a plot of land in the Zougla area of Mati, the corpses of 25 individuals were found. The death toll until now is 49. Injuries were suffered by 156 adults, of which 11 are on life support in hospital. Sixteen children were hospitalised, but their lives are not endangered.”

“Despite the immediate and large mobilisation of the forces of the fire service, the increased intensity of the winds, which reached 9 on the Beaufort scale, as well as the rapidity of the spread of the wildfire, led it to immediately extend to housing areas.

Residents and visitors to the area were not able to escape in time, even though they were a few metres from the sea, or in their cars. From 6am yesterday until 6am today, there were 47 agro-forest wildfires nationwide. Most were handled immediately in the initial stages,” Malliri said.

Malliri listed the wildfires that are still in progress.

Regarding the application to the EU’s Civil Protection Mechanism, Cyprus will send 60 firefighters and Spain will provide two firefighting aircraft, which will be transported on an Air Force C130 aircraft.

The fire service is calling on the relatives of missing persons to call the telephone number 199, to report the individuals they are looking for and to provide the necessary information. As of midday today, the number of missing persons had not been determined.

Aside from Greek Police and the Fire Service, who are scouring various areas for missing person, Coast Guard vessels and underwater Coast Guard diving teams are involved in the operation. This morning, a Coast Guard helicopter spotted the corpse of a man at sea in the area of Artemida, and the body was taken by lifeboat to the port of Rafina.

The Rafina port authority announced that all scheduled ship arrivals and departures will operate regularly, and that there is normal access to the port.

In addition, suburban railway schedules from Athens-Kiato and Kiato-Athens have been restored.

There are still traffic detours on Marathonos avenue, at the juncture of Kyani Aktis Street, and on Kyanis Aktis, from the juncture with Poseidonos Street, going towards Mati.

The areas that were hit from Kinetta and Eastern Attica resemble a waste land. Many homes and automobiles were consumed by the flames.

A number of people who were working when the fire broke out attempted in vain to approach their homes, in which their relatives were located.

Some repaired to the nearest beaches, but there, too, they were trapped by the flames, and in many cases Coast Guard vessels were needed to transport them to safe places.

There was confusion over the case of a group of Danish tourists whose traces were lost yesterday afternoon in the seaside area of Eastern Attica. They had told a friend in Denmark that due to the fire they boarded a boat, and there was a search to find them.

Nine of the Danes were spotted and saved by a passenger ship and a Navy frigate, but later it was said that there were 13people on the boat.

The search continues for those missing persons by 10 Coast Guard vessels, the frigate “Elli”, a Coast Guard helicopter, and other vessels.

TANEA Team 24 Ιουλίου 2018 | 13:59
Share
Περισσότερα άρθρα για Αγγλική έκδοση
Greece is a peaceful Western country Editorial: Vigilance
Both SYRIZA and PASOK are in a transitional phase Editorial: Changes
Tsipras posts on the social media and frequently as possible Editorial: Obligations
Universities have become a sort of state within the state Editorial: Enough is enough!
Nobody for whatever reason has the right to beat a professor Editorial: Zero tolerance
The shift in America’s priorities should come as no surprise Editorial: Fluidity
We have the weapons, the experience, and obviously the collective will Editorial: Transcending the pandemic
How do you negotiate with Vladimir Putin? Editorial: Dilemma
Editorial: Phenomenon
Maintaining tensions does not contribute to dialogue or good neighbourly relations Editorial: Pragmatism in Greek-Turkish relations
The alarm bell of daily life is urgently ringing Editorial: Alarm bell
We believe that the projections of scientists are exaggerated. They are not. Editorial: Living dangerously
It is up to us to exit the pandemic on our feet Editorial: Caution
The cost of a total lockdown would be very high for the economy Editorial: The need for personal responsibility, again
Banks – They secure short-term loans to provide new ones