Samaras accuses Tsipras in lawsuit of masterminding plot to slander him

The former conservative prime minister accuses PM Tsipras of conspiring with prosecutor, minister, and protected witnesses of setting up slanderous plot to accuse him of taking kickbacks from Novartis. 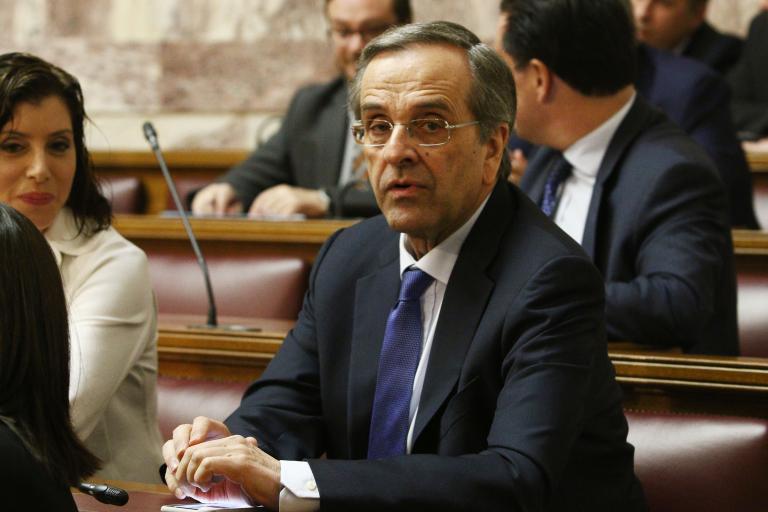 In an unprecedented move, ex-PM Antonis Samaras has filed a lawsuit against Prime Minister Alexis Tsipras, Corruption Prosecutor Eleni Touloupaki, Alternate Justice Minister Dimitris Papangelopoulos, and the two protected witnesses in the Novartis kickbacks investigation, alleging that they set up a criminal organisation with the aim of slanderously implicating him in the Novartis kickbacks scandal.

In a televised statement, Samaras said that the sitting prime minister is responsible for “setting up a miserable plot” that is “so poorly designed that it collapses without further ado”, and that the “it is patently obvious that the allegations are slanderous”.

Samaras claimed that the plot was so hasty that it was carried out the day after the huge Macedonian naming protest.
“At a moment that Greece is confronted with great challenges and threats, they are attempting with lies to malign their opponents and divide the Greek people. The only way not to play the game of the mudslingers is to put them on trial and to prove their plot.

TANEA Team 15 Φεβρουαρίου 2018 | 23:43
Share
Περισσότερα άρθρα για Αγγλική έκδοση
Mitsotakis underlined Greece’s crucial geostrategic position PM Kyriakos Mitsotakis’ historic speech to Joint Session of US Congress (full text)
A party without self-criticism and renewal cannot move forward Editorial: Political parties transforming
Greece’s role as an energy hub must be emphasised Editorial: Opportunities
Mitsotakis-Biden talks: Greek-Turkish relations, the war in Ukraine, wayward Turkey’s new role in NATO
It is not in Greece’s interest for Turkey to be isolated or humiliated Editorial: Opportunity
The Marshall Plan prioritised rebuilding export capacity How should a Marshall Plan for Ukraine work?
Drop in COVID-19 deaths - number of infections, intubated patients stable, hospital admissions rise
Policing of universities is an unpleasant but necessary measure Editorial: No excuse
A strict price inspections policy is needed to curb untrammelled price hikes Editorial: Dealing with inflation
Editorial: Axes
Ta Nea has repeatedly called for decisive action Editorial: University police force plan on the back burner
Everything depends on how the social media are used Editorial: Words
SYRIZA’s gains in 2012 were a Pyrrhic victory. Editorial: Populism
There will be a 600 euro cap on the rebate Amidst uproar over skyrocketing energy costs, Mitsotakis announces rebates for households
This is the 12th anniversary of the deadly arson attack Editorial: Radio silence