Prime Minister Alexis Tsipras in a speech today asked his parliamentary group to vote for a parliamentary preliminary criminal investigation regarding allegations of politicians receiving kickbacks in the Novartis scandal, and he blasted previous New Democracy and Pasok governments for nurturing a climate of corruption. 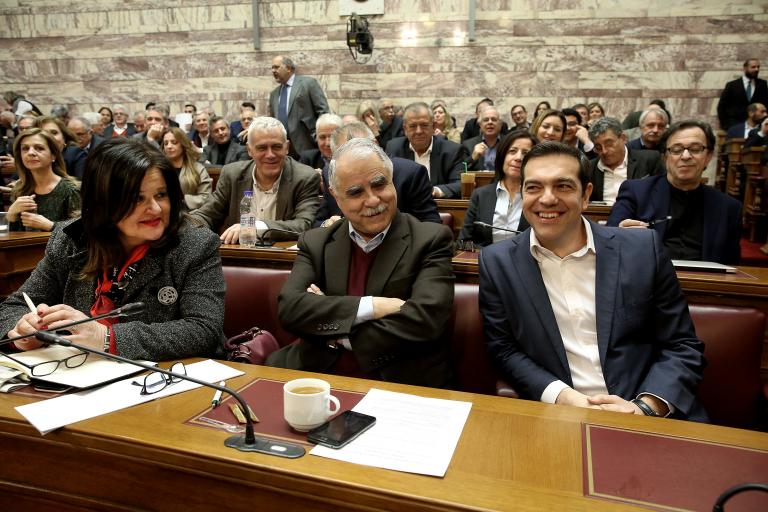 Prime Minister Alexis Tsipras in a speech today asked his parliamentary group to vote for a parliamentary preliminary criminal investigation regarding allegations of politicians receiving kickbacks in the Novartis scandal, and he blasted previous New Democracy and Pasok governments for nurturing a climate of corruption.

“The country was thrown against the rocks due to practices of mismanagement of public funds, and a pervasive political culture of tolerance for corruption, which prevailed for years in the country,” he said, speaking further of moral decline and the degradation of the entire political system.

“There was not a single scandal revealed without cries of political prosecution,” he said, replying to New Democracy’s charges that the PM seeks to annihilate his political opponents through the Novartis scandal, which he said is documented in hefty judicial files.

“Nothing should remain hidden, nothing swept under the rug, but without excesses and without witch hunts, without popular courts.” he said, asserting that the aim of annihilating political opponents is alien to the left-wing.
“As long as some speak of plots and of being set up, they offend the judiciary itself and prosecutors,” the PM said.

23 bn euros lost over a decade from drug pricing rackets

Quite a few billions of euros were lost due to the Novartis affair, and drugs overpricing between 2000-2010 led to 23 billion euros in losses, according to preliminary calculations, the PM asserted, without referring to any particular audit. He said that if that money had been saved, the bailout memorandums may have been unnecessary.

Tsipras said Greece will exhaust all its domestic and international legal tools to sue Novartis for the huge losses to the public coffers from Novartis’ business practices. “We will avail ourselves of every possibility in domestic and international law to take back even the very last euro that they stole from the Greek people,” the PM declared.
Only in the case of crimes committed by sitting ministers is there a brief statute of limitations, the PM said, whereas all other crimes can prosecuted at least for the ensuing 15 years.

Tsipras unleashed a frontal attack on main opposition leader Kyriakos Mitsotakis and his party, charging that, “They have launched an operation of scaring, threatening, and blackmailing witnesses, the competent prosecutors, and the Greek justice system.”

“Publicly, openly, unabashedly they are supplanting political practice with para-state practices, talk of hoods and scare operations. What connection does today’s New Democracy with its civil war-type rhetoric, its undermining lack of measure, and its divisive policy line, with the (traditional) conservative party of order, lawfulness, and the democratic strictness of the popular right envisioned by its founder (the late Constantine Karamanlis),” the PM declared, once again driving a wedge between New Democracy’s traditional and more right-wing factions.

“Let him (Mitsotakis) name names to show who set up the plot that he invokes,” the PM said.

TANEA Team 12 Φεβρουαρίου 2018 | 17:03
Share
Περισσότερα άρθρα για Αγγλική έκδοση
The charges of the victim garnered attention nationwide Editorial: Support
Greece is a peaceful Western country Editorial: Vigilance
Both SYRIZA and PASOK are in a transitional phase Editorial: Changes
Tsipras posts on the social media and frequently as possible Editorial: Obligations
Universities have become a sort of state within the state Editorial: Enough is enough!
Nobody for whatever reason has the right to beat a professor Editorial: Zero tolerance
The shift in America’s priorities should come as no surprise Editorial: Fluidity
We have the weapons, the experience, and obviously the collective will Editorial: Transcending the pandemic
How do you negotiate with Vladimir Putin? Editorial: Dilemma
Editorial: Phenomenon
Maintaining tensions does not contribute to dialogue or good neighbourly relations Editorial: Pragmatism in Greek-Turkish relations
The alarm bell of daily life is urgently ringing Editorial: Alarm bell
We believe that the projections of scientists are exaggerated. They are not. Editorial: Living dangerously
It is up to us to exit the pandemic on our feet Editorial: Caution
The cost of a total lockdown would be very high for the economy Editorial: The need for personal responsibility, again