Clattenburg, one of the most famous referees of the past two decades to emerge from the UK, confirmed the non-existence of a “penalty” awarded to AEK Athens in the first half of its Super League championship match with Aris Thessaloniki by local ref Aristotelis Diamantopoulos. The outlandish call allowed the home team to take a 2-0 lead going into halftime 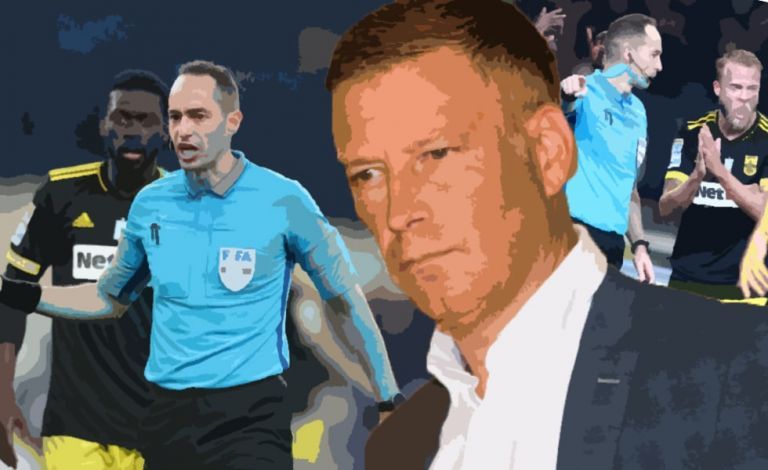 Mark Clattenburg, the head of officiating for Hellenic Football Federation (EPO), the governing body of football in Greece, merely confirmed the very obvious after the eighth week of play in Greece’s Super League.

Clattenburg, one of the most famous referees of the past two decades to emerge from the UK, confirmed the non-existence of a “penalty” awarded to AEK Athens in the first half of its Super League championship match with Aris Thessaloniki by local ref Aristotelis Diamantopoulos. The outlandish call allowed the home team to take a 2-0 lead going into halftime.

Subscriber TV viewers again and again, often in slow motion, watched AEK midfielder Petros Mantalos taking a “dive” when barely touched in the penalty area. Aris center back Jakub Brabec made no violation, he merely and unfortunately running next to Mantalos, when the latter “collapsed”.

Clattenburg’s public statements afterwards disputing the call, however, doesn’t mean that “all’s well, that ends well”, or, “not well”, in this case.

AEK Athens picked up the win at home against a very tough Aris side, coming away with the three points.

These aren’t friendlies though; a pro championship is underway. The Athens side now has 19 points in eight matches. It would have stayed at 17 points, with a tie, had the Greek ref not fulfilled the role of a “12th man” on AEK’s starting lineup.

Nevertheless, this wasn’t the first time Dimitris Melissanidis’ team has been the beneficiary of a mistaken officiating call this season. By conservative estimates, half the games (four) played by AEK this season, and by coincidence, all at its home pitch – the Athens Olympic Stadium (OAKA) – have been tarnished by outrageous calls benefiting the home side and elevating it in the standings.

Yet the visiting team, Ionikos, didn’t give up, creating four opportunities to score up until the 28th minute. The pressure ended in the 33rd minute, however. That’s when a routine foul in the midfield resulted in a second yellow card for Ionikos midfielder Alaixys Romao, shown by referee Giorgos Tzovaras.

How the game would have shaped up with an Ionikos side playing with 11 players is anyone’s guess.

In the third week of play, AEK hosted Lamia, with the game very competitive. AEK scored first in the 67th minute with Argentine striker Sergio Araujo.

Yet in the 84th minute, when Lamia’s Tasos Karamanos was knocked down with the ball in the penalty area by Yevhen Shakhov, referee Spyros Zabalas was apparently distracted. Strangely, “star referee” Tasos Sidiropoulos, watching from the special VAR booth, also couldn’t locate the violation.

As such, another two points – in other words, the win – were safely tucked away in AEK’s corner.

Fast forward to the sixth week of play, when AEK hosted Atromitos Athens, replete with a new coach on its bench, Argyris Giannikis.

The final score was 3-0 in favor of the home side, yet things could have turned out differently had referee Yannis Papadopoulos called a clear-cut penalty committed by left back Larazos Rota against Atromitos striker Victor Klonaridis in the 17th minute.

Clattenburg again, at the time, pointed to the erroneous call. A chance coincidence? The VAR ref in this case was none other than “top-billed” Tasos Sidiropoulos.

With AEK up 1-0, a second penalty for Atromitos was ignored, with Rota again felling an Atromitos forward in the penalty area.

From a possible 0-1 or 1-2, the match ended 3-0, with the referee and the VAR official failing to see the obvious violations.

As it stands, AEK now has four successive victories in a same number of games at its OAKA home field, which means 12 of the 19 points picked up in the 2021-2022 season. However, the perfect tally has been tainted in all four matches by botched calls by the referees and “near-sightedness” by the official in the VAR booth.

The 12-point collection could have easily dropped to six, or less, meaning that AEK would now be under PAOK Thessaloniki, Volos and Panathinaikos Athens in the standings.

Even the two officiating mistakes Clattenburg has publicly cited account for four or five points, a clear indication of “corrupting” the country’s premier football championship.

TANEA Team 3 Νοεμβρίου 2021 | 23:41
Share
Περισσότερα άρθρα για Αγγλική έκδοση
A coarse opposition stance is ill-advised Editorial: Seriousness
We have the weapons. We have fine scientists. We have the experience. We can. Editorial: Urgency
There were delays and tragic omissions in offering proper services to patients Positive Voice in a rough terrain: A look back at the history of HIV/AIDS in Greece
Greece has a multi-faceted policy in its foreign relations and that is how it should continue Editorial: Sobriety in foreign relations
We see irresponsible behaviours and an attitude that the virus is no longer with us Editorial: Behaviours
The virus recognises no geographical borders Editorial: Nobody is safe
Delays and foot-dragging have long led even to the denial of justice Editorial: Expediting justice
Erdogan’s insistence on keeping interest rates low led him to fire three central bankers Editorial: Turkey’s lonesomeness
Turkey traditionally exports its domestic crises Editorial: Turkey's domestic, foreign crises
Nobody has the right to deny their share of responsibility in the common effort Editorial: Joining forces to confront the pandemic
Of intubated patients, 83 percent are unvaccinated or partially vaccinated EODY: 105 COVID-19 deaths, 7,287 infections confirmed in the last 24 hours, 608 intubated
We must continue to insist that the state is obliged to be citizen-friendly Editorial: 'Guinness World Record'
Behind Lukashenko stands Putin, who backs and assists him Editorial: European sovereignty
The pandemic is an issue of life and death, and the protection of public health is a common aim Editorial: Consensus on managing the pandemic, even at the last minute
The measures announced are tantamount to an at least partial lockdown on the unvaccinated Mitsotakis announces partial lockdown on unvaccinated citizizens, tougher enforcement