Religion, rights, and geopolitics on Vartholemos' US visit, meetings with Biden, Blinken, Pelosi

The meetings with American officials come at a time that US-Turkish relations are at rock bottom and when the Ecumenical Patriarchate has suffered the attacks of the Russian Church and the Kremlin. 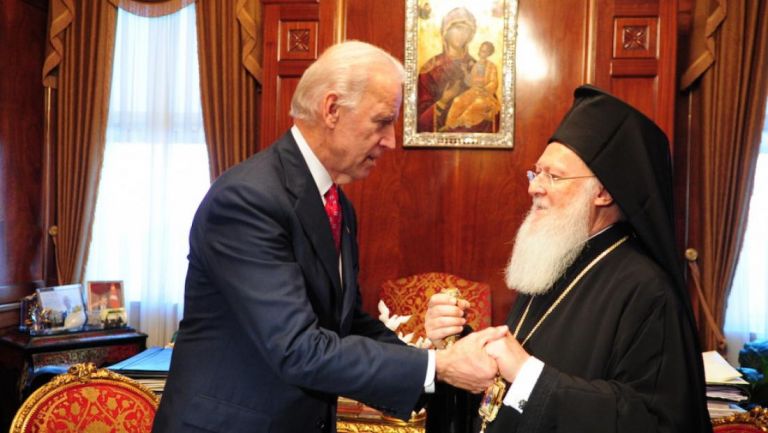 When Greek Orthodox Archbishop Athenagoras of America was elected Ecumenical Patriarch - the first among equals with a coordinating role in Eastern Orthodox Church, which is said to have 300 million faithful worldwide) - in 1948, he travelled to Istanbul, Turkey, for his enthronement on the presidential aeroplane of US President Harry Truman.

The gesture of the US president in the Cold War era was perhaps the most symbolic indication of the strong backing from Washington that the patriarchate has always enjoyed and counted on in grappling with a most often hostile environment.

Both then and now, aside from concerns regarding religious freedom, the Patriarchate of Constantinople, due its age-old primacy, has been viewed as an embattled bastion against the political instrumentalisation by the Kremlin and the expansionism of the Russian Orthodox Church.

Yesterday, when Ecumenical Patriarch Vartholomeos stepped off a private jet and was welcomed by the State Department’s Chief of protocol at Andrews Airforce Base in Maryland, he embarked on a ten 12-day trip that will combine pastoral visits in the Greek Orthodox Archdiocese of America (the largest, most prosperous, and politically influential church under his jurisdiction, which is in the midst of an administrative restructuring) with talks at the highest level of the US administration and Congress.

He is to meet with US President Joe Biden tomorrow in the Oval Office, as well as with Secretary of State Antony Blinken, House Speaker Nancy Pelosi, and US Senators that have been steadfast supporters of the Patriarchate on issues ranging from violations of its religious freedom in Turkey to the actions of the Patriarchate of Moscow.

Over the last two years, with the overt backing and verbal attacks on Vartholomeos of Russian President Vladimir Putin, the Moscow Patriarchate has effectively declared war on the Ecumenical Patriarchate and has cut off communion, disputing its primacy and its canonical coordinating role among all the other independent Churches in Eastern Orthodoxy.

Before his election as US President, Biden  in the past visited Vartholomeos at the Patriarchate's headquarters in the Phanar, Istanbul (photo).

Until the 1054 Great Schism between the Churches of Rome and Constantinople, the Ecumenical Patriarch was the second-ranking bishop in Christendom, and were the Churches to be re-united that would remain the hierarchy.

The first step toward dialogue between the two Churches was taken in 1964 by Pope Paul VI and Ecumenical Patriarch Athenagoras, when they met in Jerusalem, embracing and exchanging the kiss of peace.

"May this meeting of ours," said Ecumenical Patriarch Athenagoras, "be the first glimmer of dawn of a shining and holy day in which Christian generations of the future will receive communion in the holy Body and Blood of the Lord from the same chalice, in love, peace and unity, and will praise and glorify the one Lord and Saviour of all."

They declared in a joint statement that they "met with the desire to fulfil the Lord's will and proclaim the ancient truth of the Gospel confided to the Church."

During his tenure, Vartholomeos has done much to advance dialogue between the two Churches as well as with other Christian confessions, including Protestant.

He has also fervently pursued inter-faith dialogue, particularly with the Muslim and Jewish faiths.

In addition, Vartholomeos has made protection of the environment as a religious and universal duty a top priority of his ministry, organising many conferences on environmental issues during his tenure. A segment of the US and international media have referred to him as the “green patriarch”.

This month marks the 30th anniversary of Vartholomeos’ enthronement as Ecumenical Patriarch and his pastoral visit will have a celebratory tone, even as he explains to his Greek-American flock his intentions regarding the new Charter of the Orthodox Church of America, which is expected to bring about a centralisation of the church administration under Archbishop Elpidophoros of America.

Elpidophoros said that Vartholomeos during his contacts in Washington will stress the religious freedom of the Patriarchate and Ankara’s refusal to re-open its Halki Theological Seminary, which the Turkish state shut down a half century ago, in 1971. Patriarchs (including Vartholomeos) and some of the most distinguished archbishops and bishops of the Greek Orthodox Church were trained at the seminary for nearly 130 years.

During his 30-year ministry Vartholomeos has made the re-opening of the Halki Seminary a personal crusade, briefing and requesting the support of US presidents and many world leaders.

He has also managed to bring intense media attention to the issue over the years, including a notable interview with the American television news magazine “60 Minutes”.

Turkish President Recep Tayyip Erdogan has at times over the years pledged to Vartholomeos that he intends to open the seminary but has never followed through.

The meetings with American officials come at a time that US-Turkish relations are at rock bottom and in a period when the Ecumenical Patriarchate has been besieged by the attacks on all levels of the Patriarchate of Moscow, which cut off communion with the Church of Constantinople over the latter’s granting of autocephaly (independent status) to the Orthodox Church of Ukraine, over which Moscow had jurisdiction for centuries.

The Patriarch in 2019 signed a "tomos" or decree officially recognising – as is his canonical right - an independent Ukrainian Orthodox Church.

Ukrainian President Petro Poroshenko attended the signing of the tome in Istanbul, thus fully reflecting the deep political implications of the move.

In statements upon his arrival, Vartholomeos expressed the enormous importance of his American flock, not least in working to defend and bring international attention to violations of the basic rights of the patriarchate by Turkey.

“With a heart filled with gratitude and great enthusiasm, we speak words of blessing and benediction for all of you, and for the great American Nation. It has been twelve years since we last visited the Holy Archdiocese of America, her devout clergy and the many friends in government that have become close to us during our thirty-year Patriarchal tenure,” Vartholomeos said.

“We begin again, as we did in 1997, and we come with the same message we imparted on that day, October 19: We come to you in love, beholding you as the newly planted branch of the ancient vine of Christ’s first called disciple Saint Andrew. You, our most beloved daughters and sons, have transplanted the faith of the Apostles upon this blessed continent. America recognises your deep commitment to living that faith fully, for she has enshrined in her Constitution the fundamental principles upon which the lasting qualities of the Church are founded.”

“Yesterday, we celebrated in the Queen of Cities (Constantinople) the thirtieth anniversary of our election to the See of the First-Called Apostle Andrew. Not many days hence, here in America, we will mark the thirtieth anniversary of our enthronement upon the Cathedra (patriarchal throne) of Saints Gregory the Theologian and John Chrysostom (both major Christian theologian and patriarchs of Constantinople).

Elpidophoros warmly welcomed the Ecumenical Patriarch’s arrival in a tweet yesterday: “It is a profound blessing and an unspeakable joy that we welcome our spiritual father, His All-Holiness, Ecumenical Patriarch Bartholomew to America. We look forward to the ways he will show us a renewed and inspired vision of our faith during this Apostolic Visit.”

In its 2020 Report on Religious Freedom worldwide, the US State Department outlined a series of violations of the Ecumenical Patriarchate’s religious freedom as it does each year, from Ankara’s refusal to allow the re-opening of its Halki Seminary to church property expropriated over many decades, as well as the decision to turn two of the greatest symbols of the Eastern Orthodox Church, the sixth century imperial and patriarchal Church of Hagia Sophia and the 14th century Chora Monastery Church, from museums, which they became under the rule of Kemal Ataturk, to mosques. Both are UNESCO World Heritage Monuments.

“The government continued to restrict efforts of minority religious groups to train their clergy, and the Greek Orthodox Halki Seminary remained closed. Religious minorities again reported difficulties opening or operating houses of worship; resolving land and property disputes and legal challenges of churches whose lands the government previously expropriated; holding governing board elections for their religious foundations; and obtaining exemptions from mandatory religion classes in schools,” the report noted.

“In July, President Recep Tayyip Erdogan reconverted Istanbul’s Hagia Sophia Museum, originally an Orthodox church that was subsequently converted to a mosque and then a museum, into a mosque and declared it open to Islamic worship. In August, President Erdogan similarly ordered the reconversion of the Kariye (Chora) Museum to a mosque,” it underlined.

Vartholomeos is scheduled to receive an honorary degree from the University of Notre Dame in recognition of his dedication to Orthodox-Catholic Dialogue.

Vartholomeos is scheduled to receive an honorary degree from the University of Notre Dame in recognition of his dedication to Orthodox-Catholic Dialogue.

“Ecumenical Patriarch Bartholomew is one of the world’s most eminent and courageous religious leaders, and we are deeply honored that he will visit Notre Dame and receive an honorary degree,” Notre Dame President, Reverend John L. Jenkins said. “The spiritual leader of Eastern Orthodox Christians worldwide, he has been an inspiration for all humankind, especially on the themes of environmental care, support for migrants and religious liberty. The University of Notre Dame warmly welcomes His All-Holiness as a brother in Christ," the university's announcement stated.

He will also officiated at the religious ceremony of the “opening of the doors” at the Greek Orthodox Saint Nicholas National Shrine at Ground Zero in Manhattan, which will serve as a place of prayer, reflection, and hope at the site unspeakable tragedy.

TANEA Team 24 Οκτωβρίου 2021 | 06:33
Share
Δείτε επίσης
Περισσότερα άρθρα για Αγγλική έκδοση
The virus recognises no geographical borders Editorial: Nobody is safe
Delays and foot-dragging have long led even to the denial of justice Editorial: Expediting justice
Erdogan’s insistence on keeping interest rates low led him to fire three central bankers Editorial: Turkey’s lonesomeness
Turkey traditionally exports its domestic crises Editorial: Turkey's domestic, foreign crises
Nobody has the right to deny their share of responsibility in the common effort Editorial: Joining forces to confront the pandemic
Of intubated patients, 83 percent are unvaccinated or partially vaccinated EODY: 105 COVID-19 deaths, 7,287 infections confirmed in the last 24 hours, 608 intubated
We must continue to insist that the state is obliged to be citizen-friendly Editorial: 'Guinness World Record'
Behind Lukashenko stands Putin, who backs and assists him Editorial: European sovereignty
The pandemic is an issue of life and death, and the protection of public health is a common aim Editorial: Consensus on managing the pandemic, even at the last minute
The measures announced are tantamount to an at least partial lockdown on the unvaccinated Mitsotakis announces partial lockdown on unvaccinated citizizens, tougher enforcement
Greece accuses Sanchez of ignoring EU decisions after agreement to sell aircraft carrier to Turkey
Anti-vax lawyer arrested for dissemination of fake news on COVID-19, then released
Adjustment to contemporary conditions and conceptions is necessary Editorial: Modernisation of the Church
KINAL is nearly or even over ten percent in all opinion polls Editorial: Opportunity for the Greek centre-left
Suspension of Najla Mangough: What Does it Mean?