Turkish President Tayyip Erdogan announced his intention while on a visit to the occupied territories in July for celebrations marking the 47th anniversary of the invasion. 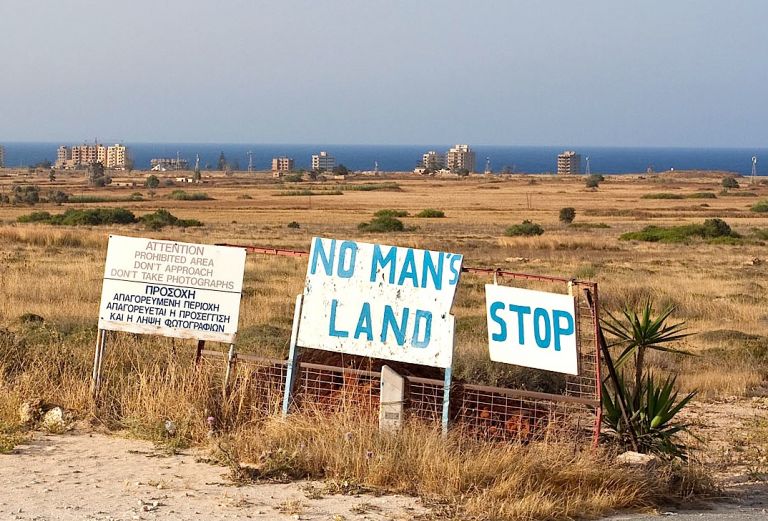 The Republic of Cyprus is turning to the permanent members of the UN Security Council (UNSC) – China, France, Russia, the UK, and the US – to brief them on Turkey’s moves on the ground to re-open of the fenced-off seaside resort of Varosha (part of  the city of Ammochostos) in the Turkish-occupied area of the island, in violation of UNSC resolutions.

At the time of the 1974 Turkish invasion and occupation of of 37 percent of Cyprus’ territory – Turkey maintains over 40,000 troops on the island to this day - Ankara had fenced off the city, which initially was to be a bargaining chip in negotiations for a Cyprus solution.

Since then, the UNSC issued a resolution providing for the handover of Varosha to the United Nations Peacekeeping Force in Cyprus.

Christodoulidis, said that both he and President Nicos Anastasiades are in the process of briefing EU partners and international players regarding yesterday’s launch of works for the implementation of Turkey’s opening of part of the city, which until 1974 was the jewel in the crown of Cyprus’ tourism sector.

Turkish President Recep Tayyip Erdogan announced his intention while on a visit to the occupied territories on 20 July, 2021, for celebrations marking the 47th anniversary of the invasion, which left 200,000 Greek Cypriots who were uprooted and became refugees in the free territories.

France, as President of the UN Security Council at the time, issued a presidential statement on 23 July, 2021, condemning Turkey’s stated intention as a glaring violation of UNSC resolutions on Varosha and called for an “immediate reversal” of the decision. The UN issued the following press release on the statement:

“The Security Council condemned today the 20 July announcement by Turkish and Turkish Cypriot leaders on the further reopening of a part of the fenced-off Varosha area in Cyprus, calling for the immediate reversal of that course of action and for the reversal of all steps taken on Varosha since October 2020. In a presidential statement presented by France, Council President for July, the 15-member organ reiterated that any attempt to settle any part of Varosha by people other than its inhabitants is inadmissible. It expressed regret over those unilateral actions that run contrary to previous Council resolutions and statements.”
“The Council went on to stress the importance of full respect and implementation for its resolutions, including the transfer of Varosha to United Nations administration, and of respect for freedom of movement for the United Nations Peacekeeping Force in Cyprus (UNFICYP)”.

Christodoulidis said that the issue of Varosha is on the agenda of the upcoming meeting of EU foreign ministers.

He also underlined that the resignation of the coalition government of the occupation regime, on October 13 when it lost its parliamentary majority, will not affect the prospects for a resumption of Cyprus settlement talks, which have stalled mainly due to the insistence of Ankara and the Turkish Cypriot side on a two-state solution, with two separate sovereignties, in violation of countless UN resolutions and of the agreement between the two sides over the past four decades.

TANEA Team 14 Οκτωβρίου 2021 | 17:16
Share
Δείτε επίσης
Περισσότερα άρθρα για Αγγλική έκδοση
Meetings with President Katerina Sakellaropoulou, Archbishop Ieronymos Pope Francis to visit Cyprus, Greece in December
Evangelos Marinakis on CPLP’s bond listing at the Athens Stock Exchange: “Green investments are the future”
Washington concerned about religious freedom of the patriarchate in Turkey Vartholomeos has one-hour meeting with Biden: Religion, rights, and geopolitics on US visit
What a great thing it is to be fighting for your life even as you battle for the common good! Editorial: Standing tall
It is the greatest foreign policy crisis in Erdogan's 19 years in power Following domestic, international uproar Erdogan backs off on expulsion of 10 Western ambassadors
The UN Secretary has warned that humanity is already in a state of emergency Editorial: A duty towards our children
'The UK played a decisive role in achieving Greece’s independence' FM Nikos Dendias: Greece-UK bilateral cooperation agreement to include defence and security issues
Vartholomeos has fervently pursued inter-faith dialogue with the Muslim and Jewish faiths Religion, rights, and geopolitics on Vartholemos' US visit, meetings with Biden, Blinken, Pelosi
At Greek universities progress is battling regression. Editorial: Two worlds
Editorial: Opportunity
Angela Merkel – In Athens on October 28 and 29
If the pandemic is checked, we can hope for much better days Editorial: Turning point for Europe
Record-breaking over-subscription for CPLP bond issue
We have a duty to ensure for families a network of protection in our schools. Editorial: Maintaining balances
We have the power to leave behind this unprecedented crisis. Editorial: Exiting the pandemic